It is a fine Lakeland walk from Mardale Head to High Street but it starts with a tone of melancholy. A noticeboard reminds us that the village of Mardale Green, with houses, church and pub, was submerged when the Haweswater Reservoir was constructed. However, that sad event – sad to the ex-residents of Mardale Green anyway – happened in 1935, so it would be a very elderly walker who had personal memories of it today.

A second notice advises those who have come to see the eagles that they are too late. The eagles have gone – which is indeed rather sad. Palmer (1930) said that “Martindale was the last nesting haunt of the golden eagle south of the Border. About eighty years ago the last bird was shot, and there has been no resettlement.” However, about a hundred years after that eagle was shot – that is, in the 1950s – golden eagles began to be seen again in the Lake District. In 1969 a pair managed to breed in Riggindale, below High Street. Since then the nest had been sustained by a series of male and female eagles, producing sixteen young. Unfortunately, after 2004 the returning male eagle was unable to attract a mate. Even more unfortunately, he has not been seen since 2015 and is presumed to have died.

The chances of golden eagles returning again to the Lake District are not high at the moment. Although there are about 500 pairs of golden eagles in Scotland only a very few of those breed south of Glasgow. There is a programme to increase the numbers of golden eagles in southern Scotland by re-introducing up to ten eagles a year in the Moffat hills. It is hoped that some of the eagles will be able to run the gauntlet of moors for grouse-shooting in the Scottish borders and English uplands and drift south to establish territories in northern England. However, experts apparently consider that there is a shortage of suitable terrain and food – but eagles did manage for decades in Riggindale, which seems similar to several other dales to me. Anyway, for now, walkers will look wistfully and forlornly around the Riggindale crags and in the skies above in search of a golden eagle.

Enough negativity. There is plenty still to be enjoyed on this walk. We walked up to Blea Water, to see it at close quarters for the first time (previously we had only peered down at it from the heights of Mardale Ill Bell and High Street). On the way we passed many recently-planted trees, a welcome attempt to return some of the over-sheep-grazed grass and bracken slopes to a more natural habitat. Blea Water is one of the finest of Lakeland tarns, enclosed on three sides by the steep cliffs of Blea Water Crag, High Street and Riggindale Crag. It is said to be 61 metres deep – and I could well believe it – which is deeper than all the Lake District lakes except Wastwater and Windermere. We met a team from United Utilities who were contemplating removing the small dam, which serves no function and is a bit of an eyesore. The word ‘blea’, incidentally, comes from an Old English word meaning blue or dark, which I suppose Blea Water is, but it was also sparkling like a dewdrop in fresh May sunshine. 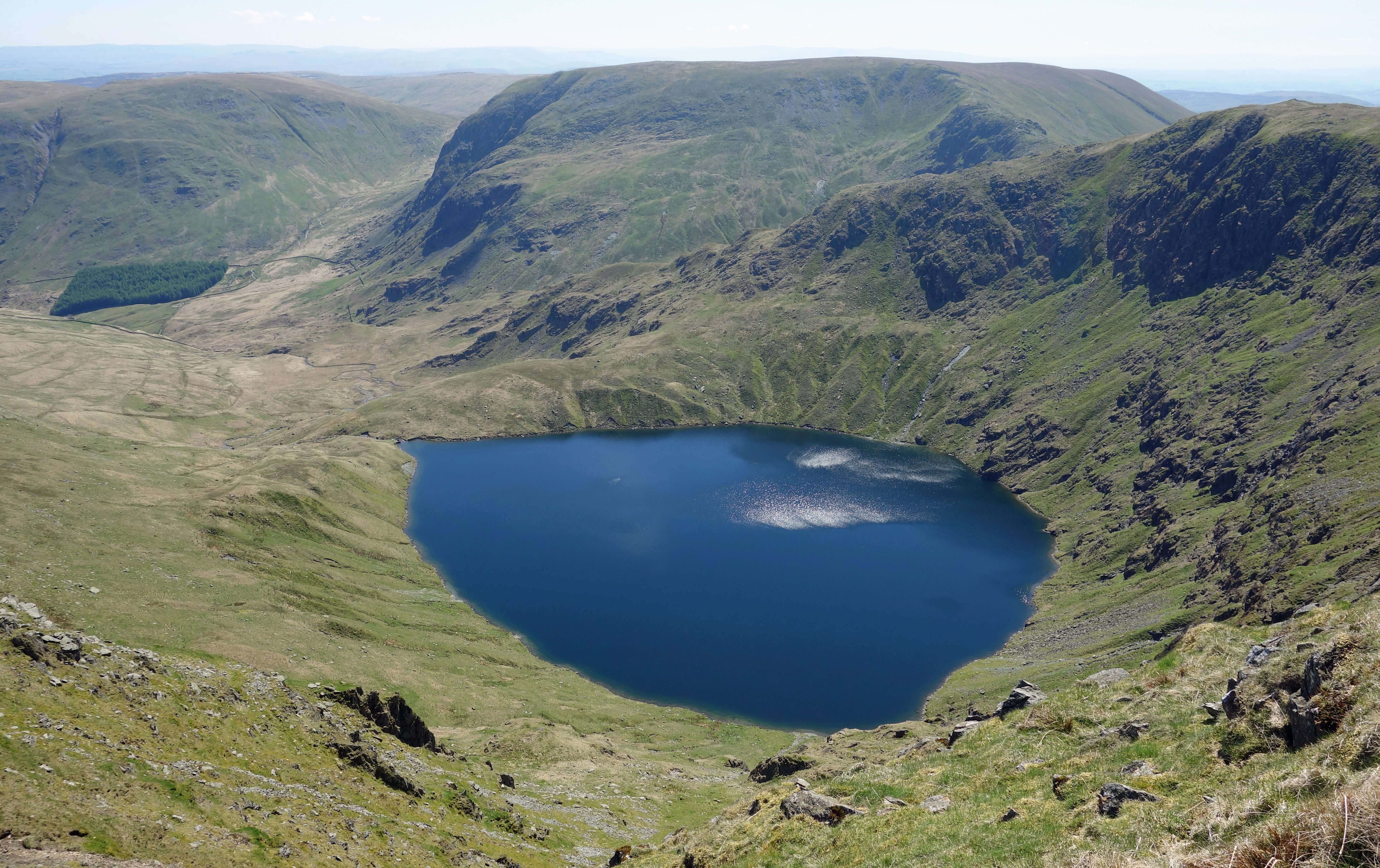 We clambered up the Long Stile ridge to High Street (828m), which is by far the best way to approach it. High Street itself is, let’s be honest, a little dull, unless you have a vivid imagination and can see Romans marching along their road or horses galloping on Racecourse Hill. But emerging from Long Stile you suddenly see a wide panorama of all the great Lakeland peaks: from left to right, Coniston Old Man, Crinkle Crags, Bowfell, Scafell Pike, Great Gable, Fairfield, Helvellyn, Skiddaw, Blencathra. Only the High Street range presents all the classic peaks ahead of you. Admittedly, they are a little distant but they have to be in order to fit them all in. It is inspirational to see them all arrayed ahead, especially on a clear day such as this was. I can hardly wait to visit them again during the course of these Saunterings.

We admired the view for some time before setting off down past Kidsty Pike. The view from Kidsty Pike suffers by comparison with the High Street view. Kidsty Pike is the prominent pointed peak seen from the M6 and you would expect that, in consequence, it provided a good view to the east – and indeed it does, of the Cross Fell Pennines, the Shap Fells, the Howgills and some of the Yorkshire Dales peaks. These too are all within my Saunterings scope! And on the walk down and at closer quarters there’s a fine prospect of Haweswater.

Back at the car park we met the United Utilities team again. I hope I’m not giving away any company plans by saying that the main problem they foresaw in removing the dam was getting rid of all the concrete. They reckoned it’d take a hundred helicopter trips to lift it all out! Quite why United Utilities would pay to do this I don’t know but I hope that they do return Blea Water to its natural state. I am sure that they won’t be tempted to just tip all the concrete into the depths of Blea Water. It would hardly be in a natural state then, would it?


&nbsp13.   The Cairns of Grisedale Pike
&nbsp11.   The Struggle over Boulsworth Hill
A list of all Saunterings so far