14. &nbspLogging Along the Cam High Road 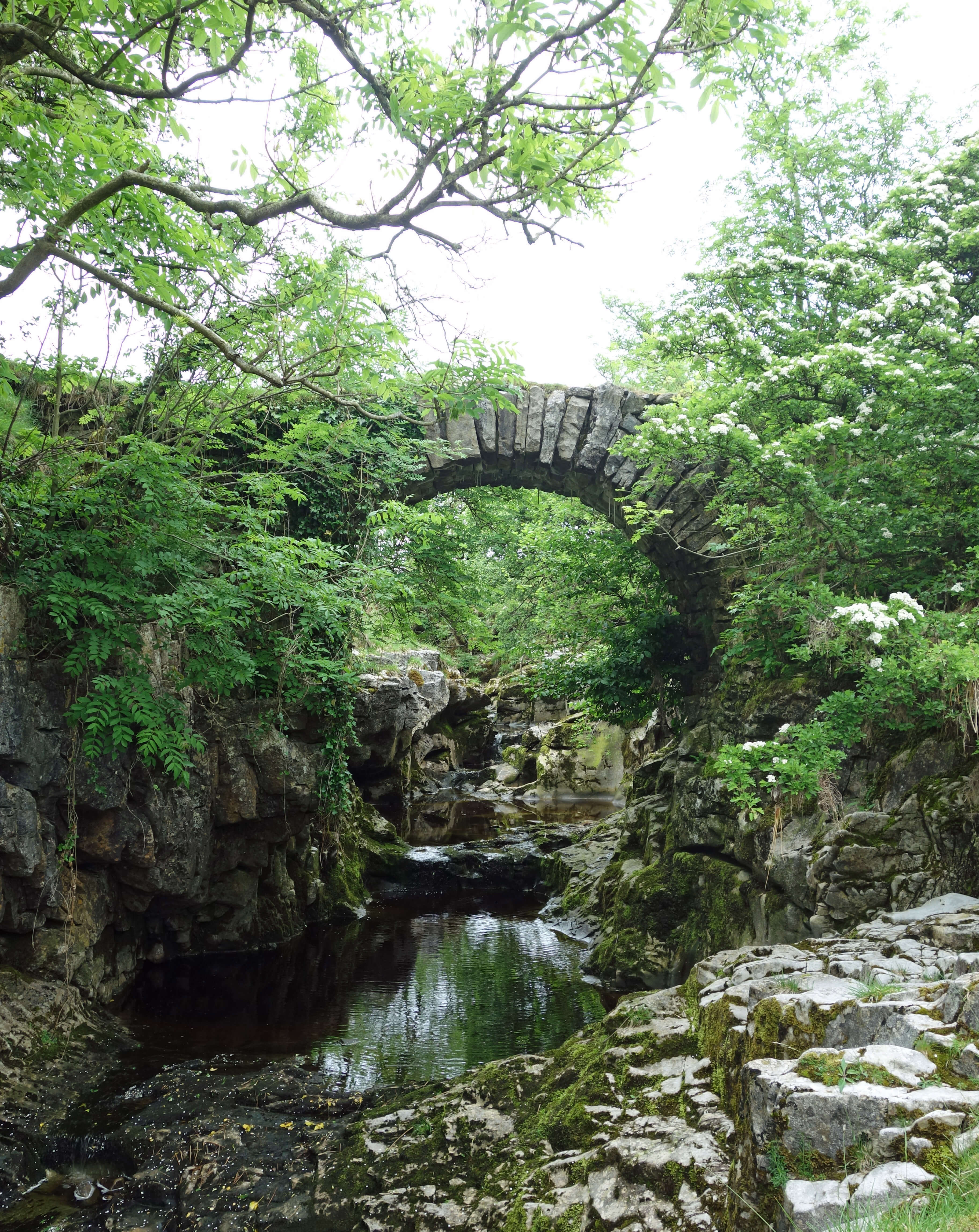 Should the Cam High Road be made a proper road? Is it fit for purpose in the 21st century? The answer depends, of course, on what its purpose is deemed to be. However, before tackling that question I treated myself to a detour. I walked to Thorns Gill, within which flows the infant River Ribble, in order to see the splendid little bridge with a narrow arch perched across a mini-gorge. If fairies lived then they would surely live here. I continued alongside the beck past various small waterfalls, by many dark, deep pools, and by Katnot Cave, where gushing water could be heard but not seen.

And then out on to the open moor to walk up the Cam High Road. It is a track that runs for about ten miles, reaching a height of nearly 600 metres, between Bainbridge in Wensleydale and Gearstones at Ribblehead. It is on the line of a Roman road between the camp at Bainbridge and camps to the south, such as Ribchester in the Ribble valley near Blackburn. It is therefore a track of considerable vintage. 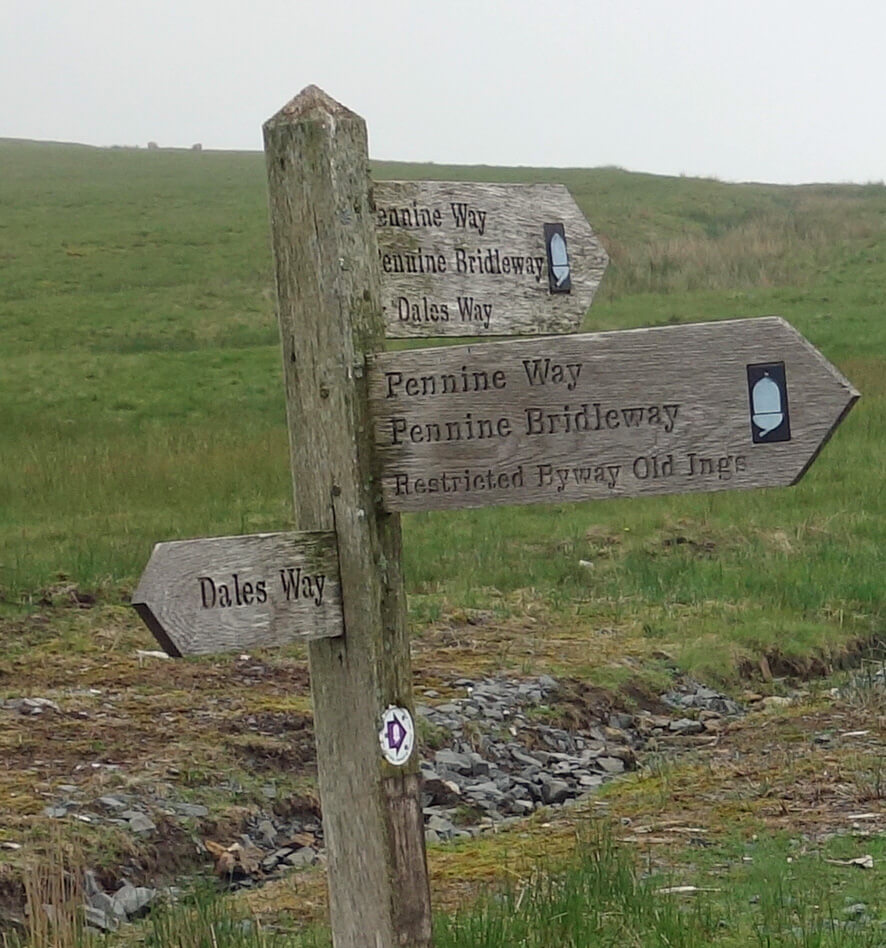 In 1965 the Cam High Road between Cam End and Kidhow Gate became part of the Pennine Way, EnglandÆs first Long-Distance Path. Later it also became part of the Dales Way and the Pennine Bridleway. In the early 21st century, the walkers and horse-riders on these paths began to be accompanied by ægreen-laningÆ motor-cyclists and drivers of 4x4s. A ægreen laneÆ is not a legal term but is generally understood to mean an unsurfaced, public byway used for recreational purposes. After some controversy, a Traffic Regulation Order deemed that the Cam High Road is not a green lane and hence this absurd activity û flaunting off-road vehicles, damaging the track, and annoying track users on legs û is no longer allowed there.

The Cam High Road faced a new challenge in 2011. Forty years before, thanks to generous tax concessions, land owners had planted coniferous forests at Cam Woodlands and Greenfield Forest, to the east of the Cam High Road. Now the time had come to harvest this crop of timber. It seems that, in the hurry to profit from those tax concessions, not much thought had been given to how this harvesting might be done. There is a narrow, winding road from Cam Houses north to Gayle but instead permission was sought to use the more direct Cam High Road south to enable huge timber trucks to get to and from the forests. Extraction work began in 2011 but was immediately halted when the historic track was seen to be damaged. I understand that some agreement was reached to allow the felling to continue but whether this involved work on the Cam High Road or the road to Gayle I am not sure.

I thought IÆd walk up to see how the Cam High Road and the trees of Cam Woodlands and Greenfield Forest were getting on. On the way up I was passed by a van with æKomatsu Forest QualityÆ on its side. So forestry work was on-going and vans did use the track. I could not, however, believe that timber trucks could use it, as the track was much as I remembered it, being somewhat eroded in places, although it is perhaps wider and more stone-surfaced than it was, creating a more visible scar on the hillside. I walked on up but sadly, at about 500m, I met the cloud coming down. I reached West Gate where a sign warned of operations being carried out by K.R. Dodd Forestry û but I could see nothing of them. I could not see the trees for the cloud and therefore, sorry, I cannot report on how the timber extraction is progressing.

I strained my ears to hear any sound of work but all was silent. Actually, I became more aware of the sounds, now that I could see so little. The clouds hissed over the grass. I heard the occasional morose sheep somewhere out there. I heard curlews but now with only snatches of their early spring burble, or just a staccato beep-beep-beep, or sometimes an even more staccato five-beep version. I heard lapwings, also less flamboyant than earlier in the year. I disturbed two golden plover before they could treat me to the plaintive whistle that would so suit the conditions. I did not hear any grouse, even though I passed several grouse butts. They were all dilapidated apart from one line of butts that had recently, if optimistically, been re-furbished. This line ran across the Dales Way. Are walkers and shooters compatible?

The dominant sound, however, was that of the skylark. Its song was like a continuo throughout the ten-mile walk, as I could hear one or more skylarks for almost every step of the way, even in the cloud. A recent radio item reported that half the people surveyed had never heard a skylark. This was presented as evidence that skylarks arenÆt about as much as they used to be. It might also be evidence that people donÆt get about as much as they used to.


&nbsp15.   On the Hobdale Fence
&nbsp13.   The Cairns of Grisedale Pike
A list of all Saunterings so far