I set off to walk from Colne up Boulsworth Hill, following in the footsteps of mill-workers of over a century ago. Colne was the birthplace in the 1890s of the Co-operative Holidays Association (CHA), a fact that will not mean much to most ramblers of North-West England today. We have been led to believe that we owe our modern right and keenness to walk on the mountains and moors entirely to the influence of William Wordsworth and fellow poets of the Lake District. It was they who changed our cultural perception of mountains. No longer should we regard the mountains with trepidation but we should walk upon them in order to appreciate their lustrous scenery. So pervasive was Wordsworth’s influence that for a time the region was commonly called Wordsworthshire.

Boulsworth Hill from near Trawden, on the way from Colne

It was different in the Pennines. By that time, the 19th century, millions of working people had moved from rural areas to live and work in the grit and grime of industrial cities such as Manchester and Sheffield. They could not just up sticks and move to the Lake District and spend days walking around it, as Wordsworth and friends did. However, many of those workers felt an equal, if not greater, need for fresh open air and fine scenery – and probably appreciated it as much even if they didn’t write poems about it. The many ‘rambling clubs’ that formed in industrial cities to help worker-walkers into the countryside emphasised fellowship – the chance to walk and talk with others away from the noise of factories – rather than wandering lonely as a cloud. This communal aspect was the foundation for the famous mass trespasses that played a key role in changing access legislation (eventually). 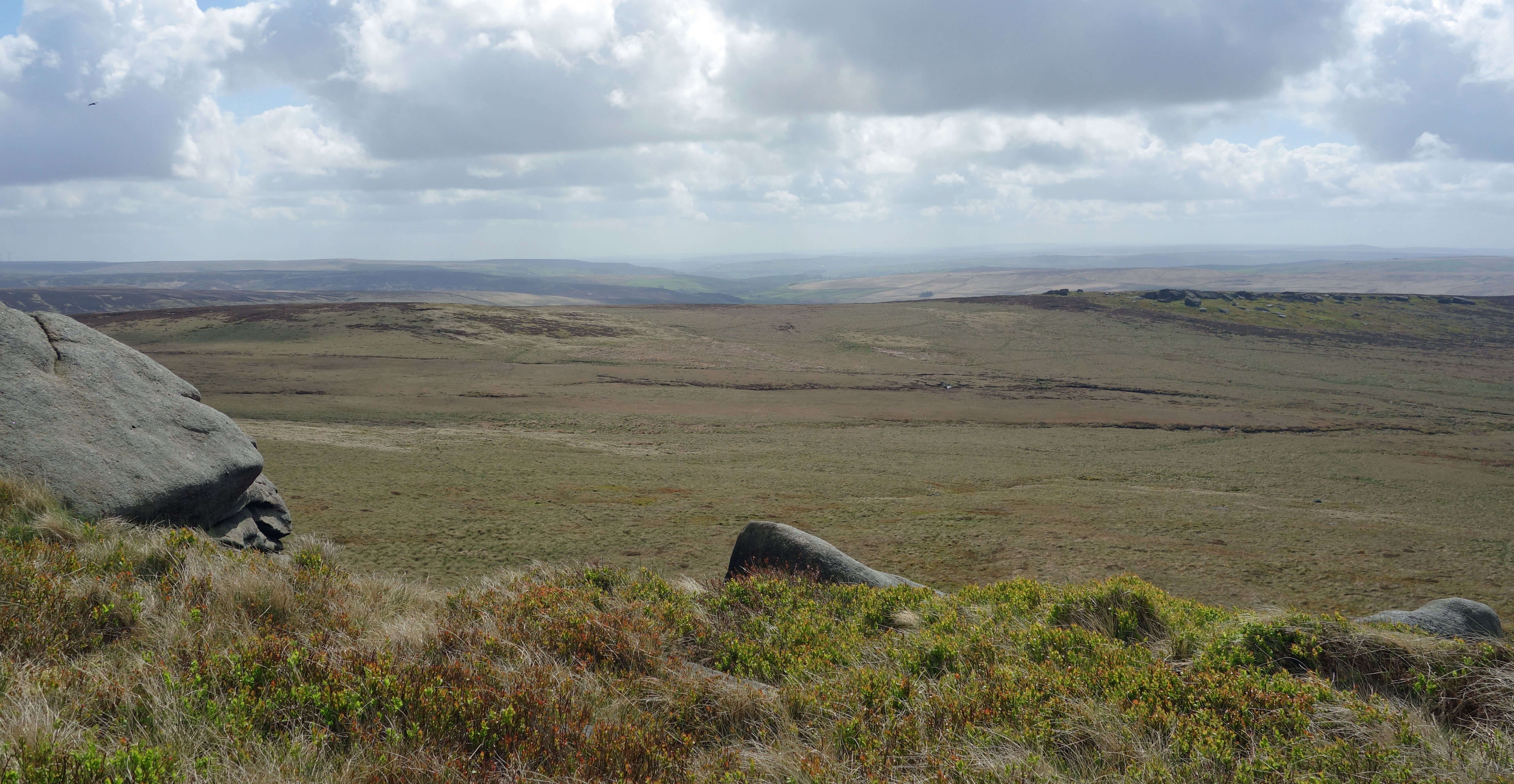 The CHA was a leading player in this movement but with a slightly different emphasis. It welcomed male and female members, which was somewhat controversial for the time. It also had a broader aim than just rambling, providing what would nowadays be called ‘adventure holidays’. CHA was founded by Thomas Leonard, who went on to help establish the Youth Hostels Association and the Ramblers’ Association. There is, a touch ironically perhaps, a memorial to him, as a pioneer of the open-air movement, on Catbells near Derwent Water. Colne does not seem to remember Leonard at all – but then Leonard did refer to Colne as a “bleak upland township” in his memoirs.

Would-be ramblers were not asking for a new right. They were asking for the restoration of the right to walk freely on uncultivated land, on common land, and on centuries-old rights of way – a right that their ancestors had taken for granted. This right was disappearing for two reasons. First, the many Enclosure Acts had led to the consolidation of land ownership within the hands of a relatively few wealthy people. Those owners increasingly felt that, just as they wouldn’t allow anyone to walk through the corridors of their mansions, so they wouldn’t allow them to walk across their fields. Secondly, the uncultivated land that previously had been worthless – and therefore not made worth less by allowing anyone to walk on it – had now become valuable, because people were keen to pay handsomely for the fun of killing grouse and deer.

The struggle for access was extraordinarily protracted, as described by Hill (1980). The first Access to Mountains Bill was in 1884. A solution acceptable to ramblers was not found until the Countryside and Rights of Way Act of 2000. The thousands of worker-walkers were up against the ruling landed gentry, the views of which can be gauged from comments in 1932 by the Duke of Atholl, who owned 140,000 acres of deer forests. He considered the then Access to Mountains Bill to be “a crank’s measure, which would injure farming, sport [by which he meant deer-killing], and rateable values” and that “there was not the slightest desire on the part of the general public to go on these hills”.

Concessions were extracted like very reluctant bad teeth. Moor owners might concede access – but only outside the nesting and shooting seasons – which they then defined to be almost the whole year. Sometimes there was a ludicrous aspect to the proposed access agreements. For example, a proposal for access to Rombalds Moor, which includes Ilkley Moor, included a clause that there must be no singing on the moor. If there is one moor that we should be allowed to sing on then it is surely Ilkley Moor.

If an Access to Mountains Bill ever became an Act it was only after it had passed through lengthy parliamentary committee discussions to emasculate it. For example, the eventual 1939 Act bore little resemblance to the original Bill. It ended up providing no access rights whatsoever. On the other hand, it did somehow come to include a ‘trespass clause’ that for the first time ever in England made it a criminal offence merely to be on wild moorland. Moreover, it gave gamekeepers the legal right to demand names and addresses of anyone found there, with those refusing to give them being liable to a fine of Ł5. The legacy of this rather astonishing assumption that gamekeepers were part of the law enforcement process, and hence above the law themselves, is with us today, causing difficulties in tackling wildlife crime.

There was therefore a class and political dimension to the struggle, a dimension that did not trouble Wordsworth and his friends much. They were relatively well-to-do and no doubt mingled with the higher strata of Lake District society. The factory worker never met the Duke of Wherever who owned the local moors. As the ‘co-operative’ in CHA’s title indicates, there were affiliations with the growing labour and socialist movements. Indeed, some of the activists were known to be communists, which did not help their cause when, as in the Kinder Scout mass trespass of 1932, they were charged with assaulting a gamekeeper.

Boulsworth Hill, near Colne, is an interesting case study, as detailed by Hill (1980). Today’s OS map for Boulsworth Hill shows no green dotted lines denoting public footpaths. There never were any. There are plenty of public footpaths heading from Colne but they all end abruptly at the foot of the moor. I headed that way myself but, as Colne and Trawden have more or less merged now, it no doubt took me longer to reach open countryside than it used to.

In 1956 the councils of Colne, Keighley and Trawden, infiltrated as they were by local landowners, resisted pressure to allow access to Boulsworth Hill, arguing at a public enquiry that the public should be content to gaze at it. No doubt, some intrepid Colne walkers trespassed thereon. In 1956 they may have hoped that they wouldn’t need to trespass for much longer because the County Council was obliged under the 1949 National Parks and Access to the Countryside Act to impose an access order. It was in fact the first one ever issued. However, it took another 22 years before a path to the summit was opened, and this was on water authority land, not on land for shooting grouse. Today, of course, it is all open access land.

I walked up to Lad Law (517m), the highest point of Boulsworth Hill. Some might think that the view thereby attained is somewhat desolate. Ahead, to the south, there are dull heather moors enlivened only by occasional millstone grit outcrops (shown above). Behind, however, to the west, north and east, there are fine panoramas, although not as clear for me as they can be. Pendle was prominent, but the outline of Ingleborough was only dimly discernible and the promised sight of Blackpool Tower non-existent.

Colne and Trawden from Lad Law on Boulsworth Hill

Having conquered Boulsworth Hill and paid my respects to the pioneering trespassers, I gave myself a bonus by heading for Wycoller, a tiny, tidy village known to visitors for the ruined Wycoller Hall (which, frankly, didn’t interest me much) and three old bridges: in the order met on this walk, a ‘clam’ bridge, a clapper bridge, and a packhorse bridge. The first two of these are not that exciting to look at, being just great slabs across the beck, but the packhorse bridge is charming and skilfully built. It has two arches, a width of a mere 66cm and parapets only 25cm high. According to Hinchliffe (1994), it has survived 700-800 years. In the circumstances, I think we can forgive the slightly wonky brow of the right eye.


&nbsp12.   Uplifted by High Street
&nbsp10.   The 'Hillfort' of Addlebrough
A list of all Saunterings so far