Seventy years ago Alfred Wainwright settled at his desk, dipped his pen in the ink and began to write a description of Dove Crag, a hill to the north of Ambleside. Thirteen years and a further 213 hills later he had completed his task, to write A Pictorial Guide to the Lakeland Fells in seven volumes. This has proved to be the most significant publication about the Lake District in the last hundred years. It is acknowledged to be a work of genius, an idiosyncratic masterpiece, revered by all walkers on the Lakeland Fells.

On this walk I set out to follow his guidance for walking up Dove Crag from Ambleside, a straightforward expedition involving a long tramp north up the valley of Scandale and a return south over the ridge including High Pike. On the way I reflected upon the Wainwright Guide. Many writers have analysed the features of the Guide that have made it so successful. For a change, I will presume to mention five moans that I have about the Guide.

Ambleside was under grey cloud – better that than too much July sun. Following the helpfully-named Sweden Bridge Lane, which turns into a track, I plodded gently uphill, past quiet fields and woods until reaching High Sweden Bridge, one of the most photographed of Lakeland’s bridges. Only now did the full extent of this walk become apparent, or nearly so as the tops around Dove Crag were in cloud. High Pike towered impressively to the left and the slopes of Red Screes rose into the clouds on the right. Ahead lay the empty valley of Scandale. 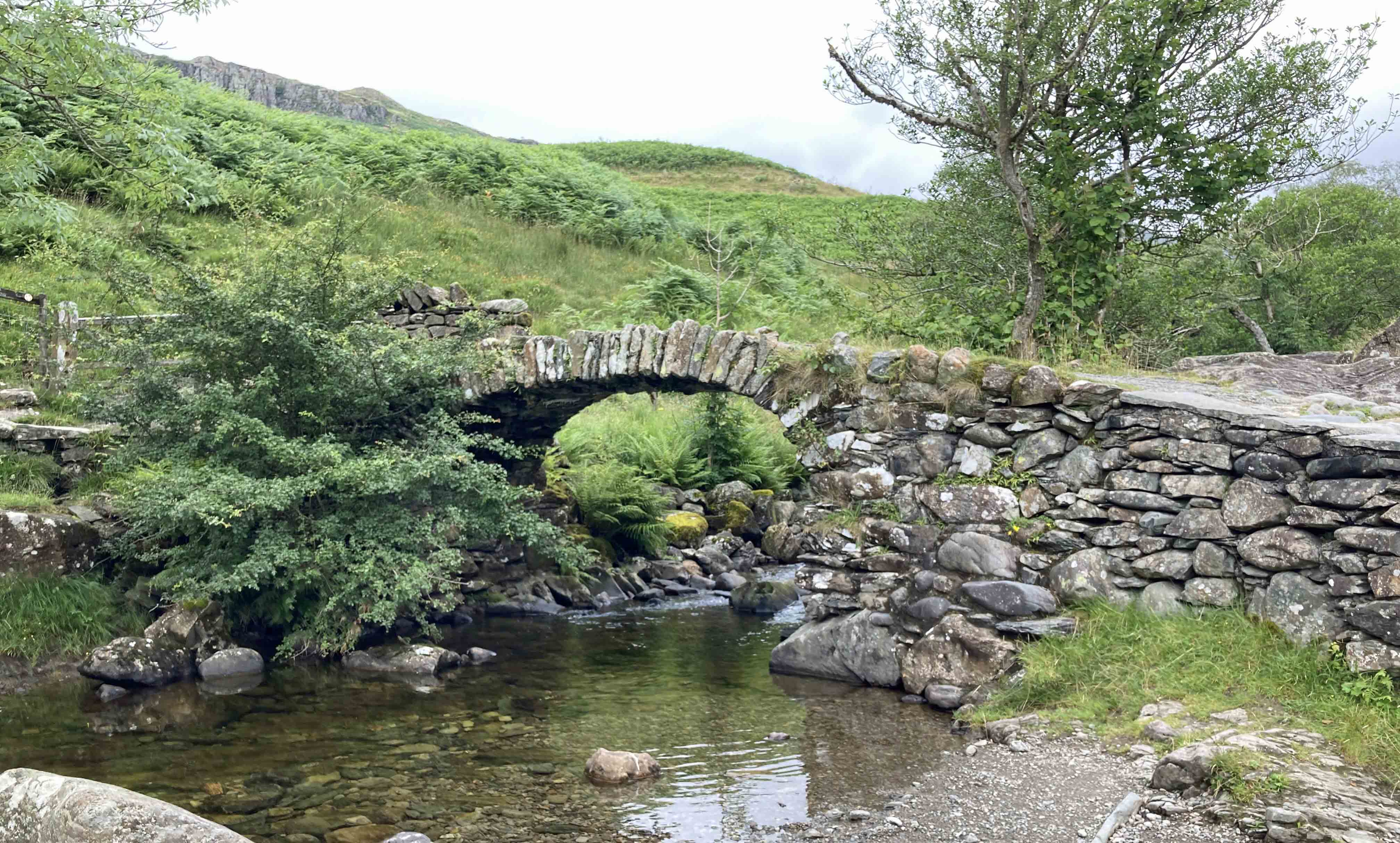 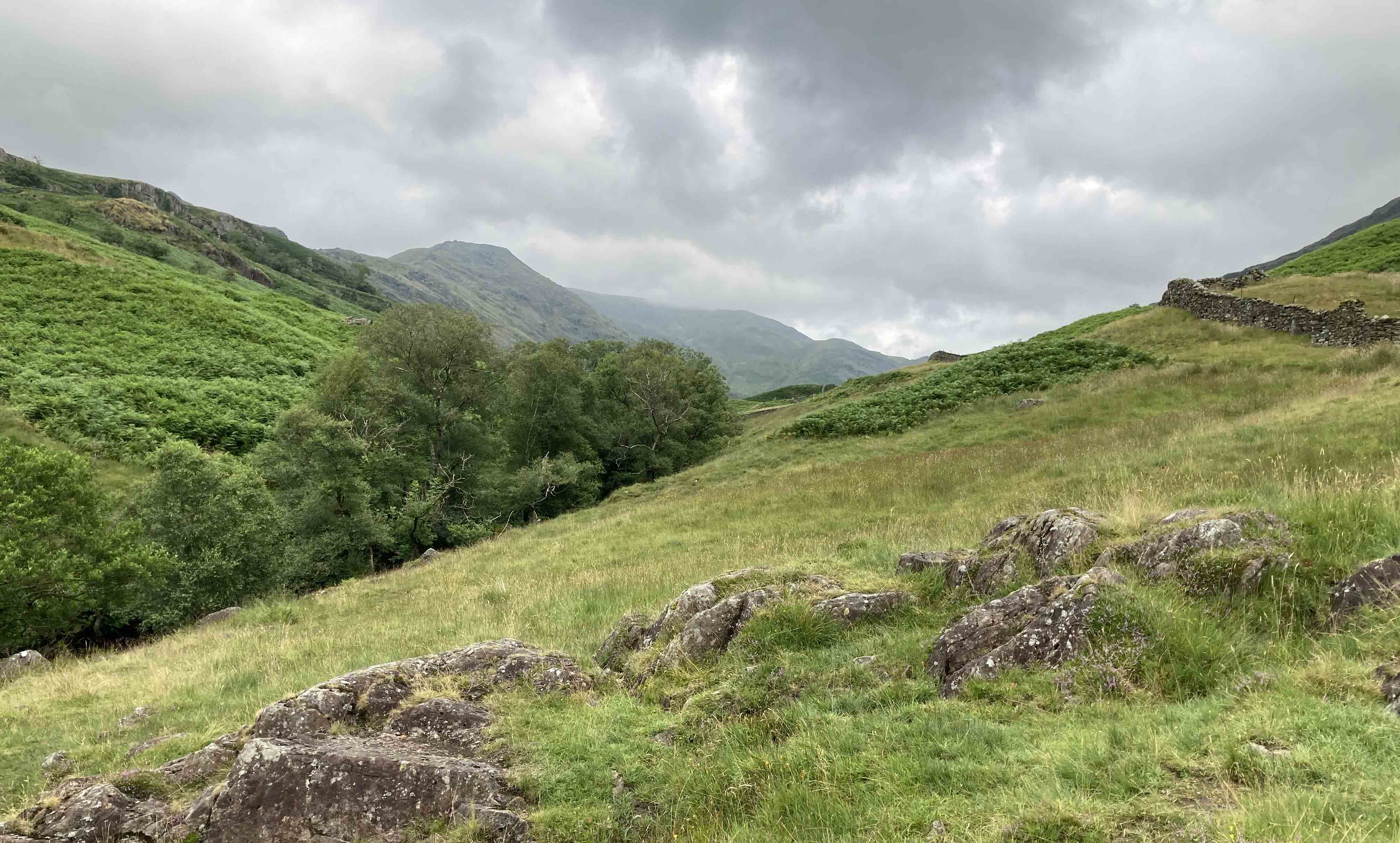 I realised that few people will walk to Dove Crag as I was, following Wainwright's advice. After battling to the top of a hill, walkers prefer not to come straight back down again but to stay among the hill tops as long as possible, enjoying the hard-earned views. Ridge walks, with relatively easy going and wide views in all directions, are particularly exhilarating, although Wainwright often found them dull. The majority of walkers to Dove Crag will be on the popular Fairfield Horseshoe walk. The Guide provides a catalogue of hill ascents rather than sensible fell-walks. This then is my:

Moan 1: The Guide implies a limited view of fell-walking. Analogies are always risky but I’ll try one. Fell-walking is like symphony-listening. You take a convoluted journey, with passages of calm, moments of heroic scrambling, periods of darkness, and some heights of emotion. Saying that there are 35 hills in the Eastern Fells and thereby encouraging walkers to walk to their tops in order to ‘bag’ them is like me saying that there are 31 peaks (that is, moments when the music reaches a significant crescendo) in Schumann’s symphonies, thereby encouraging you to specifically listen out for and 'bag' those peaks. It somewhat misses the point.

Above High Sweden Bridge my movement relaxed into a long passage with a steady rhythm. The path was clear, rising gradually and then steeply up to Scandale Pass. Along the three miles of Scandale I saw nobody apart from a farmer calling his sheep. The Red Screes slopes are not mentioned by Wainwright in the Dove Crag chapter (Red Screes is the subject of a separate chapter) so I focussed upon the ridge to the left, my return route. Clouds still swirled on the tops but I wasn’t too perturbed because, as far as I recalled, Dove Crag wasn’t difficult to navigate in cloud.

The view back down Scandale, from near Scandale Pass (with a glimpse of Windermere)

I eventually reached the col of Scandale Pass (516 metres) and wondered if it was ever much used as a pass, with the Kirkstone Pass (454 metres) being on the other side of Red Screes. The southern side of the pass (Scandale) is relatively gentle but the northern side, down Caiston Glen, is rougher. Wainwright says nothing about Scandale Pass in the Dove Crag chapter – I wondered if he said anything elsewhere in his Guide. So, my

Moan 2: The Guide has no index. All non-fiction books should have an index. In general, it is arrogant and disrespectful not to provide one. It assumes a reader will conscientiously read all the author’s words and remember where they all are. Or that a reader who vaguely remembers something will trawl back through the previously read pages. Compiling an index is not a chore – it helps to ensure consistency and that terms are discussed on their first mention.

Wainwright fans will argue that the Guide doesn’t need an index because it is not intended to be read from beginning to end and the hills are described in alphabetical order. However, that assumes that the reader knows which of the seven volumes the hill is described in. Where do we find Broom Fell, Grange Fell, Great Rigg, Hartsop Dodd and Whin Rigg? In any case, Wainwright doesn’t only write about hills. Where does he discuss Cinderdale Beck, Cust’s Gully, Moses Trod, The Shelf and Slanty Lee? I will happily buy a drink for anyone who can turn immediately to the correct page for all ten topics mentioned. [1]

I turned west at the pass, noting but ignoring Little Hart Crag to the north (that’s another separate chapter). It proved a tiring slog up by Bakestones Moss and I was relieved to reach the wide track that marks the route of the Fairfield Horseshoe. Here I had a decision to make: should I turn left to begin the descent over High Pike or turn right to the summit of Dove Crag (792 metres)? It was only a few metres higher but there is nothing of interest at the top and it was more or less in cloud, providing not much of a view.

However, I didn’t want to send the Wainwright ashes spinning, so I walked on up. In the Guide he draws a panorama of the view, showing about fifty tops. I could see only a few of them and they were just grey shapes, with little detail discernible. I wandered over to the northern edge to peer into the cliffs of Dovedale, which Wainwright preferred to the smooth southern slopes. I was particularly interested to see Hunsett Cove, about which Wainwright writes: “It is believed that Hunsett Cove was once the crater of a volcano”. Believed by whom? What was the evidence for this belief? Well,

Moan 3: The Guide has no references. It’s as though Wainwright thought that no previous writer had written anything that influenced the Guide and that readers would never need to refer to anything other than his own words. It’s impossible for any author to know enough about everything. It’s often necessary to rely on the expertise of others – in which case, it is only right that they are acknowledged and that readers are given directions to further reading on topics of interest to them. This has the advantage that if an expert’s opinion should turn out to be wrong then he or she will take the blame. As far as I am aware, nobody believes that Hunsett Cove was the crater of a volcano.

Looking north from the slopes of Dove Crag, Brothers Water in the middle (and the whole rather sunnier than I recall)

Looking east from Dove Crag to Red Screes (Little Hart Crag, shown in the photo above, is the diminutive nobble just above the patch of sun)

Duty completed, I now at last turned south. Wainwright writes that the mile to High Pike is “grass all the way”. Thanks in no small measure to Wainwright, you could probably walk the mile today without walking on grass at all. In the Dove Crag chapter Wainwright says nothing much about High Pike or the following Low Pike (they too have separate chapters). His ascent map is accompanied by only a column of text about an inch wide and two inches high. This leads me to:

Moan 4: The Guide is hand-written. I know that most people like the unique, quirky home-made style. To me, it adds little to the appeal or legibility of the text. In fact, his continued commitment to hand-written text made his later books difficult to read, especially his Outlying Fells, with its pages of dense italics (a challenge to his intended reader, the elderly walker). My real objection is that it seems a waste of Wainwright’s talents. He must have spent hours adjusting the text so that every line was right-justified, especially with narrow columns like the one for Dove Crag. His waste-paper basket must have been full. Now experts tell us that legibility is improved by not right-justifying text. Wainwright in fact began without right-justifying his text but changed his mind after six months and threw away what he had already written.

At High Pike I paused for a rest. In my weariness it seemed that Ambleside and a grey Windermere, visible ahead for some time, were reluctant to get closer. Dove Crag, although only the 39th highest of Wainwright’s 214 hills, was my highest in terms of ascent (about 750 metres from Ambleside) since I began these Saunterings and, as I sat at High Pike, looking down into the long length of Scandale, I could appreciate that I had walked some distance uphill. 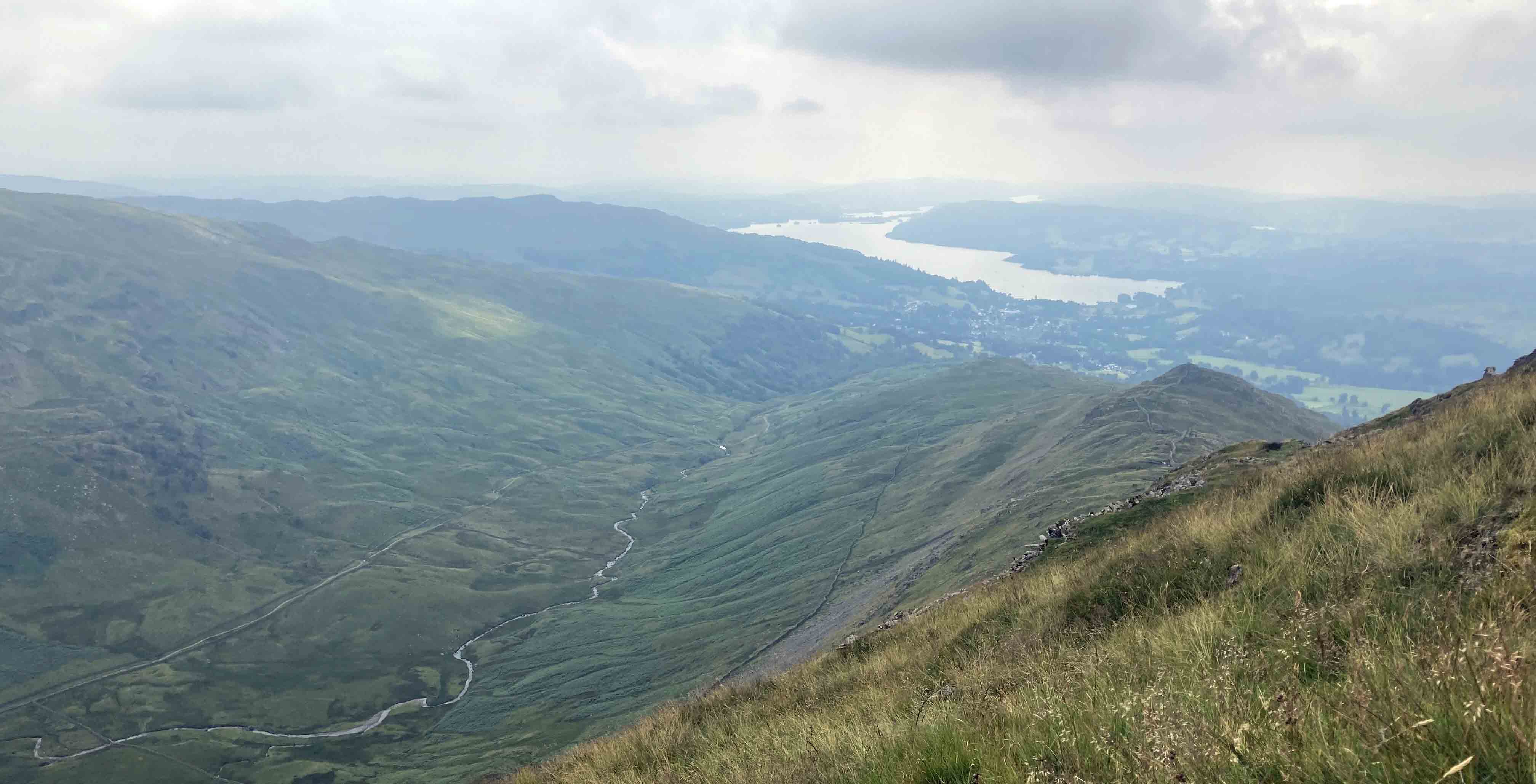 The gloomy view of Ambleside and Windermere, with Scandale below left, from my resting spot on High Pike

Wainwright’s ten-page description of Dove Crag is informative but written with a straight bat, so to speak, as indeed is the whole first volume. There are none of the asides and witticisms that, with increasing confidence, Wainwright added to later volumes. These are, of course, appreciated by readers, but sadly:

Moan 5: The Guide is misogynous. The Guide contains sexist asides about women. Some may think them harmless jokes but perhaps not if they knew what Wainwright really thought about women. Here’s what he wrote in 1938 (at the age of 31): “I wrote above of enthusiasm, of men recapturing the wild joys of boyhood. I’ve wondered many a time: have the ladies the same capacity for enthusiasm? Have they, too, somewhere within them a slumbering spark which can on occasion burst into a burning, brilliant flame and retain its intensity and heat against the cold waters of judgement and reason?… I have not yet witnessed genuine enthusiasm in one of them. Maybe their imaginations do soar sometimes, but are kept in leash and hidden. Yet I doubt it. The man burns, the woman throws the cold water over him.” [2]

Wainwright cannot be excused as a product of his time. I never heard anyone of his generation expressing similar views. And if you think Wainwright subsequently mellowed then his last book Memoirs of a Fellwanderer (1993) suggests otherwise, judging (I haven't read it) from the reviews, one of which said that there's a "gratuitously large helping of misogyny".

[1]. Wainwright famously promised a pint for all walkers completing the Pennine Way, a promise he came to regret. I will have no regrets about my promise above. Not all ten topics mentioned can be found in the Guide.
[2]. I have relied upon various websites for this quotation from Wainwright’s A Pennine Journey. I have no wish to search for such words myself.