86. &nbspBluebells and Going Round the Lune Bend

There was only one local public footpath that we had never set foot upon ľ the one on the other side of the river around the long meander below Burton Wood (mentioned in 81). Well, thereĺs no time like the present ľ and you can say that again. I have several times walked or run on the north bank of the Lune between the Loyn Bridge at Hornby and the Waterworks Bridge, but that is a long walk or run and I had always taken a shortcut across the neck of the meander to avoid making it even longer. Today we would dutifully follow the footpath, enjoying new views of the Lune valley from all angles, 360 degrees of them. 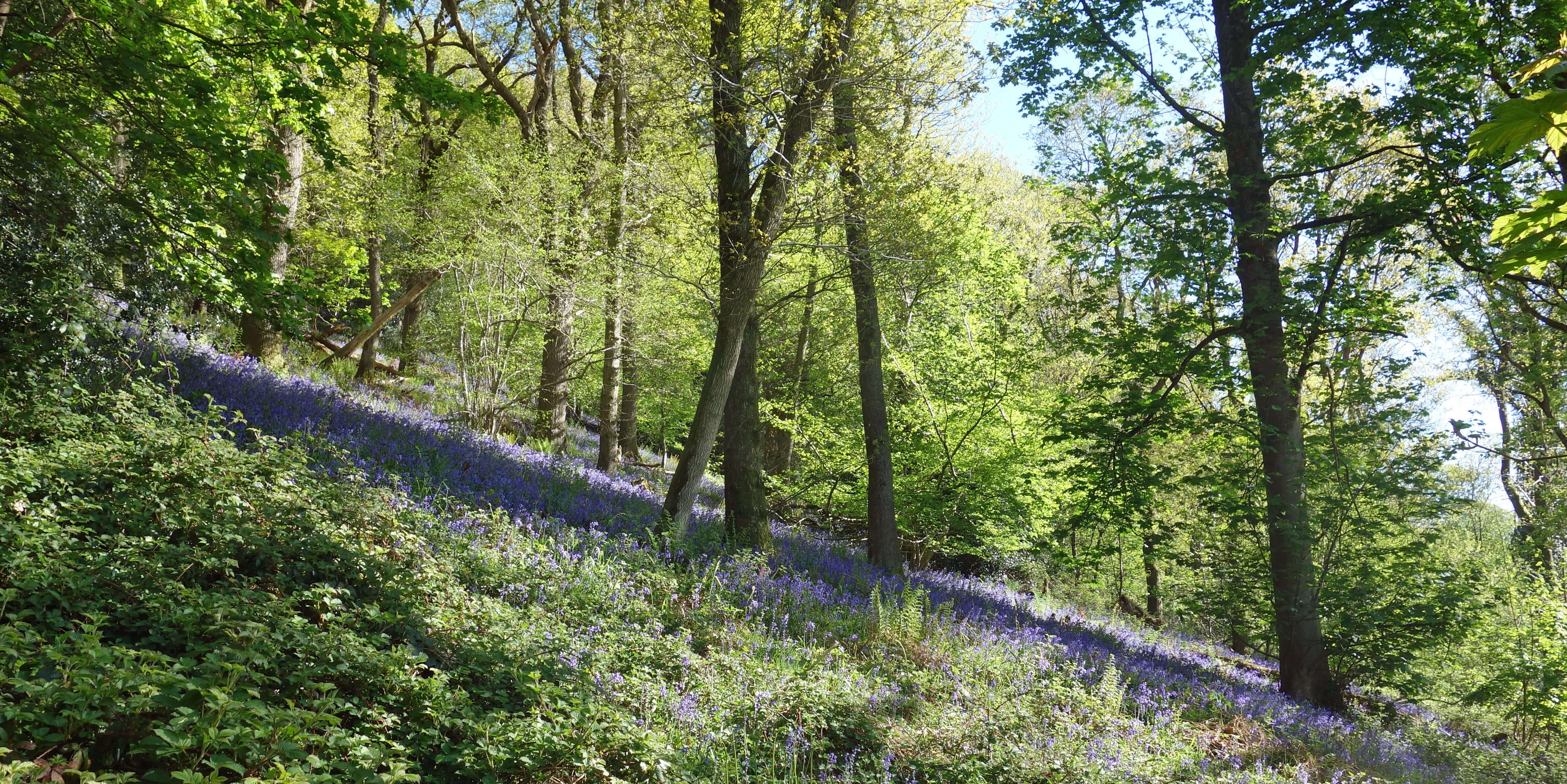 We crossed Waterworks Bridge to enter Lawsonĺs Wood and admire the bluebells. There was a fine but not the most fulsome display, we thought. The bracken, bramble and other undergrowth has advanced so much that the bluebells werenĺt in their usual isolated glory. It has not rained for two weeks and weĺve had at least ten hours of sunshine on all but one of those days, so we cannot blame the bracken and bramble for thinking it was time to get a move on. At least the bluebells are proper British ones, upstanding and deep blue, not the so-called Spanish bluebells, frilly and light blue, that are taking over our gardens. Government regulations require me to make a comment about Brexit at this point but I cannot be bothered. Oh, I already have.

We emerged from the wood to follow our new path on the opposite bank of the Lune. First, we paused to watch the sand martins circling around and in and out of about thirty tunnels where, three weeks ago, we had spotted our first sand martins (79). It was interesting to view the Lune from a different perspective. We could see ľ especially now that the river was so low ľ the extensive masonry placed in the river to protect the banks on Ĺour sideĺ from further erosion. As we walked on we saw too much Japanese knotweed, where later in the summer there will be too much Himalayan balsam (any at all is too much). We passed where the farmer boldly fords the river in his tractor and where we once, even more boldly, paddled over. We could do so now, the river being so low, but we pressed on.

Inland, the floodplain was totally quiet, apart from the birds, and totally flat, apart from some old river channels. There were extensive views to the Yorkshire Three Peaks, unobscured by the smoke that usually drifts from the Claughton Brickworks chimneys. We passed close by Over Lune Barn, which we have seen hundreds of times from the opposite side of the river, and continued on a bank, now far from the river, that may well have been the river bank 200 years ago (81). It was too warm for somnolent cows to stir themselves. At the river bend, where many large tree trunks had been deposited by floods, we took the shortcut (sshhh) back to Lawsonĺs Wood.

On the way back we saw a yellow butterfly. A brimstone? We donĺt remember seeing brimstones here before.


&nbsp87.   Around the Claughton Clay Pit
&nbsp85.   The Tarn Brook Heronry
A list of all Saunterings so far