We walked to the Waterworks Bridge ¢ again. An obvious question is: What is the bridge for? The bridge itself gives us a clue by saying ōManchester Corporation Water Works 1892ö on its side. In fact, it carries the aqueduct from Thirlmere to Manchester. This aqueduct, 153km long, is the longest gravity-fed aqueduct in Britain, supplying up to 227m litres (or 50m gallons) a day, with water flowing at a stately 6km an hour. ThatÆs slow enough for the Manchester dignitary who turned the tap at Thirlmere in 1894 to be able to get to Albert Square, Manchester in time to turn the tap there to welcome the new water. If I were that dignitary, IÆd want to do the same.

A less obvious question is: Why is the aqueduct on a bridge over the Lune and not in a tunnel? The aqueduct is obviously underground as it approaches the bridge down the slope to the north and also as it leaves the bridge across fields to the south. IÆll offer an answer later but you might like to mull over the question while we follow the route of the aqueduct across our region.

The aqueduct is not downhill all the way. It is, for example, higher on the flanks of Clougha (about 150m) than it is at the Waterworks Bridge (about 20m). The aqueduct therefore functions as a syphon, as explained in this rather good video, which features the Waterworks Bridge from 4.20. For most of its length the aqueduct is a concrete pipe within a channel over 2m deep and 2m wide, with about 1m of cover above the pipe. Some of the aqueduct requires a tunnel, for example, for 5km through Dunmail Raise. It was, of course, technically possible to tunnel under the Lune, in which case weÆd hardly be aware that the aqueduct was here. 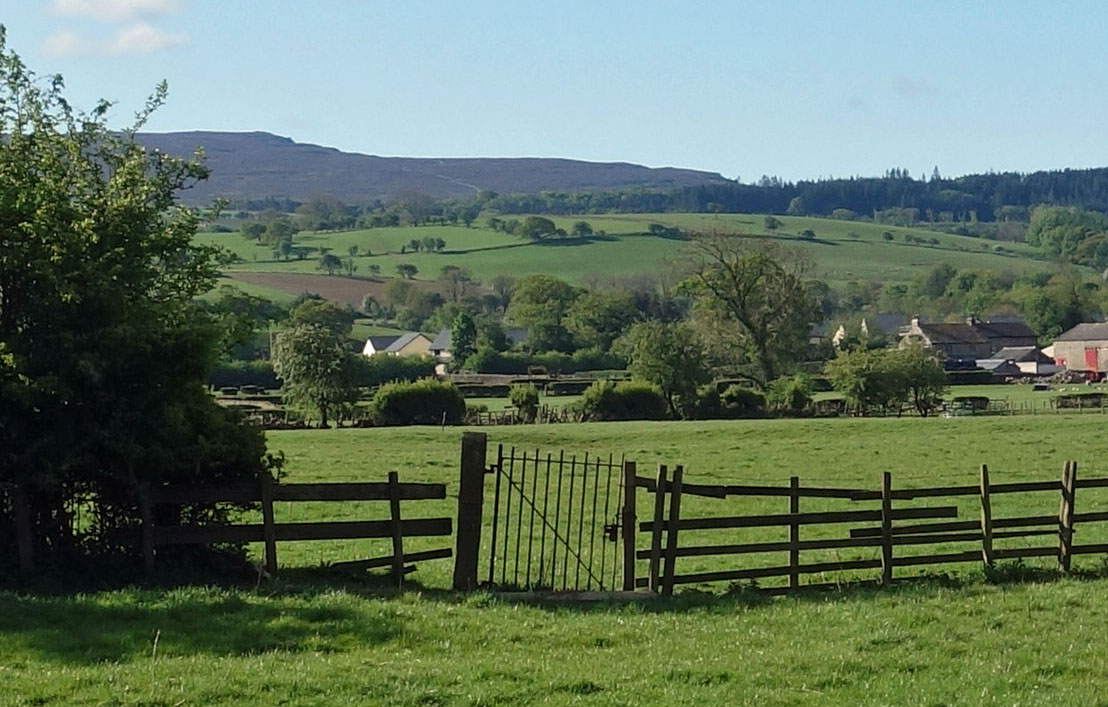 There are clearly four pipes within the Waterworks Bridge. According to one website about the Thirlmere Aqueduct, ōwhere the aqueduct route had to cross river valleys multiple pipelines were usedö, which rather implies that the water in the underground pipe was split into four to get across the Lune ¢ but IÆll express some doubts about that in a minute. The average fall of the aqueduct is 20 inches per mile. At the Waterworks Bridge, however, the pipes can be seen descending at a steep angle. This is, in fact, the steepest drop, and hence the point of greatest hydrostatic pressure (410 feet), for the whole aqueduct, with a displacing force at the angles of 54 tons. The anchoring arrangements here, then, have to be very efficient.

From the valve house on the south bank, the aqueduct heads due south for over 1km before curving slightly east. We walked on the line of the aqueduct to meet a gate in a fence (shown right). It looks like an ordinary gate but it has a distinctive style, with narrow metal bars plus diagonal and an undulating top. From the gate we can see (with binoculars) two similar gates in the hedges ahead. These gates were added not so much to function as gates but to enable engineers to follow the line of the aqueduct. They enable us to do the same today. 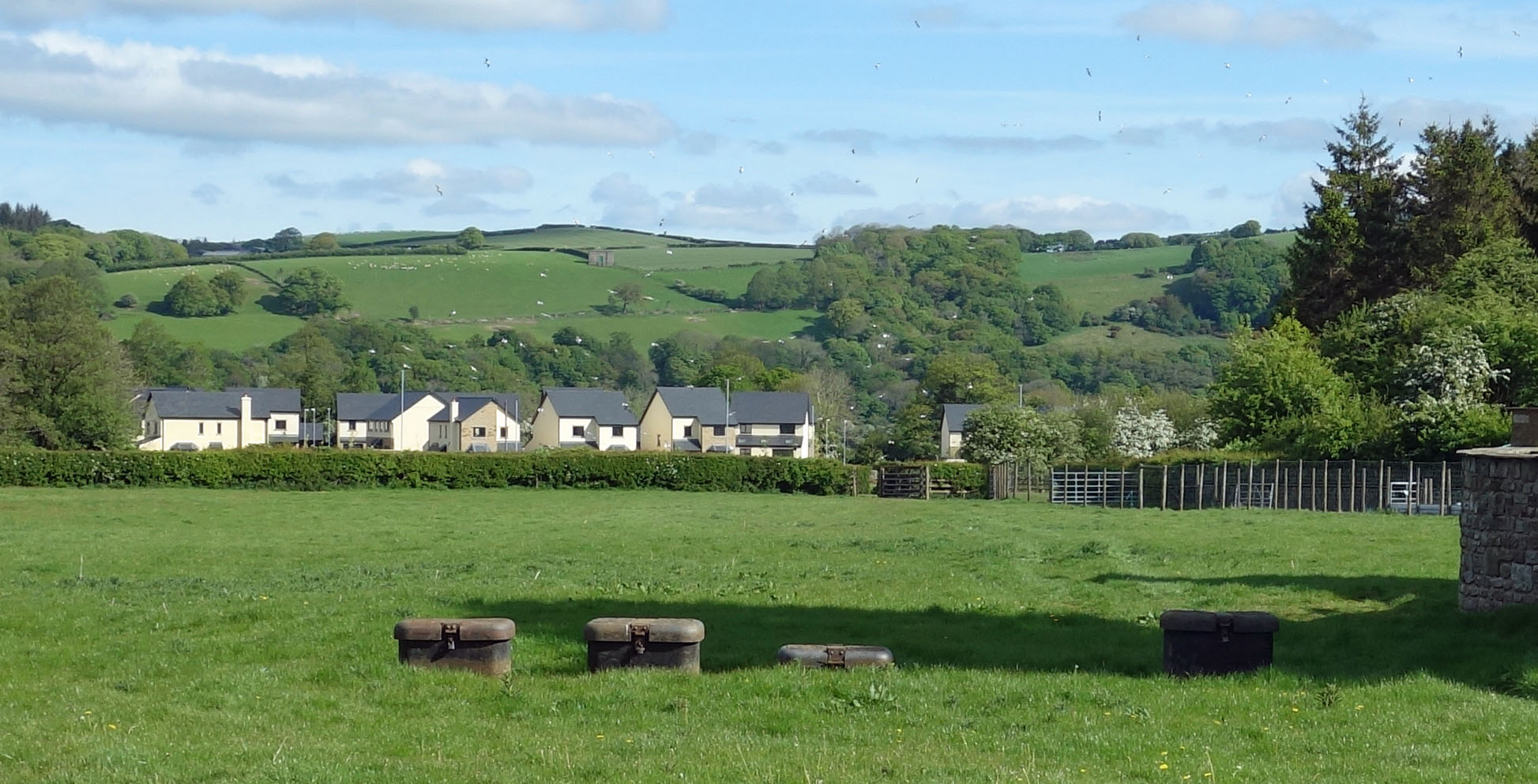 We returned to the old railway line to meet up with the line of the aqueduct near Ellers Farm. Here the aqueduct passed under the railway line by means of a bridge, now overgrown. It continues under an otherwise inexplicable gap through the new houses. Two of our distinctive gates can be seen by the A683, with another two across the fields (one open when we looked). We walked south by Artle Beck (through houses as the footpath is still closed) and then east on Brookhouse Road, where there is a gate to be seen on both sides of the road.

In the field by Artle Beck north of Brookhouse Road there are four square objects (shown left - note the gap through the new houses). These are air valves for the aqueduct. At every summit along the pipeline, and on long level stretches, a valve must be placed to allow the escape of air. Accumulations of air in the pipe would cause an enormous diminution in the quantity of water delivered. But why are there four of them if the four pipes across the Lune are consolidated into one pipe underground, as suggested above?

After 1892, because Manchester and other cities of the north-west were increasingly thirsty, three further pipes were laid, presumably adjacent to the first one, between 1904 and 1927. No doubt, thereÆs one valve per pipe. As can be seen, one of the valves is a little apart from the other three. My guess is that the three further pipes were laid together in a wider channel than the first one. They may not have been all turned on at once but laid in anticipation of future need. But what about the Waterworks Bridge ¢ and especially the tunnels? Were they designed from the beginning to carry four pipes? I can see no evidence that the Waterworks Bridge was later widened, so I think it must have been.

We walked through the Hawthorn Close ginnel to reach the footpath to Forge Mill, finding another gate in the hedge to the right, with a further gate in the hedge to the north, with more valves, one of them quite far apart from the others. From Forge Mill we took the footpath east to cross the aqueduct again, just west of Stauvins Farm. We know what to look for now ¢ we saw three more gates (making fourteen in all) and two more sets of valves, one by the fence to the north and the other near the Artle Dale wood (making four in all). The photo right shows the valves and gate to the north with a distant view of the valve house on the north bank of the Lune. We said goodbye to the aqueduct here as it continued across Artle Beck, heading for Intack House, Birk Bank, and so on. We thus felt satisfied that we had tracked the path of probably the largest engineering works carried out within the region.

So why was the aqueduct taken over the Lune and not under it? It could, of course, be a simple matter of cost. However, I notice that to the south the aqueduct goes under Artle Beck (where a bridge would be seen by nobody) but has a flamboyant bridge over Ottergear Clough (which is on a footpath). The Waterworks Bridge is clearly not just a functional one. It is quite ornate and shows the Manchester coat-of-arms (now painted grey). The bridge reflects Manchester's desire to display its civic pride and wealth.


&nbsp90.   ōOne Form of Exercise ¢ such as Walkingö to the River
&nbsp88.   The Lune Millennium Park Artworks
A list of all Saunterings so far