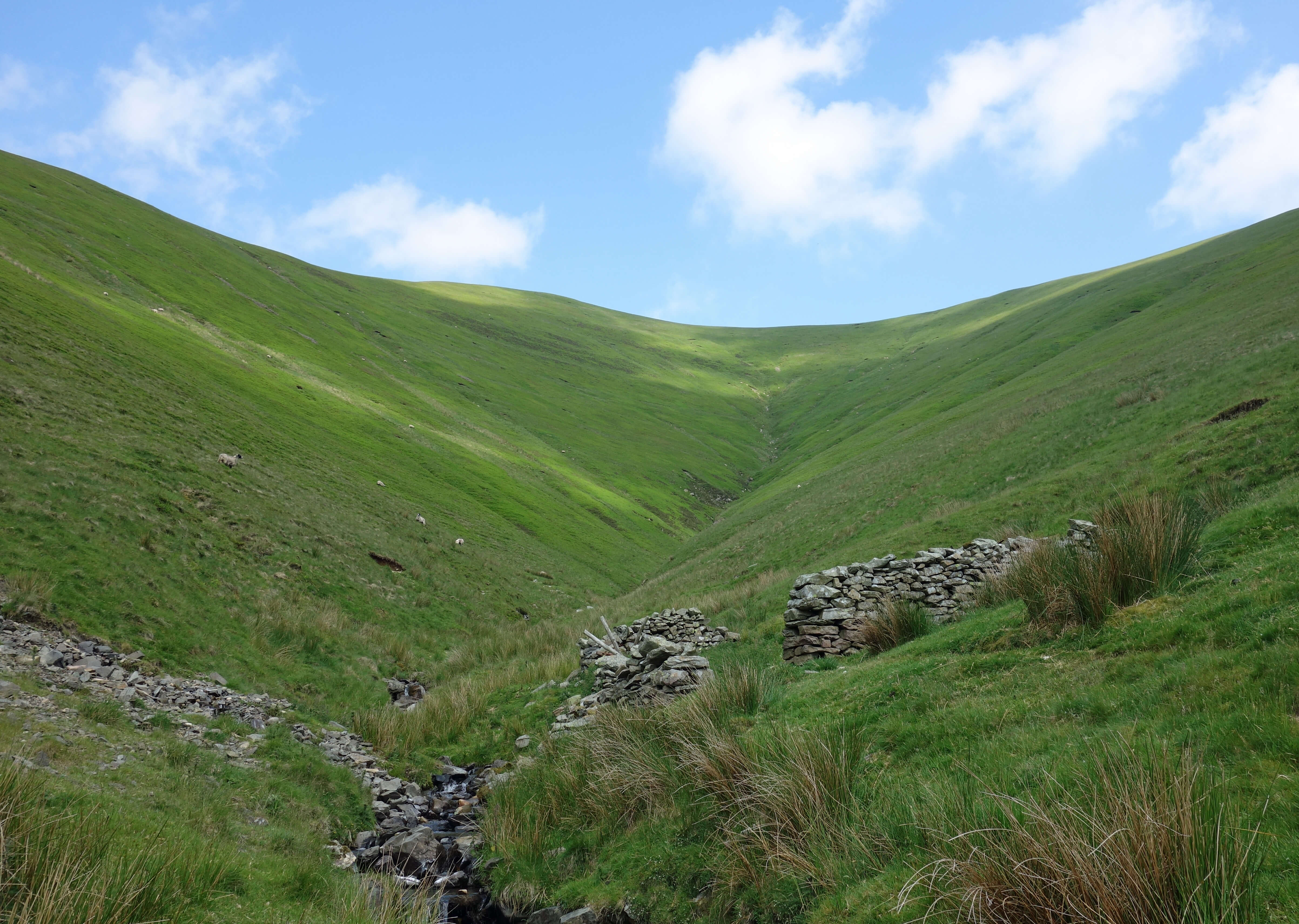 Do the Howgill Fells form the largest area in England with no walls, no hedges and no fences? There is a wall around the periphery of the 25 square miles of open access land, separating farmland from the rough grasses of the fells, and on the northern slopes there are a few walled islands of farmland, but there are no walls in the whole area of the Howgills above about 300 metres. There are no hedges either. However, the answer to my question is ‘no’ because there is one fence, which I’ll return to in a minute.

Why are there no walls on the Howgills, when they are such a distinctive feature of the Lake District and the rest of the Yorkshire Dales? There are few stones on the Howgills with which to make walls. The only significant areas of exposed rock are at Cautley Crag and Black Force. The rest is steeply rolling grassland, with some heather and bracken. This is because the Howgills are mainly of very hard Silurian Coniston Grit, different to the Carboniferous rocks of most of the Yorkshire Dales and to the Ordovician volcanic rocks of the central Lake District.

There are no walls because nobody has felt the need to build them. Nobody needed to clear rocks from fields for cultivation or any other purpose, as nobody ever had much purpose for the Howgills. Nobody ever lived high on the Howgills. There has been no mining or quarrying. In short, nobody needed to establish ownership, which is a prime function of a wall, of a patch of the Howgills. Most stone walls in the Lakes and Dales were built in response to the Enclosure Acts of the 18th and 19th centuries but those Acts seem not to have had much relevance for the Howgills. The second main function of a wall is to limit the movement of animals – to keep farm ones in and wild ones out. Today the only farm animals on the Howgills are sheep and fell ponies, and they can wander at will within the periphery fences. There are no wild animals on the Howgills to worry about.

The one fence that is on the Howgills encloses about fifty hectares around Hobdale Gill, south of Calders. Thousands of people walk past this fence every year on their way to The Calf but how many wonder what this fence is for? I hadn’t thought about it before now. Is it to keep something out or to keep something in? Is the enclosed area dangerous or contaminated? Is some scientific study being carried out? Is there some valuable resource within that people and animals must not spoil? Is there some stock that must not be allowed to wander?

I walked up Hobdale Beck to investigate. I came upon a weir that served no obvious purpose but at least indicated that somebody once cared about this beck. I reached the fence and found the gate by Hobdale Gill flat on the ground. So the fence is no longer fully functional. There were only a few sheep inside the fenced area. The enclosed area was clearly less munched than the open fell because it had a deeper shade of green, thanks to a profuse growth of bilberries. Despite the fence, the enclosed area is marked as open access, so I wandered in. A small rectangular structure marked on the map turned out to be derelict (as shown top right). Whatever function it had was no longer apparent.

I became aware of someone high on the fell opposite, below the path to Calders, moving about in a puzzling manner and glinting every so often. So, as is my wont, I scrambled up to Rowantree Grains (no rowans now or any other tree) to find out what he (for it was a he) was up to. I don’t think he minded. I was probably his only company all day, for I saw no walkers anywhere. It turned out that he was an employee of Natural England carrying out a survey prior to the possible planting of trees around Hobdale Gill. He was chuffed to have found a bilberry bumblebee. They are rare and quite distinctive, he said. He had however also found that the soil was shallow, perhaps too shallow for trees. He couldn’t get his spade in before hitting rock. Still, it was good to see that the modern scientist is au fait with the latest technology (the spade), although it was so glinty I suspect that he only bought it yesterday.

I asked him why the area was fenced but he had no idea. I left him to his survey and walked on to The Calf (676m). The Lake District peaks could be seen in a grey silhouette that made only a few distinctive outlines identifiable. The nearby little tarn had dried out.

The track to The Calf (on the horizon) from Calders

I walked over to Red Gill Beck to see the Andy Goldsworthy sheepfold that others have enthused about. It added nothing for me but at least it got me into a secluded dale where I could watch the art of a kestrel cavorting over the hillside.

I returned to the fence. So far it had looked to be in good nick but as I walked down to Middle Tongue, entranced by Ingleborough ahead and Pen-y-ghent, with a similar profile, to its left, I realised that parts of the fence were missing, with the wooden posts that had replaced the metal ones having rotted. I began to accept that I won’t need to worry about the fence for much longer but then came across rolls of wire netting and new posts sunk into the ground. So somebody is concerned to keep this fence functional.

But I still had no idea why. I had seen nothing to support any of my provisional thoughts. My guess, for what it’s worth, is that it has something to do with Sedbergh’s water supply. We’re now on at least the third generation of fencing, so the original fence was at least 50 or 60 years ago. At that time water authorities were more concerned about the purity of water supplies, as they did not have modern purification plants. I had not noticed a water inlet near that derelict shed but perhaps there was too little water for it to be functioning anyway. However I did notice a track that sliced the midriff of the opposite slope of Sickers Fell. It was much too level and precise to be a walker’s track and anyway led nowhere but to the fenced-off area. Perhaps it’s the line of a pipe. If so, perhaps it’s still functioning. If so, perhaps the good people of Sedbergh are unaware that trees may soon drink their water.


&nbsp16.   The Wildflowers of Sulber
&nbsp14.   Logging Along the Cam High Road
A list of all Saunterings so far