101. &nbspPassing the Time at Heysham 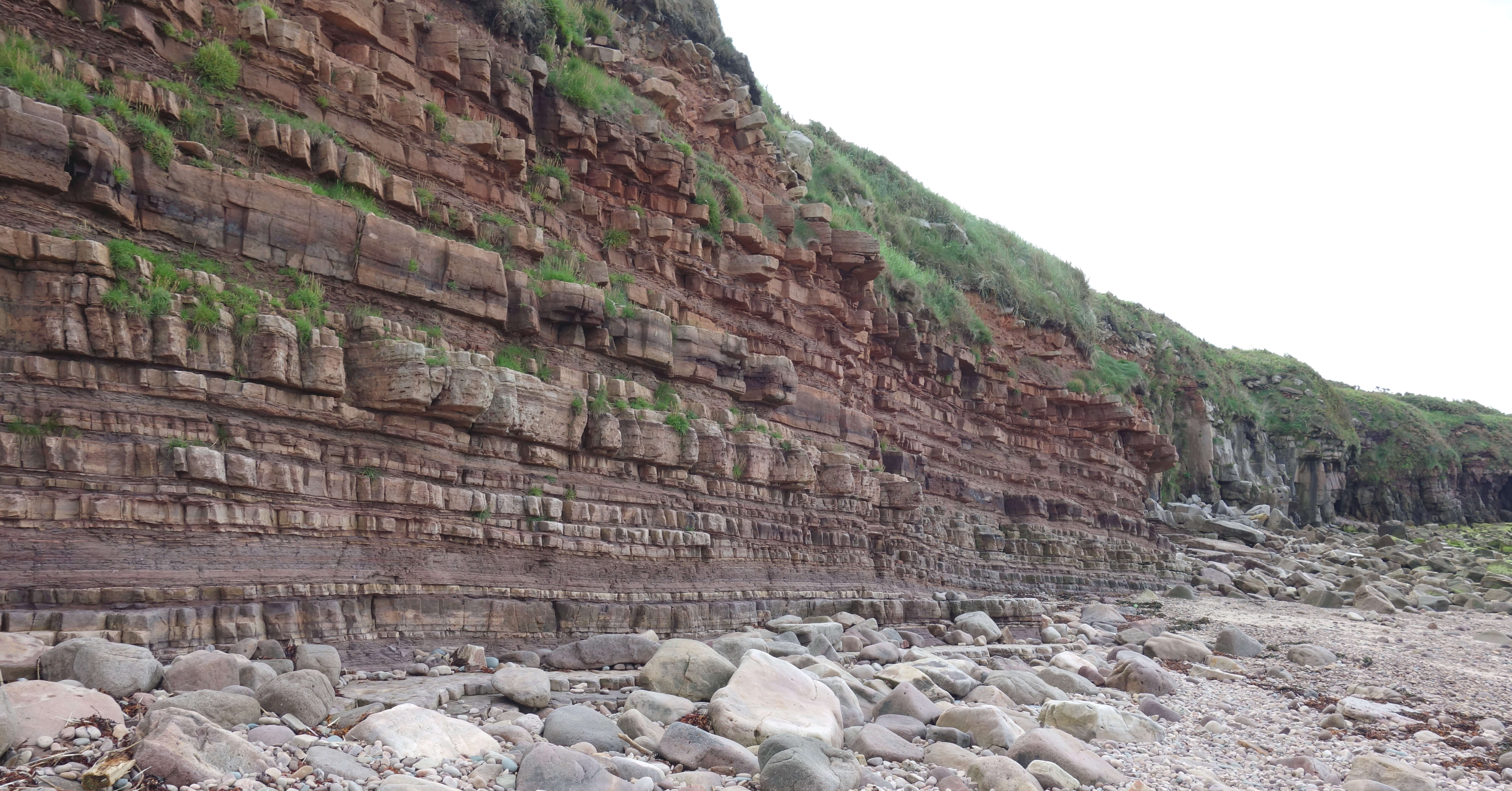 It is necessary to keep track of time when walking about Heysham. The elements of Heysham’s long history should be appreciated within their temporal context. I walked first to Half Moon Bay in order to try to visualise the region before man interfered. The bay is backed by a cliff face with clear sandstone strata to tell us that this bedrock was laid down many millennia ago. When the Ice Age ended some 12,000 years ago this promontory of Heysham Head was left almost as an island, with the Irish Sea to the west and low-lying marshland to the north, east and south.

The cliffs are modest and Heysham Head is only about 40 metres high but even so they must have formed a prominent landmark for travellers up the Lancashire coast at a time when people travelling long distances tended to do so by boat rather than on foot (and when, of course, the artificial promontory of Heysham port and power station wasn’t there). I don’t think that there are any similar cliffs or anywhere higher on the Lancashire coast south of here.

I scrambled up from the bay onto the gorse-scrubby land known as The Barrows. A barrow is an earthen grave mound and therefore it is no surprise that excavations have found many artefacts that suggest that this was an ancient burial ground. The dating of some of these finds to the Mesolithic period of about 10,000 years ago shows that the first colonisers of the region after the ice melted considered this to be a prime location, as no doubt it was since its isolation provided safety and the sea and marshland yielded a plentiful supply of fish and wildfowl, topped up with the occasional elk or mammoth, perhaps.

For centuries communities lived upon this headland – and died, as shown by the burial ground on The Barrows and more spectacularly by the famous rock graves. These are unique in England and although they are difficult to date they are probably pre-Conquest. Today we can only speculate on their precise use but clearly it took considerable effort to create these eight graves (six together and a further two a little to the north) and they must therefore have been for people revered within the community. A young man sat on the graves, tapping on his mobile.

With all these graves, and with the views across the bay to the Lake District hills provoking awe and serenity, we can understand that these people would have developed a sense of spirituality. How that manifested itself in the early centuries I don’t know but no doubt more formalised forms of worship gradually developed. Near the rock graves are the ruins of St Patrick’s Chapel, dated to the 8th or 9th century. Excavations around the chapel recovered bone fragments of about sixty individuals, dated to about 1000. Whether the site of the chapel had any direct association with St Patrick (of the 5th century) is a matter of debate but regardless of that the remains are impressive for being a rare example of a pre-Conquest church in England. Families took photos of themselves feigning surprise through the Saxon arched doorway.

The ruins of St Patrick's Chapel

The chapel is rather small and it is assumed that congregations often assembled outside. Even for our hardy predecessors this may not have been ideal, since the location is exposed to the westerly gales. Just a short distance down the hill is St Peter’s Church, a more substantial but still modest structure, dating from the 14th century with a pre-Conquest nave and believed to be on the site of an earlier church. It has, of course, had minor renovations over the years but it retains its peacefulness, as can be appreciated by pausing among the graves on the slope down to the bay to share their view across the water.

The earliest surviving homes of the church-goers are to be found near the church in Lower Heysham, where some of the cottages bear 17th century dates. The adjective most often applied to Lower Heysham is ‘quaint’, which seems a little patronising to me. It was, no doubt, a tight-knit, isolated community making a rough living from fishing and cockling around the rocky cove. The cottages remain, small and higgledy-piggledy, gathered about the Main Street, but there are no boats here now. I sat on the small jetty watching the tide pulsing in, gradually covering the rocks, until it was within a few metres of the jetty.

The fact that this is called Lower Heysham tells us that there is, or was, a Higher Heysham too. Higher Heysham is half a mile to the south-east and was, old maps indicate, rather separate from Lower Heysham. There isn’t much left of old Higher Heysham now apart from the Old Hall whose sign says that it was built in “about 1598”. It is now an inn. The space between and around Lower and Higher Heysham has been in-filled with suburban housing. In the past Heysham has had a holiday camp, a pleasure park, a go-kart track, and a bird zoo but today it seems to have given up on explicit tourist attractions. Its attraction now is itself – its old streets, cottages, chapel and church, and the headland and its views. Tourism here, then, mainly involves grey-haired folk ambling along Main Street, which, they will be pleased to discover, must be one of the shortest Main Streets in the country.

I walked back to the promenade that continues to Morecambe. There are still green fields with horses but above them the suburban houses that have engulfed Heysham continue beside the A589 to join Heysham with Morecambe. Houses were built alongside the road in the 1930s and in subsequent decades over large areas behind them. I sat for a while looking across the bay, now full to the brim, towards Barrow-in-Furness, Black Combe and the central Lakeland hills, under cloud, and then back towards the Heysham Head promontory.

Heysham has a long history and now seems at ease with itself. But what of the future? I have tried to ignore the power station but Heysham’s future must be partly tied to that of the power station. I believe that the two reactors are due to operate until 2024 and 2030 and although the government said in 2010 that Heysham was one of the sites to be considered for future nuclear power stations there has not been any commitment, as far as I am aware. Maybe Heysham’s future prosperity will depend more on the adjacent port, now that its trade should be boosted by the new dual carriageway linking to the M6. However, I am always surprised that large ships such as the Isle of Man ferry can find a way across the shallow Morecambe Bay, so I’m not sure how much scope for further trade there is.

Time was up. I had whiled away enough time on this amble around Heysham. The car service should be finished.


&nbsp102.   Upper Ribblesdale: Drumlins, Three Peaks and a Cave
&nbsp100.   Crookdale and Horseshoes
A list of all Saunterings so far