According to the Moorland Association, heather moorland is ôrarer than rain-forestö and ôaround 75% of Europeĺs upland heather moorland is found in the UKö. Therefore, it concludes, it is important to ôprotect and preserve the moorsö by continuing the management without which ôthe precious land would revert to scrub and forest and the heather moors lost foreverö. The conclusion seems ungrammatical ľ but, more importantly, is it sound (assuming, for the sake of argument, that the premises are true)?

We set out from Grizedale Bridge to walk across the heather moorland of Hayshaw Fell, Catshaw Fell, Hawthornthwaite Fell and Fellside Fell. Grizedale Bridge is over Grizedale Brook, which arises a couple of miles to the east at Grizedale Head and flows below Grizedale Fell, under the bridge, through Grizedale Reservoir and along Grize Dale to join the Wyre near Garstang. If that isnĺt enough Grizedales for you, there are plenty more (and lots of Grisedales and even a Grisdale) in North-West England, the Ĺgrizeĺ or Ĺgriseĺ being from the Old Norse for Ĺpigĺ.

We soon met heather as we walked around Harrisend Fell and it accompanied us all the way for the three miles to the top of Hawthornthwaite Fell. It was not particularly difficult walking, with the heather being of variable height but never more than knee high and sometimes bone dry (the photo left, looking back along the fence in the direction of Blackpool, shows, on the two sides of the fence, the heather in its two extreme states). The heather's white and purple flowers were rather sparse but enlightened occasionally by the brighter bell heather. Overall, though, the moor was sombre, as the promised blue skies had not fully materialised, with the dark heather covering the whole expanse of the Bleasdale Moors.

The wire fence went on and on to the top of the fell and so did we. With no variety in our surroundings my mind wandered. I thought of the botanist Richard Salisbury (1761-1829) who first recognised the unique nature of common heather (or ling). The heather family (Ericaceae) has over 4,000 species within over 100 genera, including rhododendron, blueberry and various heaths and heathers. Salisbury placed the common heather in a genus all of its own Calluna (from the Greek for a besom, which heather used to be made into) when he noticed that the corolla and calyx are in four parts instead of the five for the rest of Ericaceae.

Salisbury was a Yorkshireman and a difficult character (Iĺm saying nothing). He was born Richard Markham and changed his name in order to inherit from a relative of his grandmother. He suffered a series of financial difficulties and once spent time in a debtorĺs prison in order to escape claims from his wifeĺs family. He moved from Yorkshire after acquiring a private botanic garden in London and became instrumental in establishing the Horticultural Society (now the Royal Horticultural Society). He became its first secretary in 1809 but he was soon forced to give up the role, with the Societyĺs accounts in disarray.

Unlike most of his fellow botanists, he did not accept the Linnean system, the taxonomy for biological classification set up by Carl Linneaus in 1735. Salisbury preferred a Ĺnatural systemĺ. He was further ostracised by the botanic community for plagiarising another botanist, Robert Brown, who later became president of the Linnean Society and after whom ĹBrownian motionĺ is named. Brown commented that Salisbury ôstands between a rogue and a foolö. Well, he cannot have been a complete fool, as he did at least spot that the corolla and calyx of common heather are in four parts. However, he never saw a heather moorland like the one we were walking over. 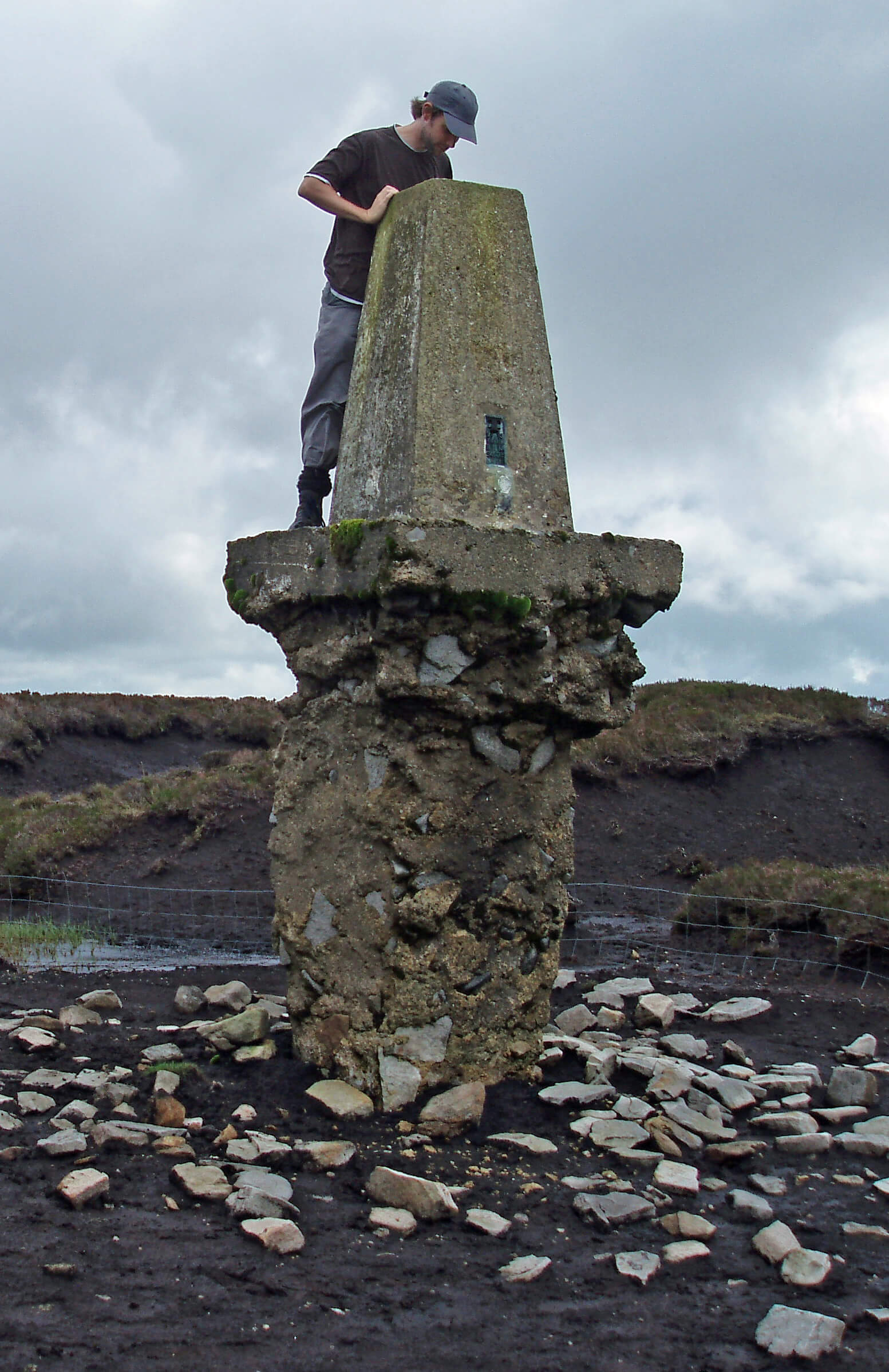 We eventually reached the top of Hawthornthwaite Fell (478 metres) to find the trig point horizontal in the peat. In 2008 the trig point had been upright (shown right) but standing like a tooth whose gum had rotted away to expose the root. The fact that the trig point has since fallen is only of mild interest. The question is: Why? Why has two or three metres of peat disappeared in the century or so since the trig point was installed?

As always, I donĺt know but I am prepared to speculate. Peat forms from vegetation dying, decaying, and being compressed into the soil, to grow millimetre by millimetre over the centuries. The Pennine hills have layers of peat that may be several metres deep. Clearly, this process has been abruptly reversed here recently. In the southern Pennines industrialisation has killed off vegetation, leading to erosion, but that it is unlikely to be the explanation here, with the hills being in a rural part of Lancashire. The erosion cannot be blamed on walkers either, because walkers were not allowed here until the Countryside and Rights of Way Act of 2000. 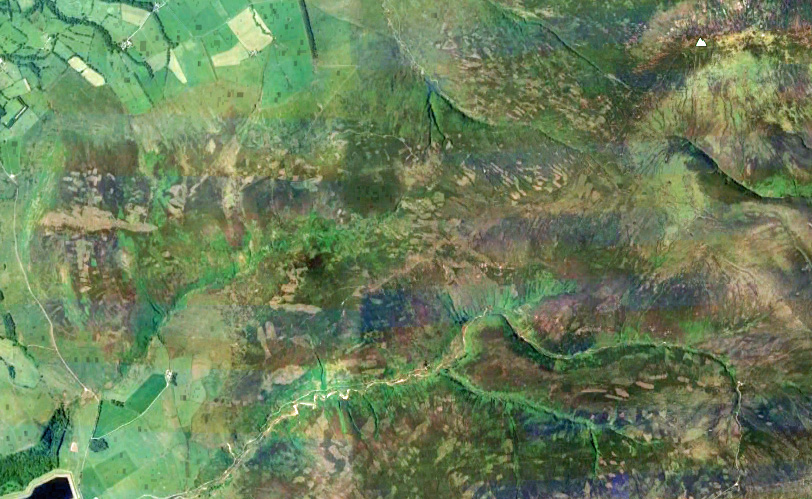 A major change in the last century or two has been that these moors have been rigorously managed. The core part of that management is the practice of rotational burning whereby patches of heather are burned in a roughly ten-year cycle so that there are always young green shoots for grouse to eat. This burning obviously reduces vegetation and exposes the soil. In wet weather the soil will be more liable to be washed away, since it is less protected and there is less vegetation to absorb the water. In hot weather the soil will be more liable to dry out, become dusty and be blown away in a wind. And once erosion is underway there may be little to stop it.

The effects of this burning are scarcely noticeable at ground level, by a walker, other than in the variability of the heather. To appreciate the effect and extent of the burning it helps to look at the Google Earth views of the hills. The image to the left shows the moor that we walked over, from bottom left to top right. If you use Google Earth to view the range of north Pennine hills you will find that a great many of them show the distinctive signs of rotational burning, despite being within National Parks, Areas of Outstanding Natural Beauty and Sites of Special Scientific Interest. The whole area that we walked over, and for miles around, is a patchwork of recently burned heather.

The practice of rotational burning is controversial, for many reasons, but I donĺt want to engage with the controversy now: I want merely to point out that so-called heather moorland is clearly not a natural environment. At least, it is rather less so than, say, a golf-course, which is maintained without such destructive practices. In fact, the aerial view of managed moorland looks much like a huge golf-course, but with more variations than its green, fairway and rough.

From the top we walked west across Hawthornthwaite Fell and Fellside Fell. There had been a rough path beside the fence along the ridge top but there was no path here. It was a tiring struggle but we had views across Morecambe Bay to see Lake District rain clouds drifting our way but never quite making it. We passed various peat hags, wondering how they came to be in the condition theyĺre in. We noticed young rhododendron and fir trees (which the sheep wonĺt eat) and also a small silver birch (which the sheep hadnĺt noticed yet) taking hold, perhaps indicating how these moors might change if they were no longer managed. We also saw a raptor which wasnĺt of a species that we can normally identify. Perhaps it was a hen harrier? At long last, we were glad to reach the shootersĺ track by Catshaw Greave. Shootersĺ tracks do have their uses.

Looking back to Hawthornthwaite Fell. (According to the Moorland Association, heather moorlands are "treasured by millions of walkers and wildlife enthusiasts". If that is the case then most of them treasure the moorlands as shown here - at a distance. We saw nobody anywhere on the moors all day.)

So, to return to the original question: must we preserve our heather moorlands? Imagine that in the 19th century some landowners had decided that large cypress hedges were a good idea to provide privacy (some did) and that the practice caught on so much that we now had many square miles of tall, dense cypress forests ľ in fact, over 75% of the worldĺs such forests, forming a habitat rarer than rain-forest. Would we feel obliged to preserve them? Of course not. They would be unnatural ecological deserts. As are our heather moorlands.


&nbsp100.   Crookdale and Horseshoes
&nbsp98.   Karren and Flora on Hutton Roof Crags
A list of all Saunterings so far