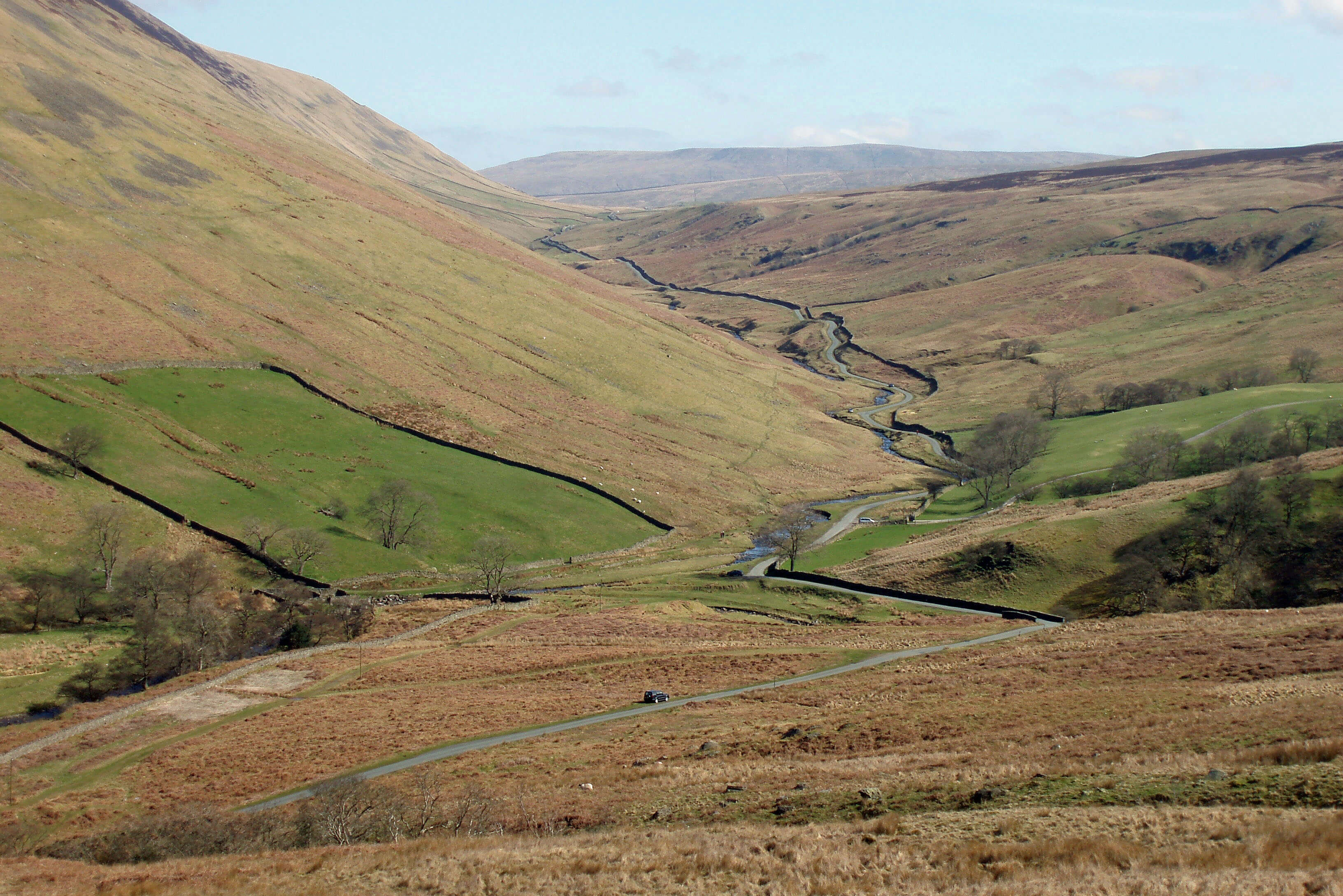 Barbondale became part of the Yorkshire Dales National Park in 2016, which is fair enough since it is a scenic valley. It is also one of the few dales to have two different sides to it – a west side of grey Silurian slate and an east side of less grey Carboniferous limestone (the photo shows Barbondale on an earlier, sunnier occasion). I aimed on this walk to investigate the transition between the two.

I walked first on the path below Barbon Manor. This is one of the most well-known and pleasant strolls in the region, through woodland and accompanied by a burbling Barbon Beck. The path was more open than on my last visit because of all the recent tree-felling but it was still not open enough to enable a view of Barbon Manor. The manor was built in 1863 as a shooting lodge for Sir James Kay-Shuttleworth, who had married into the Shuttleworth family, owners of the Barbon estate since 1588.

I don’t want to give the impression of being obsessed by the shooting industry but anyone who visits areas of north-west England more or less at random, like me, is bound to find that much of the land is being or has been used for game-shooting. So let us reflect upon Sir James and his shooting lodge. Dr Kay became known for his influential document The Moral and Physical Condition of the Working Class Employed in the Cotton Manufacture in Manchester written in 1832. After acquiring his fortune he naturally wondered how best to use it. It appears that he thought it better not to help alleviate the conditions of the working class, with which he was so familiar, but instead to build a grand mansion in the French Renaissance style so that he and his friends could kill birds. Most of the upper-class, then and now, would agree with his judgment.

I cannot relate to this frame of mind. If I had a fortune then I wouldn’t think of killing birds with it. I will never kill a bird for fun: I don’t see how there can be any fun in it. It is worrying that our nature and environment are in the hands of those with such a warped attitude towards life. We seem to have inherited a strange respect for hunters and shooters. Even Gilbert White (1720-1793), regarded as England’s first ecologist after his detailed studies of the nature around him in Selborne, wrote as if in awe of hunters, regarding the practice of hunting as an essential rite of passage towards manhood: “Most men are sportsmen by constitution; and there is such an inherent spirit for hunting in human nature, as scarce any inhibitions can restrain ... Unless he was a hunter ... no young person was allowed to be possessed of manhood or gallantry”. Women were not considered.

That hunting/shooting is a sport is one of many myths. I have on my shelf an Encyclopedia of Sport published in 1959. The 28th of 66 chapters is entitled ‘Game Shooting’. It includes details of ‘record bags’ for various species as though they are on a par with record cricket scores. It says, for example, that 3,937 pheasant were shot at Beaconsfield on December 18th 1913 by H.M. King George V, The Prince of Wales, Lord Charles Fitzmaurice, Lord Ilchester, Lord Dalhousie, Lord Herbert Vane-Tempest and the Hon. H. Stonor. It is easy to skim over a number like 3,937 – but pause. That is 562 pheasants per shooter, which at a rate of one pheasant per minute would be over nine hours of remorseless killing. I see also that 69 capercaillie – now rare in Scotland – were shot at Dunkeld on November 4th 1910 by the Duke of Atholl, the Marquis of Tullibardine, Lord George Murray, Col. Ruggles Brise, Count Clary, Capt. Moray and Capt. Wentworth. I think Agatha Christie borrowed some of those names. Of course, it wasn’t just birds that were shot – the record for rabbits was 6,943 and for hares 1,215. Notice the precision with which these numbers were recorded. It clearly mattered to the shooters how many they shot.

The remarkable thing about this game-shooting chapter – apart from the fact that it appeared in a book about sport – is that even in 1959 the opportunity was being taken to perpetuate other myths that the shooting industry still peddle today:
•   that “the size of the bag was a matter of major importance” and, as implied by the past tense, no longer is – but gamekeepers consider it their job to maximise the number of birds available to be shot;
•   that “the accent now is … on conservation” – but only of game birds, not of anything that gets in the way of game birds;
•   that shooting “is no longer the perquisite of the wealthy” – but I once had the misfortune to attend an auction at which I was astonished to find that the bidding for a day’s grouse shooting rose to over Ł1000;
•   that, as implied by “the value of their sport is to be measured not by the amount of game hanging in the larder”, all shot game birds are eaten – but 50 million game birds are reared and released to be shot every year: who eats them all, or do they end up here?

Nowadays, although the shooting industry is adept at glossing its image, progress is being made debunking these myths. I doubt that game-shooting would appear in a modern encyclopedia of sport. The SportAccord definition of sport specifically rules out any activity that is in any way harmful to any living creature. But I may have been unfair on Kay-Shuttleworth, in taking the word of others that he built Barbon Manor as a shooting lodge. On the other hand, the Barbon Manor estate is, I read, a “fabulous partridge and pheasant shoot” today. I walked on, disturbing a few pheasants, one of which was albino. I don’t fancy its chances.

I reached the footbridge over Barbon Beck, with a watery sun at last appearing above Barbon Low Moor, and realised that a continuing cold/cough had left me drained. I aborted the original aim to walk up to Bullpot, Brownthwaite and then to Barbon and instead walked slowly back on the road. I passed another Goldsworthy sheepfold. I am sure that an artist prefers that their artwork provokes a response in a viewer rather than indifference – in which case, I can only say, that in the mood that I was in, the sheepfold provoked only irritation. Barbondale does not need such so-called artwork. I regret that Cumbria County Council paid Goldsworthy to litter our region with such structures. To me, they seem to lack style and subtlety, but what do I know?

Neglected old sheepfolds, which I prefer to come across, eventually disintegrate. It would be a form of participatory art – which I am sure Goldsworthy approves of – if we all hurried along the process of disintegration of these artificial sheepfolds. Reaching the village of Barbon, I entered the church to pay penance for such a short walk. I understand that stained glass windows were not installed in the east wall because they could not possibly improve upon the view of the fells through plain windows. That’s more the spirit! However, for us to agree, the church will need to employ a window cleaner. 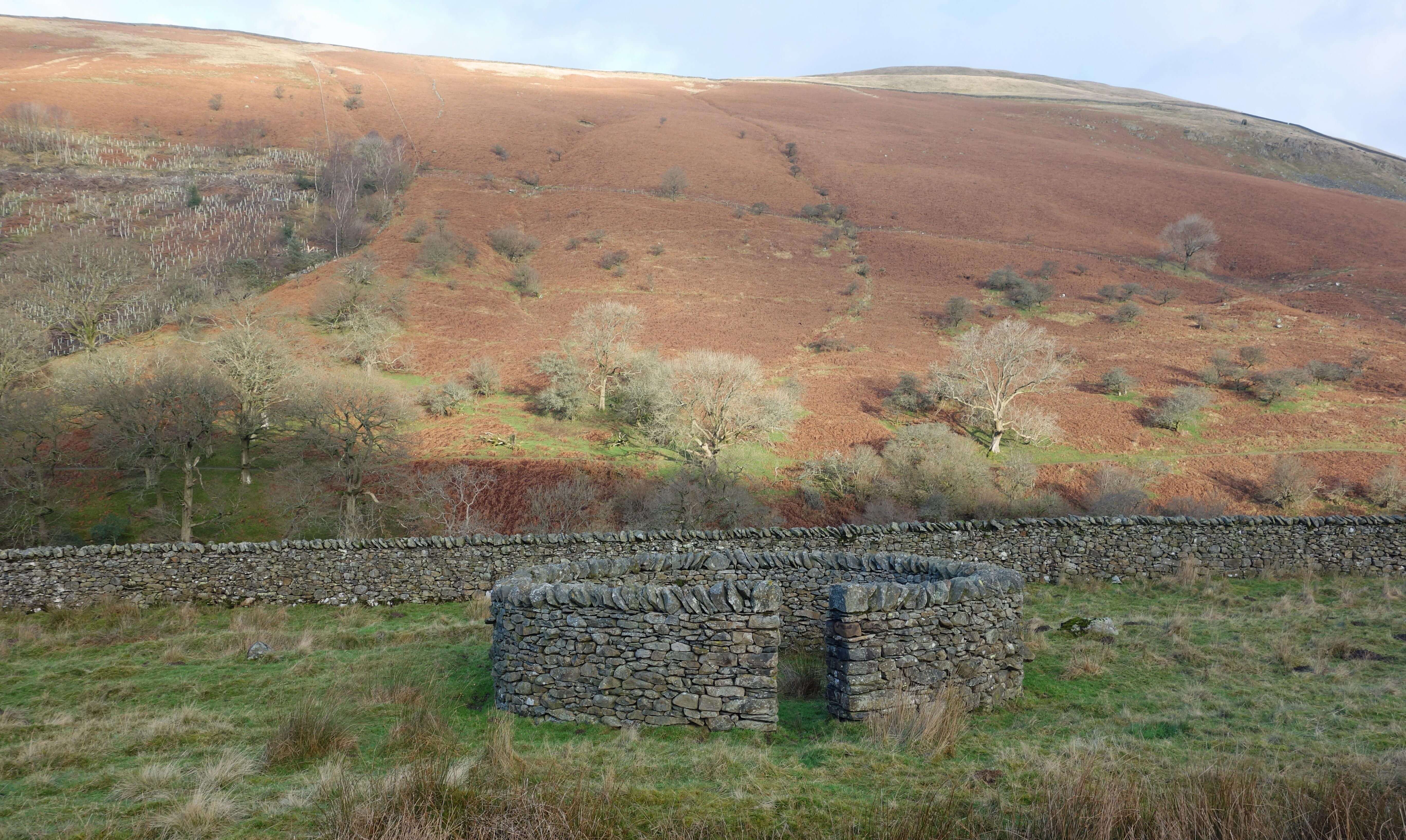 The Goldsworthy sheepfold in Barbondale (does the former really add to the latter?)


&nbsp72.   Turner and the Lune Aqueduct
&nbsp70.   Up the Conder
A list of all Saunterings so far