7. &nbspCastling in Cumbria: From Brougham to Lowther

According to Wikipedia’s list of castles in England, Cumbria has more castles than any other English county, 63 in fact. I went to see four of them on this saunter: Brougham Castle, Lowther Castle, Clifton Hall and Brougham Hall.

A definition of ‘castle’ would be helpful. Unfortunately there isn’t a precise one because the concept just developed over the centuries. The Wikipedia list is of medieval fortifications, although there are, of course, older constructions that are called castles, such as the Iron Age Maiden Castle in Dorset and the Roman Burgh Castle in Norfolk. Most Roman forts, such as Brocavum, next to Brougham Castle, are not normally considered to be castles. Brougham Castle itself, founded in the early 13th century, certainly qualifies and indeed serves well as a prototypical English castle.

I did not dally at Brougham Castle, as I had visited it before, but viewed it from across the River Eamont, as I walked west by the riverside. The Eamont flows from Ullswater to meet the River Lowther at Brougham Castle on its way to join the River Eden. Sometimes it flows too fulsomely and is unable to pass under the fine 15th century Eamont Bridge, causing flooding of nearby houses. At other times the bridge's narrowness means that traffic is unable to flow smoothly over it. When the A6 was the main road north it was a notorious bottleneck. Only its antiquity has saved it from replacement.

At the M6 I turned south to have a look at the two Neolithic henges, Mayburgh Henge and King Arthur's Round Table. I paused at the latter to read the information board but walked off when I read its first three words: “Despite it’s name”. I never found out who Neolithic Arthur was. On reflection, I accepted that even people employed by English Heritage to produce information boards may make a slip. Its unlikely that there are none in this document.

Earl Henry’s Drive on the west bank of the River Lowther was a three mile plod. I tried to imagine this drive without the ever-present noise from the adjacent M6, without London-Glasgow trains rattling by, and without the large holiday park. Then the owners of the Lowther Estate would have had this long, leisurely, quiet, impressive entrance to their abode. By the time I emerged from the wood into the parkland, I felt that it was absurdly over-the-top to flaunt one’s wealth in this way when the majority of the population was so poor. I suppose the wealthy do much the same today.

I was not in the mood to appreciate Lowther Castle when at last I reached it. It is an odd building. Its walls look new and yet the building is a ruin, in the sense that roofs and windows are missing. It looks more like part of a film set than a real castle. Is it, in fact, a castle? It was built from 1806, which is hardly medieval. It was, no doubt, built on the site of earlier mansions but, as far as I know, they were not castles from which the title may be inherited. It cannot be reasonably described as fortified either. It did not need to be fortified in the 19th century. The turrets and so on are just embellishments that look like fortifications. But I suppose ‘fortified’ is an elastic concept. Even my own house is designed to keep intruders out. Overall, I’d say that Lowther Castle is a folie de grandeur, if not a folly.

Walking back on the east side of the Lowther and crossing the M6, I arrived at Clifton Hall. Actually, I arrived at the squat tower house, which is all of the hall that remains. The information board (no slips this time) gave many details of its history but nowhere did it call Clifton Hall a castle. It was a 15th century manor house. 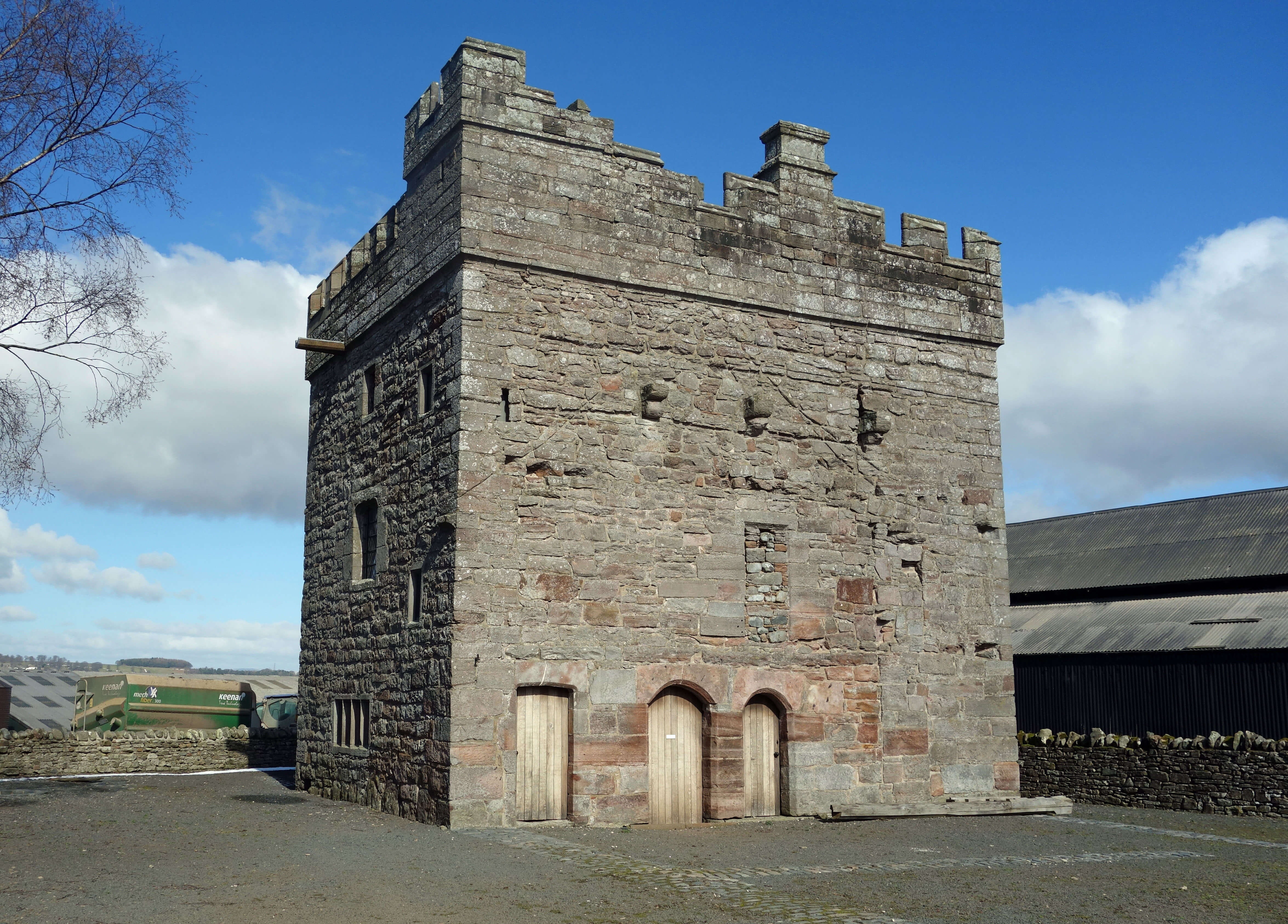 I continued to Brougham Hall. I was rather taken with it. Who wouldn’t like a place whose first door was labelled ‘Brougham Cupboard’? There has been a recent attempt to rescue the hall from dereliction and to develop it into a centre for local crafts. I saw an appeal to “any American or other kind-hearted visitor”. I am kind-hearted but I can only wish it well. But is it a castle? It describes itself as ‘the Windsor of the North’. Well, Windsor is a castle, so … but, no, Brougham Hall is not, and never has been, a castle, to my mind. It was a manor house, plus pele tower.

The history of the ownership of these four buildings is a convoluted tale of several illustrious dynasties of the north. Suffice to say that in medieval times several wealthy families lived cheek-by-jowl within the scope of my saunter, in what I had assumed to be a relative backwater. It couldn’t have been a haven of retreat for them either, with marauding Scotsmen just to the north. Perhaps this small region always had great strategic importance, as indicated by the other evidence passed on this walk – the ancient Henges and the Roman fort at Brougham. As I was well aware on this walk, the region has little strategic importance today as a gateway to and from the north because most people dash straight through it on the M6, the A6 or the London-Glasgow train.

As someone who resents the opulence of the few when the many were (and are) in poverty, I am pleased to read that the families’ centuries-long tenancies of these castles and halls ended in ignominy. Lowther Castle was abandoned in 1937 after the extravagance of the 5th Earl of Lonsdale squandered much of the family fortune. The 7th Earl at least had the sense to say that the castle “exemplified gross imperial decadence during a period of abject poverty” and began to have it demolished. He desisted after others appealed for mercy on its behalf. The present Earl of Lonsdale (the 8th) is in such penury that he now owns a mere 5,000 acres and has tried to sell Blencathra. Similarly, Brougham Hall was sold in 1934 by the 4th Baron Brougham and Vaux in order to pay off many debts, some incurred by gambling. The fortunes of the Wybergh family, who owned Clifton Hall, declined after Thomas Wybergh was on the losing side in the English Civil War (1642-1651) and after the hall was looted by the Bonnie Prince Charlie Jacobites of 1745, during the last-ever skirmish on English soil. The Clifford family of Brougham Castle continues – we are now up to the 27th Baron de Clifford (not to be confused with the 14th Baron Clifford of Chudleigh or a Clifford barony in abeyance (whatever that means) since 1858) – but it abandoned Brougham Castle after the death of the redoubtable Lady Anne Clifford in 1676. The locals re-used much of the castle’s stonework in nearby properties and I don’t blame them.

Despite what Wikipedia says, I consider that I saw only one castle on this walk. I won’t worry too much about the other 59 on its list.


&nbsp8.   What Price Catrigg Force?
&nbsp6.   The Count of Flasby Fell
A list of all Saunterings so far