I walked along the Hornby Road to see how the gulls are getting on. Gulls? Who cares about gulls – large, noisy, aggressive birds that pinch our seaside chips? I don’t particularly but the long and winding saga of the gulls on the Bowland hills is one of nefarious goings-on, hidden from the public eye, indicative of the complex relationships between government, landowners and environmental policy.

From Barkin Bridge I walked to the end of the surfaced road at High Salter. On the way I passed agitated oystercatchers, lapwings, skylarks, pied wagtails and swallows, no doubt concerned about their young, while a few gulls whirled above in the breeze, but not, I think, the species that nest high on the moor. The Hornby Road (also known as the Old Salt Road) is one of the best walking tracks in Lancashire – but one frequented by few walkers. That’s because the track runs ten miles or so over the watershed (leading eventually to Slaidburn, at the southern end, and to Hornby, at the northern end) and to walk the track end-to-end means making arrangements for transport at one or both ends. It isn’t easy to create a sensible circular walk by leaving the track for some rough fell-walking either. On this occasion I hoped to complete a d-shaped walk, that is, a walk south on the track, a loop off it to Wolfhole Crag, and a return north on the track.

The track provides wide vistas, ahead to the remote head of Roeburndale, to the right to the slopes of Mallowdale Pike, leading up to Ward's Stone, the highest point of Bowland, and to the left far across to the peaks of the Yorkshire Dales, on this occasion just grey shapes. The track becomes increasingly isolated, far from any habitation or modern road, and therefore utterly quiet, apart from the sound of birds, among which that of the curlew began to dominate. What an evocative sound it is! Further along, though, around High Salter Close, the gulls began to take over.

The gulls started breeding in numbers on the Bowland hills in the 1930s, after their coastal sites had been converted to golf courses, holiday homes, caravan parks, and so on. With plentiful food and an absence of predators (because they are eliminated by gamekeepers to protect the grouse), the gulls flourished on the moor. By the end of the 1970s over 25,000 pairs were nesting, forming the largest colony of lesser black-backed gulls in the world at that time. In 1978 a licence was granted (by the equivalent of today’s Natural England) to kill most of the gulls. Why?

The official reason for killing the gulls was that they were, through their excrement, considered to be polluting the water, which was collected for the inhabitants of Preston and elsewhere to drink. Over three years 50,000 gulls were killed and tens of thousands of clutches were destroyed. That reduced the number of nesting gulls to tolerable levels, as far as pollution was concerned – but the licence continued to be renewed, year-by-year. Why?

I walked on to Alderstone Bank, where large gritstone boulders lie about, and then dropped down, for a bit of walking on grass, to the ford on the shooters' track over the infant River Roeburn. As I walked on up the track, I heard my first grouse. In fact, I only saw four grouse (two of them chicks) on the whole walk. I began to wonder if the estate was giving up on grouse-shooting. The income must be negligible compared to the billions already owned – hardly worth the increasing opprobrium that the activity attracts. But then I saw that the old shooting cabin has been replaced by a new one. 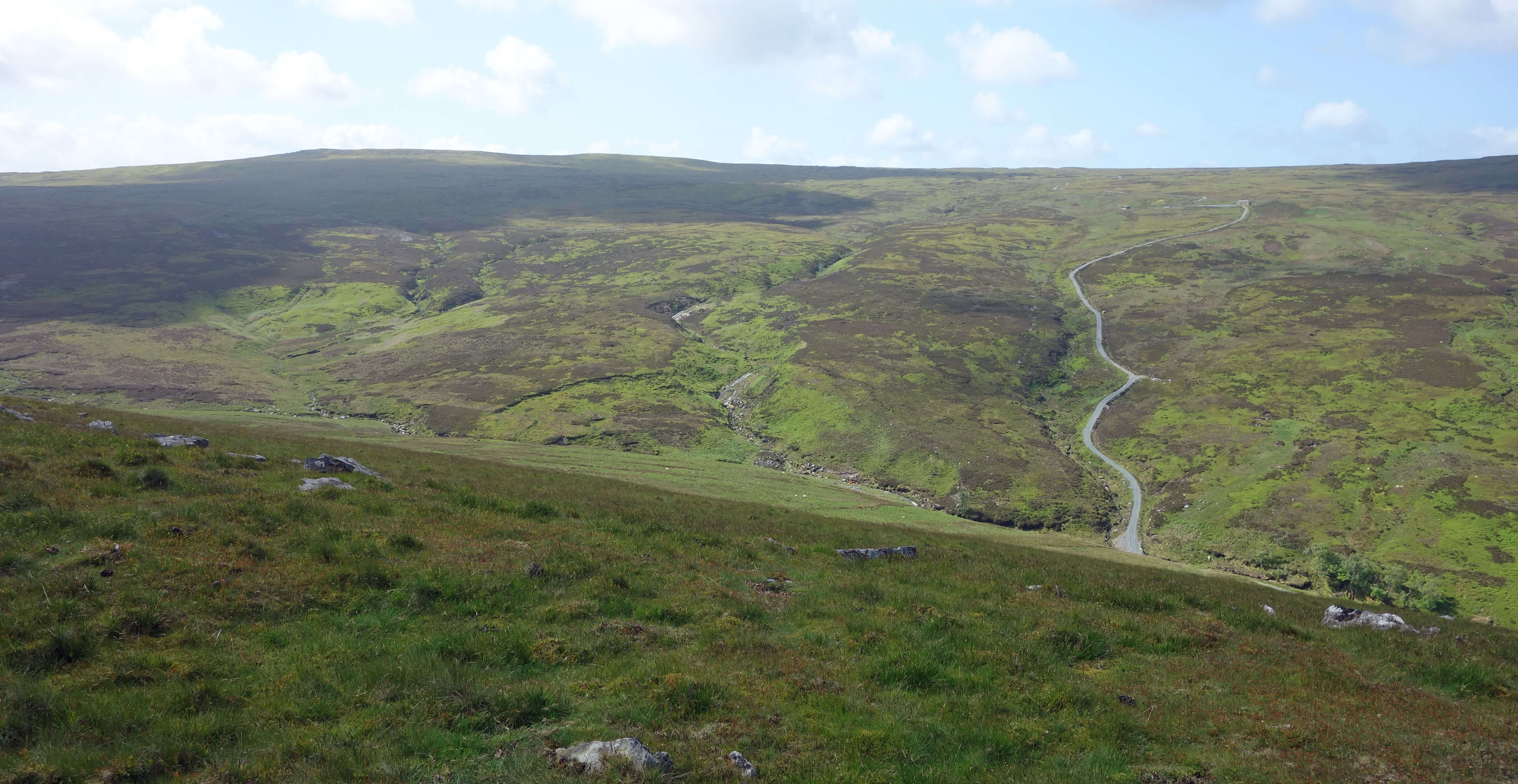 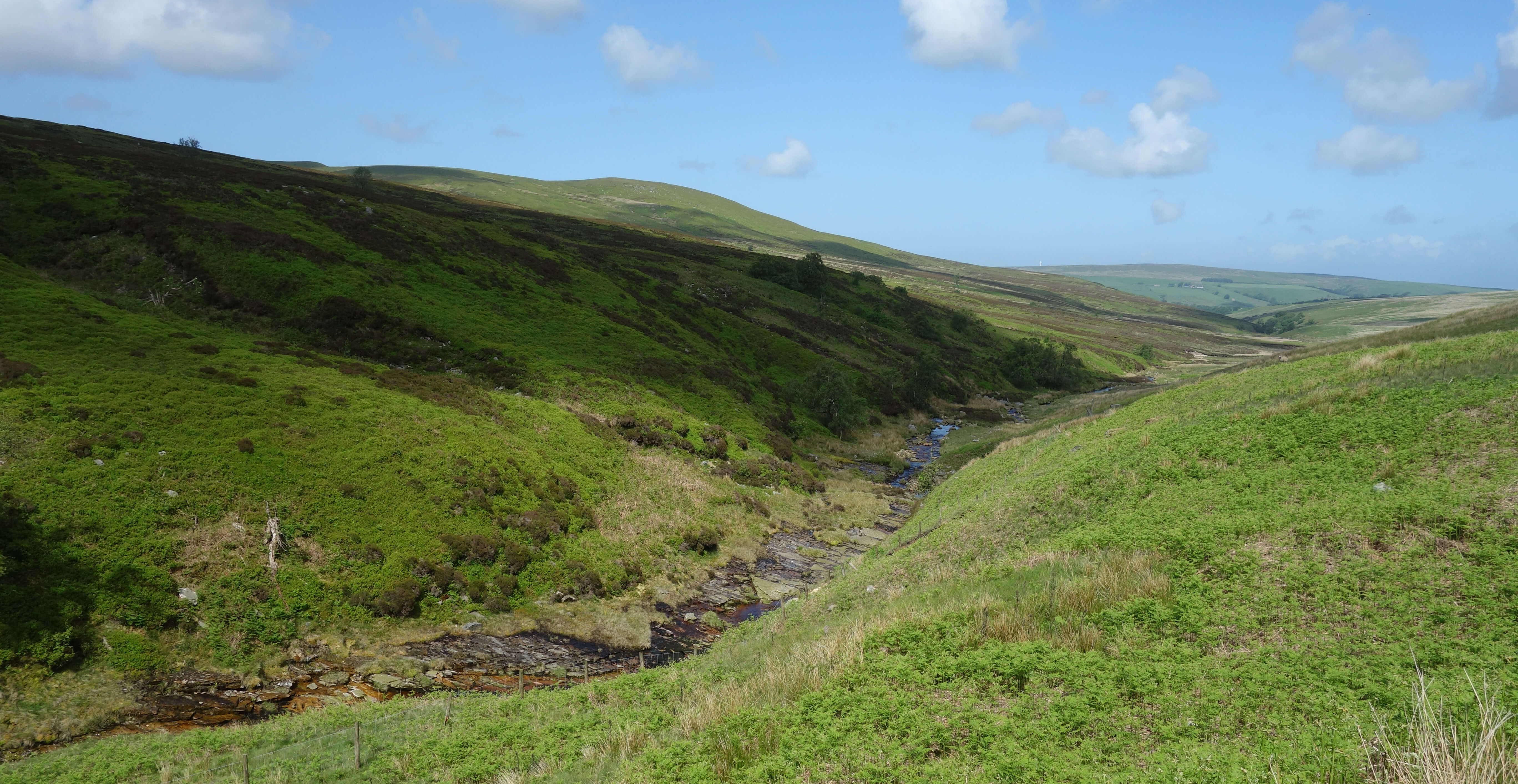 Left: The shooters' track seen from the Hornby Road, with Wolfhole Crag to the left.
Right: The infant River Roeburn.

The licence to kill the gulls may have been renewed simply to ensure that they didn't begin to increase again. I am sure, however, that the gamekeepers were not unhappy to continue killing gulls because they were occupying moorland that would otherwise host grouse – and, moreover, the gulls were partial to grouse eggs and young. All this was before the Open Access legislation of 2000. Walkers were not then allowed on these moors and few people knew about this killing. In 2001 the Bowland Fells became a Special Protection Area, which meant that under EU law, and hence UK law, the gulls became legally protected. Nevertheless, the licence to kill gulls continued to be renewed. Why?

Further on up the shooters' track, as I approached the watershed at Brown Syke, there was nothing but gulls in the sky. It became a little unnerving. Don't be misled by the 'lesser' in the name of lesser black-backed gulls. They are larger than buzzards. They are, thankfully, not as aggressive as buzzards when they fear their young are being disturbed. They don't dive-bomb a walker but they swirl about in great numbers, squawking their disapproval, swooping over the moor occasionally but not towards the walker. After a while, one becomes accustomed to their presence – as a cow does the flies around its head. 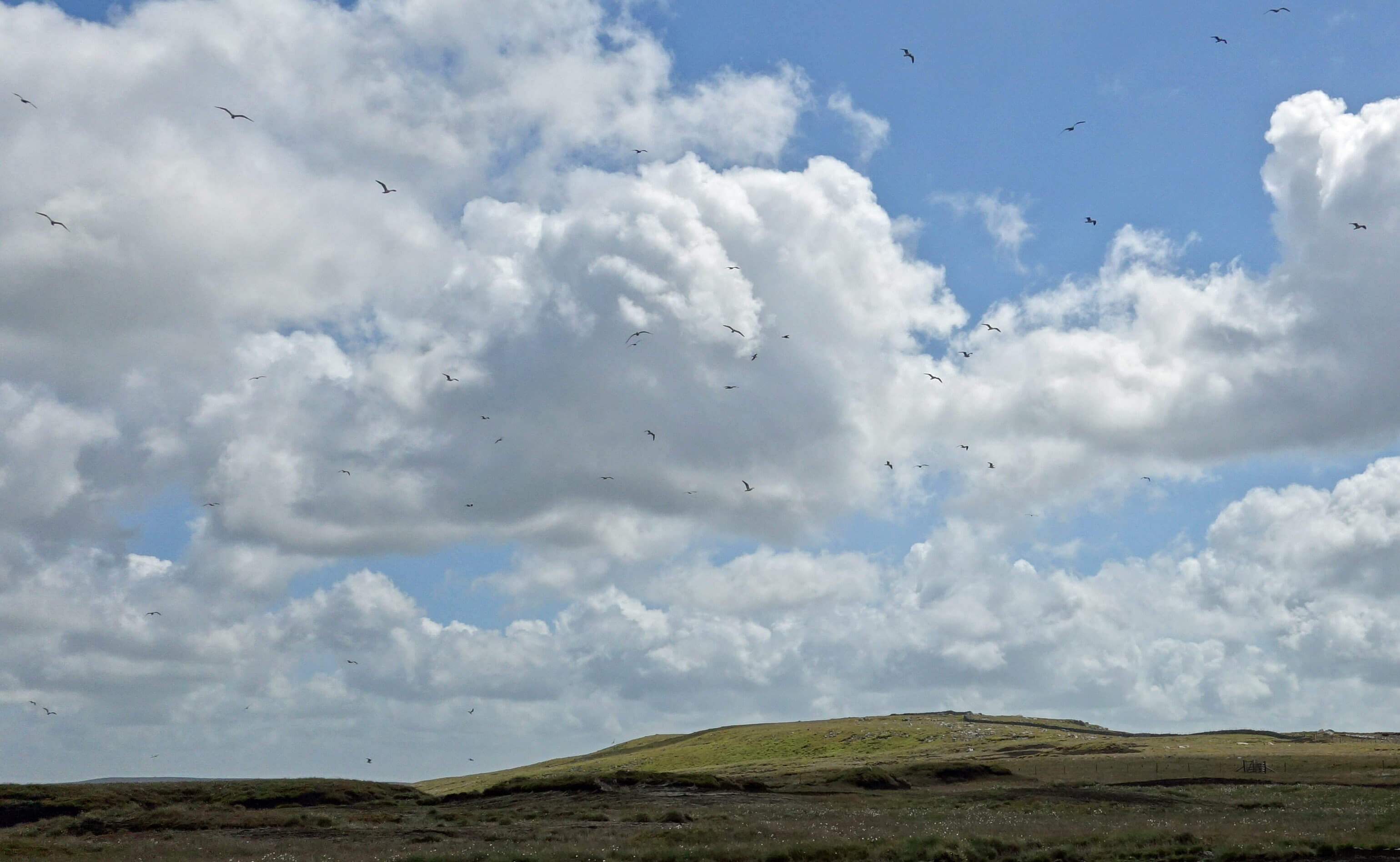 Left: Wolfhole Crag, with a few of the gulls.

The most gulls that I had about me at any time was about a hundred. My impression is that there are fewer gulls than there were. They used to congregate on Brennand Fell, south of Wolfhole Crag, but I think that they have dispersed more widely about the moor, sensibly avoiding becoming a shooting gullery. Not that they were always shot: some were gassed, or poisoned, or netted, or (no doubt) just trampled on.

At the watershed I turned east towards Wolfhole Crag but halfway along I changed my mind. I never feel beholden to any objectives I had at the start of a walk. Wolfhole Crag (527 metres) was only a few metres higher than where I had reached and I could see that I wouldn't be rewarded with a better view at the top. The grey shape of Pendle, for example, could hardly be seen. It was windy too, and the wind had more puff than me. There's no pleasure walking amongst these gulls and I could see no point in disturbing more of them – so I turned to walk back the way I came.

There seems to be only two possible reasons for licensing the illegal killing of the gulls. Either Natural England did not realise that the killing was illegal, which seems scarcely credible for a body specifically responsible for environmental law. Or Natural England turned a blind eye to the illegal killing. Perhaps they felt that nobody would know or care about activities on these moors or would make a fuss about gulls. Perhaps they didn’t want a disagreement with wealthy landowners who preferred grouse to gulls. Eventually, in 2011 or so, the licence was not renewed. Why?

As I dropped down the shooters' track I saw on the distant horizon two cyclists on the Hornby Road. They were the only people I saw all walk. Eventually regaining the Hornby Road, I walked north, pausing at Alderstone Bank, where, according to my notes of a previous occasion, there is a grand wide-ranging vista from Black Combe around to Pen-y-ghent. On this occasion I could not see the former at all and the latter was still just a grey outline. Not that I am complaining: the nearer views of Roeburndale and Goodber Fell were perfectly pleasant. 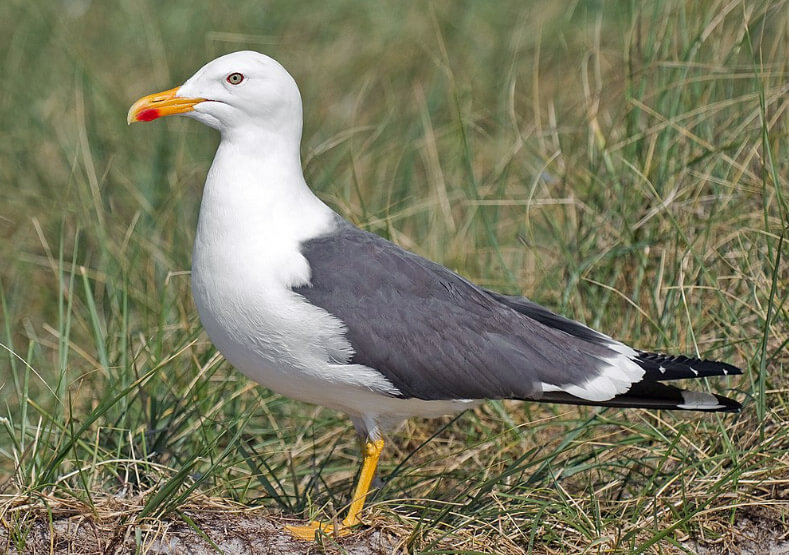 The licence to kill gulls was not renewed after there was some public concern, with critical articles in the national press, that Natural England was enabling this illegal killing. In 2012, after the decades of killing, there were said to be about a thousand gull nests on the Bowland fells. Natural England said in 2012 that despite the absence of a licence “widespread killing” continued. In 2017 they wrote that the “killing of juvenile lesser black-backed gulls was undertaken at Brennand Fell, part of the Bowland Fells SSSI, without Natural England’s consent”. A 'reprimand' was written but nobody has been charged with an offence. Why?

I strode back on the Hornby Road with the highlight being a spectacular display from a curlew. It must have had young nearby because it swooped about me with blood-curdling calls. I really enjoyed it. No longer was it entertaining me with its liquid trills as it planes earthward. It repeatedly swept close to me, harshly caterwauling. It was great to see the bird in action at such close quarters, although I suppose I should regret disturbing its family.

Nobody has been charged after the clearly criminal actions because Natural England prefers to reach agreement about environmental practices through negotiation and doesn’t really have the resources for court cases, especially against wealthy landowners. I don’t know what has happened in recent years. I expect that there is a stand-off, while the legal position is clarified. Since we are no longer part of the EU I assume that the EU designation of Special Protection Area has lapsed. Although the government did say (for what it’s worth) that we will inherit EU laws, I’d guess that this particular law is one that this government and its friends would like to end. So the future of Bowland gulls seems bleak.

Bowland is well-known for its grouse-shooting, with the record bag of 2,929 grouse on a day's shoot being set here in 1915. It is less well-known that more gulls than grouse have been killed in Bowland in the last fifty years. It doesn't end there. The region I walked in is also notorious for the disappearance – oh, let's be clear, the killing – of two rare protected hen harriers in 2015. Their tracking devices suddenly stopped working. It is very rare for such a device to fail, so two failing within a short distance of each other is implausibly unlikely. No trace of the hen harriers and their trackers was found. It is a macabre irony that all this killing is to enable the survival of a particular bird – to be killed for fun.

I have mixed feelings about the gulls in Bowland. Although the gulls have been here for nearly a century it still seems incongruous to walk these moors to the accompaniment of screeching gulls. If you close your eyes and just listen then you'd imagine yourself at a harbour, say, with gulls scrapping over the waste from a fishing boat. Of course, I would prefer to hear what we regard as moorland birds – curlew, lapwing, golden plover, skylark, grouse (although no doubt someone will tell me that some of those aren't really moorland birds either). The gulls' colonisation of the fells is, I suppose, a natural one – although one forced by our ruining their ancient nesting sites by the coast. On balance, I’m not sure that I really want gulls on the moors. I am, however, certain that I don’t want gamekeepers killing them.