138. &nbspGhosts, Lunatics and Invincibles ñ but no longer

In 1900 Anthony Hewitson wrote a book entitled Northward (Hewitson, 1900). The title is less informative than the sub-title ñ Historic, Topographic, Residential, and Scenic Gleanings, etc. between Preston and Lancaster. The book described the region passed through on a journey along and around the twenty miles or so of the A6 between Preston and Lancaster. I began my exploration from the A6 at Barton, heading east and then southward towards Preston.

Hewitsonís book focussed on the many mansions near the A6. The impression is given that the whole region between Preston and Lancaster was parcelled up into large estates, the ownership of which passed amongst families whose names appear over and over in the book: Bird, Brockholes, Butler, Dalton, Garnett, Lamb, Parker, Pleasington, Rawlinson, Shuttleworth, Tyldesley. Most of the estates were indeed large. The Barton estate, through the remains of which I walked, was sold in 72 lots in 1899 for £141,652, equivalent to about £12m today.

There is little mention in the book of what Hewitson and the various estate-owners would regard as the peasantry. They appeared only in incidental anecdotes. For example, it was said that in 1863 an accident occurred near Barton Brook Bridge when a large waggon ran out of control down a steep hill and killed three horses and a man. It must have been a tragedy for three valued horses to be killed. To help avoid similar accidents the hill was made less steep in 1869, with a tablet placed at the top reading ìTo relieve the sufferings of the animals labouring in our service Öî. 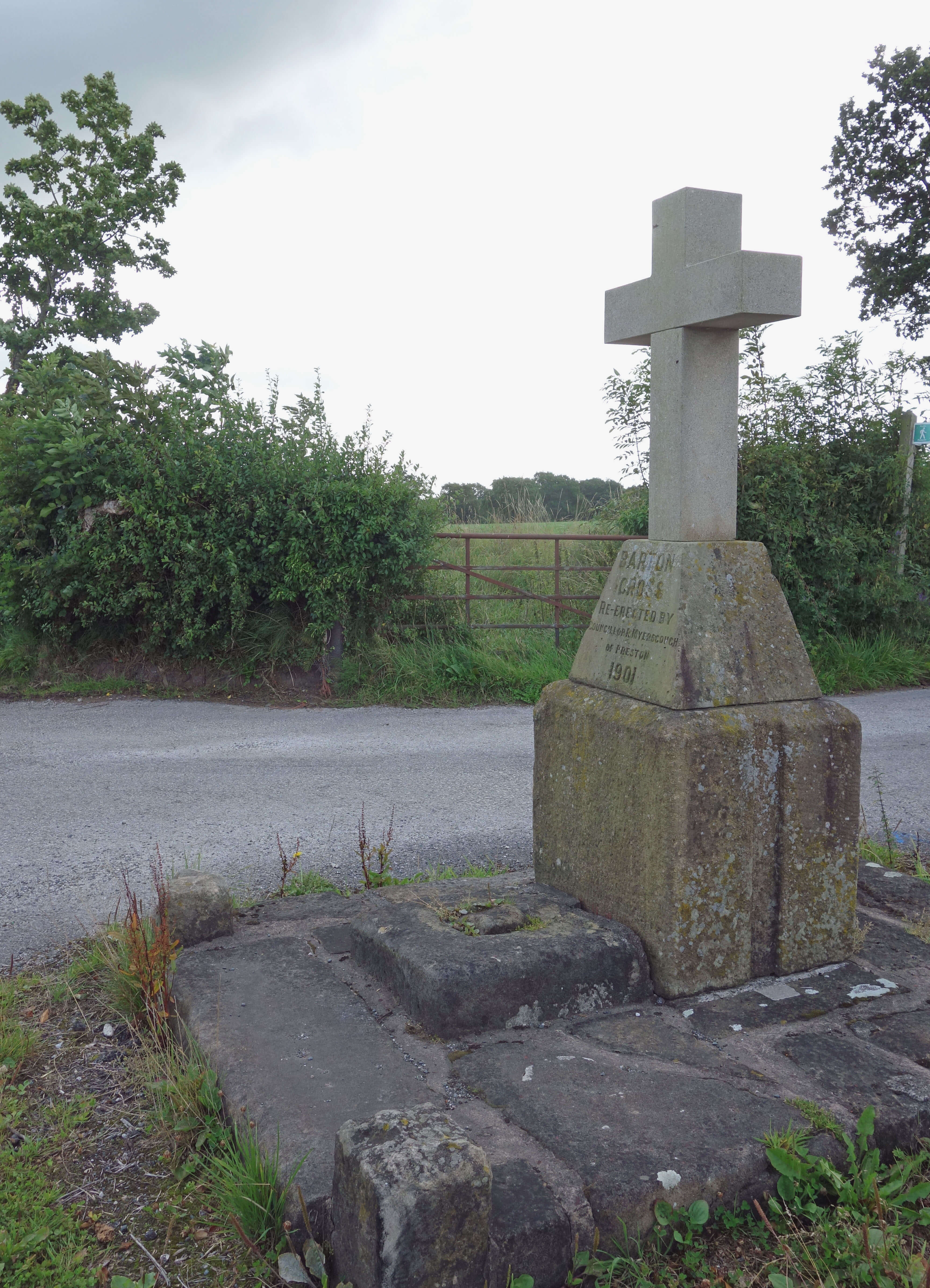 After crossing the M6 I came to what is marked on the map as an antiquity, Barton Cross. The base may well be old but the rest isnít, especially the absurd white cross on top. I then headed towards Whittingham House. Hewitson described this house in some detail but I couldnít see it (if itís still there) behind high hedges. So I walked on to Chingle Hall.

According to a BBC report, ìmany people believe Chingle Hall at Goosnargh to be the most haunted house in Englandî. Since the present owners do not, I understand, want to perpetuate this reputation they will not thank me for mentioning this. Who would want passing strangers peering into their property in search of apparitions? I didnít see any. I experienced no spine-Chingling events.

I do not normally allow in these pages claims about the most this-or-that without some rigorous scientific justification. So I have searched the pages of phenomenology for a measure of hauntedness, but without success. I therefore propose the following formula for the coefficient of hauntedness CH:
CH = i * n * g * l * e
where i is the average number of incidences of ghostly visitations (as detected by any of the human senses) per week; n is the number of distinguishably different ghosts per cubic metre of the house; g is a measure of the gory ghastliness of the pre-ghostís(s') demise(s); l is the average length of ghostly manifestation; e is a measure (on the Beaufort scale) of the average experience of wailing, knocking or other manifestation. As in all science, these factors must be determined by extensive reliable observations. And therein lies a problem.

Hewitson did not mention Chingle Hall. Perhaps he was scared off by its reputation. He also didnít mention the nearby County Lunatic Asylum. This asylum had opened in 1873 and was at one time the largest mental hospital in Britain. Although the buildings were of no interest to Hewitson they were, as were similar asylums elsewhere, on a grand scale and a matter of some civic pride. Winchester (2006) describes the Whittingham asylumís ìvery generous and imaginative landscaping and monumental buildingsî, including hospital, gasworks, church, sports facilities and railway station with its own private railway branch. It closed as a hospital in 1995 and has, to some extent, been refurbished as a residential Guild Park.

I had intended to walk east to see how the refurbishment was getting on and then south across fields. However, there is a lot of new building going on in the area and it is not difficult to imagine what they are doing with the old asylum. And I had already had problems locating footpath signs and stiles among the overgrowth and finding that the paths disappeared into brambles, nettles and Himalayan balsam. So I retreated to the B5269 and returned west. I was clearly within an area beset by arguments about building developments. There were banners and signs urging protest ñ and building work under way regardless.

Before reaching the M6 I took a path south. I must have been foolishly attracted by the name, Pudding Pie Nook. It was a scruffy track, awaiting planning permission for development (as everywhere seemed to be), and the footpath again became a morass of brambles and nettles. So I retreated to the B5269 again and continued west. By now I just wanted this ordeal to end, so I took the simplest option of walking to the A6 and then along it south into Preston, which is no fun at all.

After crossing under the M55, I noticed ëCromwellís Moundí marked as an antiquity on the map so I set off on the B6241 to see it. However, after half-a-mile I changed my mind. There were new buildings and roads not on my map and I suspected that the mound wouldnít be worth seeing anyway. It probably has an absurd white cross on top. Or it has been flattened for new houses. (Later I read that I wasnít far wrong. The mound, which is supposed to be the site of the Battle of Preston of 1648, is due to have a retail park built upon it. A retail park isnít a park.) &nbspSo for the third time on this walk I backtracked. 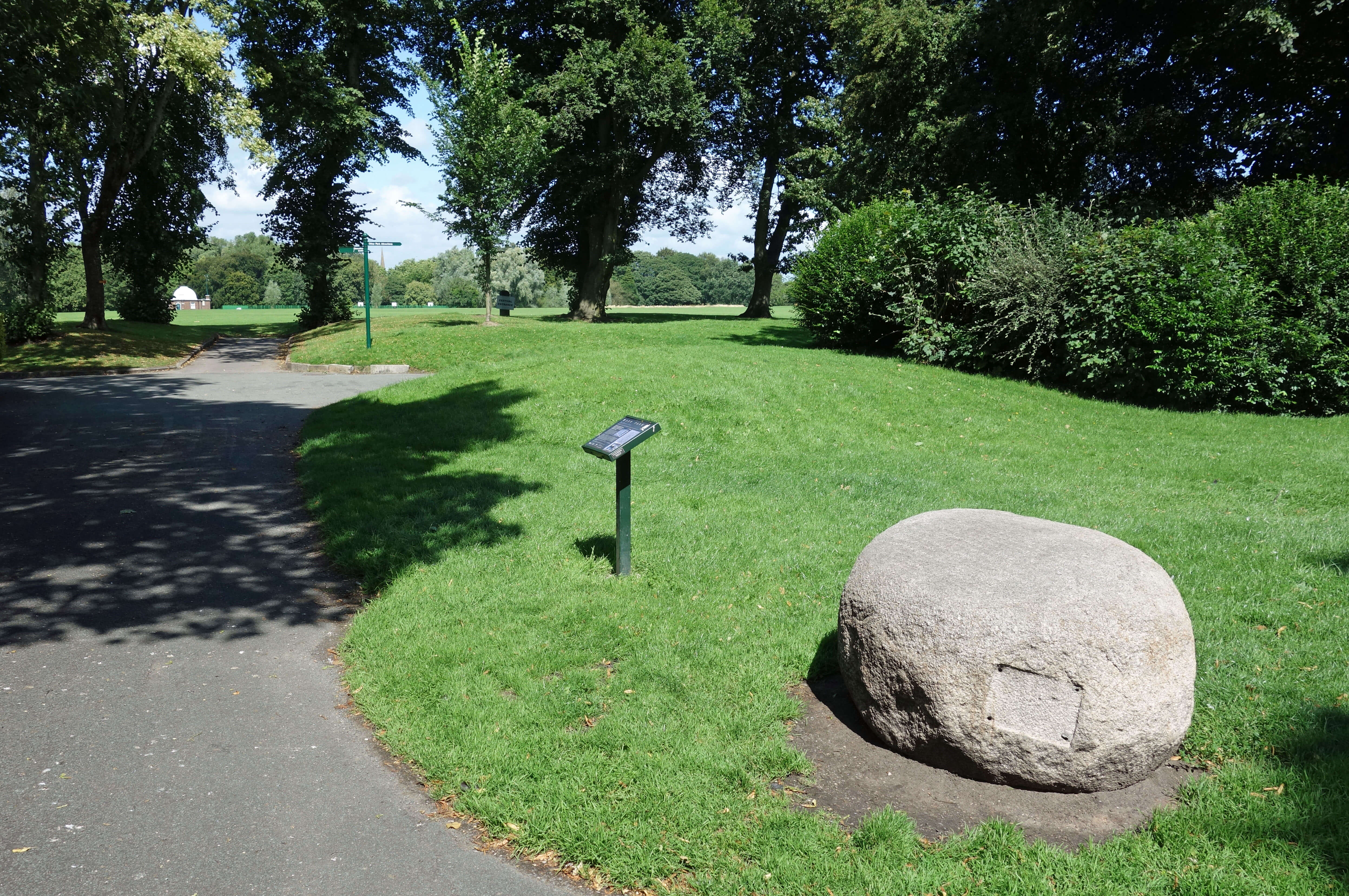 I turned my mind off and plodded down the A6, pausing at Moor Park, a rare area of green in Preston. It was created as a municipal park, from common moorland, in 1833. At the corner of the park I came across a memorial to Tom Benson, whom I had never heard of, which is remiss of me, since he was a champion long-distance walker. He set some sort of world record in 1986 by walking around Moor Park non-stop, covering a total of 415 miles. He could have walked from Preston to Weston-super-Mare and back.

Across the park I could see where in 1888-1889 a group of men ensured that the proud name of Preston would be forever remembered and revered throughout the land, which is more than can be said for all the estate-owners that Hewitson wrote about. Preston North End football club won the league and cup without losing a game, a feat that has never been matched. They were known as ëThe Invinciblesí. The site of their ground at Deepdale is the longest continually used site of any English Football League team.

Of course, Hewitson did not mention football in his book, as he was writing a ëcounty historyí. It is said that history is written by the winners although it is evidently truer to say that it is written by those who are able to write histories. Hewitson was a well-to-do man on friendly terms, it seems, with all the well-to-do estate owners in the region and he and they naturally assumed that the only county history worth having was one about those owners and their estates. The large majority of the population who lived and worked in the region (and who celebrated the success of Preston North End) did not have the time and skills to write history, and are therefore not part of it.


&nbsp139.   Ruskinís View and a View of Ruskinís View
&nbsp137.   Bowness, Empty and Full
A list of all Saunterings so far