134. &nbspNorth and South in the Arnside and Silverdale AONB

There is one form of walking that I am unlikely to take up (although I dabbled on this occasion) and that is walking along a ‘literary trail’. I could, for example, walk the South Downs to retrace the footsteps of Virginia Woolf, Rudyard Kipling and Henry James or wander around ‘Jane Austen Country’ in Hampshire. Within our region, I could walk the Brontë Way in search of Wuthering Heights.

I dropped Ruth off at the Gaskell Memorial Hall in Silverdale (where she had a ‘music day’), parked by Eaves Wood, and set off on a circuit of the Arnside and Silverdale Area of Outstanding Natural Beauty. Everywhere was profusely green. Bracken and nettles were head high but I didn’t need to worry about them as the many paths were clear and well-used. I walked along The Row, across fields to Silverdale Green, and along a wooded track to emerge with views across the marshes to Morecambe Bay. Rounding Jenny Brown’s Point, I walked north along Lindeth Lane, where I paused near the top.

I hoped to gain a view of Lindeth Tower but it is protected by high walls and dark trees. However, I could see enough to tell that it was a rather strange, gaunt building. It was the summer home for several years of the Victorian writer Elizabeth Gaskell (1810-1865). Here she wrote one of her novels, Ruth, in 1853. Gaskell herself did not, it seems, think much of Lindeth Tower, describing it as “a queer ugly square tower”. Still, you can’t look at it if you're inside writing.

Ruth (the one in the book) is a young unmarried mother who struggles to gain respect within society. The novel raised issues of sin and illegitimacy that Victorian society found uncomfortable to address. Perhaps for that reason, Ruth was and is the least highly-regarded of Gaskell’s novels. At the time of her death in 1865 Gaskell was grouped with the Brontës and George Eliot but her reputation gradually declined, culminating in the now notorious review by Cecil in 1934. He opined that Gaskell was “all a woman was expected to be; gentle, domestic, tactful, unintellectual, prone to tears, easily shocked” and that she “makes a creditable effort to overcome her natural deficiencies but all in vain".

Cecil is usually referred to as Lord David Cecil. British people are peculiarly fond of giving each other titles. It is intended to induce appropriate attitudes towards the entitled. It is like calling a footballer ‘Chopper Harris’ to induce trepidation in the opposition. Cecil’s opinions as a literary critic are not rendered more worthy by the addition of a ‘Lord’. An art critic should be able to assess a work of art as a work of art, irrespective of any characteristics of the artist. Cecil does not make a creditable effort to overcome his natural deficiencies as an entitled man. Anyway, Lord David Cecil wasn’t really a Lord. He was a son of the 4th Marquess of Salisbury but not the first son. David Cecil’s ‘Lord’ was a ‘courtesy title’, whatever that means.

The critical tide concerning Elizabeth Gaskell began to turn in the mid-20th century, but slowly. Arthur Pollard, in Mrs Gaskell: Novelist and Biographer (1965), agreed with Cecil that her work was “entirely feminine”, which he ensured we wouldn’t forget by referring to her throughout the book as Mrs Gaskell. Today, Gaskell’s name is at least more widely known, thanks to TV adaptations of her work. I have not seen any of the Gaskell TV series or read any of her novels but as I envisage her ensconced in the garret of Lindeth Tower, struggling to portray the plight of a poor, pregnant, abandoned 15-year-old, I can’t help feeling that it is not so much her femininity that she had to overcome but the fact that she was wealthy, leisured, educated and upper-class. But am I thereby guilty of a form of prejudice too?

I detoured a little to see again the Gaskell Memorial Hall, from where melodious strains wafted. Clearly, Silverdale thinks enough of its link to Gaskell to name its hall after her. I noticed a Gaskell Close nearby but otherwise no other Gaskelliana. Silverdale must try harder if it wants to be on the Gaskell Trail. I understand that members of the Gaskell Society sometimes pilgrimage here. Perhaps they deserve a Gaskell Gallery, a Gaskell Bistro, and so on.

Actually, no, I don’t think Silverdale needs any more visitors. On this summer Saturday the place was full enough (although it is no doubt less full when people can holiday abroad). Every car-parking space was occupied. I walked for four hours and never for more than a minute or two was there nobody nearby. People milled about, somewhat aimlessly, everywhere: families, grandparents, youths, of all shapes and sizes. Few of them had backpacks and walking boots. I felt like an Olympic athlete entangled in a fun run. Until, that is, one of my fellow walkers took me under her wing as I struggled to relate my whereabouts to my map. It is impossible to get lost, with the bay and estuary to the left and the slopes of Arnside Knott to the right, but there is such a profusion of criss-crossing paths that it is possible to be unsure where you are on them.

Beyond the Cove I walked through the first of several large holiday camps – larger than shown on my map, anyway. I hadn’t realised that this corner of the AONB had been given over to holiday camps. Perhaps that’s why Cumbria wanted it. It could allow holiday camps here while keeping them out of real Cumbria. I expect that the AONB’s Executive Committee has a say in the matter but I don’t know if it has the power to decide anything. The Arnside and Silverdale AONB webpage says “This extraordinary place is famous for its amazing wildlife, stunning scenery, and superb walks … the area is simply awe-inspiring - full of natural spectacles”. The place is not so extraordinary that it has the protection necessary to prevent it being spoiled. 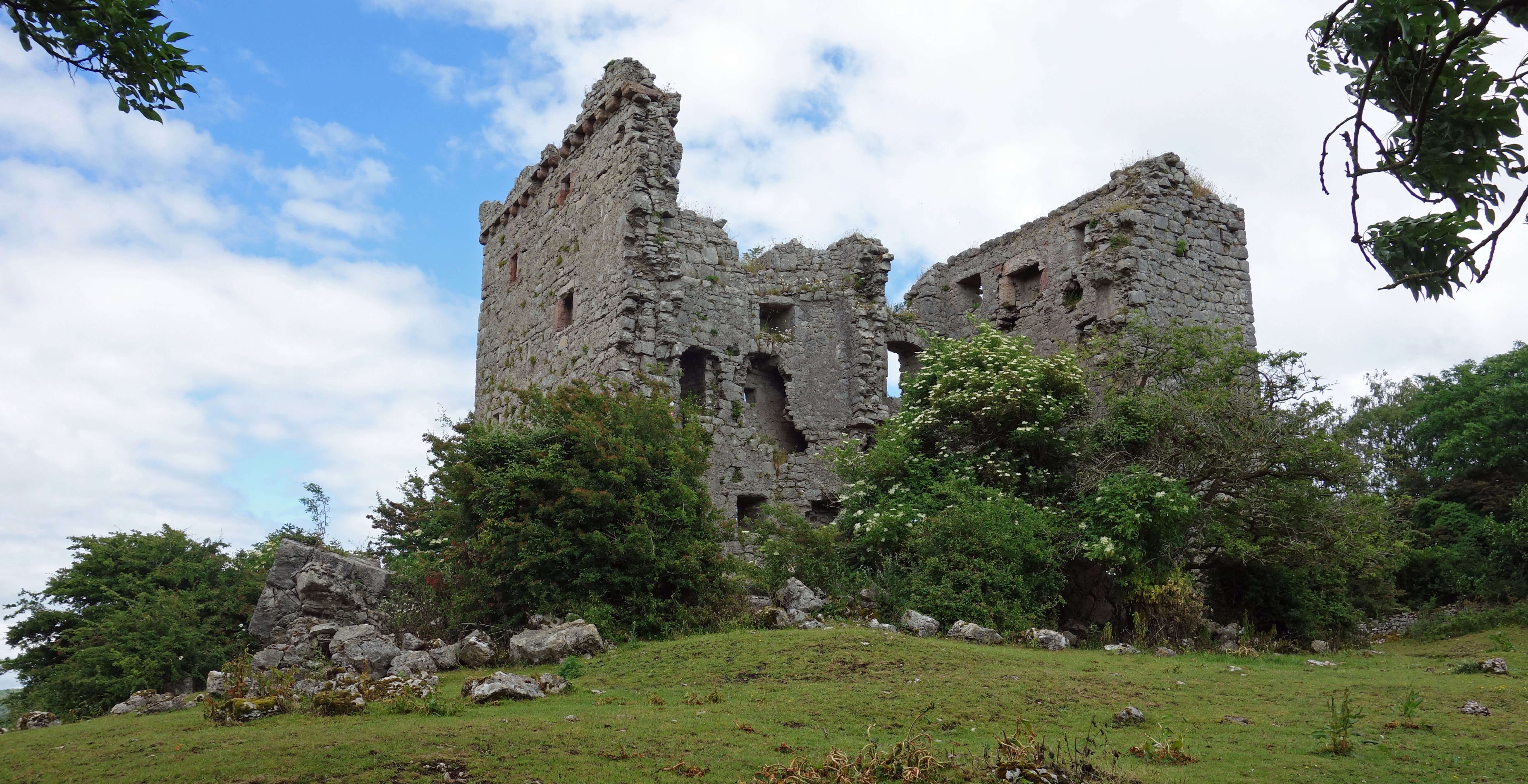 Emerging from the woods of Arnside Park I came to the holiday park of New Barns before I expected to. There seemed to be quite a party going on. I left them by walking up Arnside Knott but here there were more people wandering about in all directions. More by luck than judgement I came across the bright white trig point (159 metres) within the trees on top but I didn’t linger as some family tantrum was underway.

Instead I dropped down, passed Arnside Tower, and curved around the base of Eaves Wood back to the car park. It was now jam-packed with cars and I thought that I might have difficulty extricating myself. Then I noticed a couple returning to the adjacent car and waited for them to leave, so that I could more easily escape. But they settled down for drinks and cake, several slices of which were consumed. Eventually they left and so did I, picking up Ruth (the one not in the book) on the way.


&nbsp135.   By the Old Farmhouses of Dentdale
&nbsp133.   The Limestone Hills East of Settle
A list of all Saunterings so far