We left the house early-ish on Monday morning and decided to walk in 1847. We walked up the narrow, stony track, past empty fields, to Moorside House. [I will butt in, in italics, from time to time to relate this fantasy to the scene today. They specified 1847 because that is the date of the first OS map available on-line. It was a good job that they didn’t decide it was 1847 before leaving the house because their house didn’t exist in 1847. Neither did almost all the other houses in the village. In 1847 there were only about a dozen houses clustered around the church and pub. However, the layout of the village tracks (now roads) was much as it is now. Moorside House is now called Moorside Farm.]

Turning right, past the Quarry Road track, we passed the Caton Workhouse, a building of some grandeur, which may be some compensation for the poor souls compelled to live there and trek across to work in the Caton mills. At least the women and boys only have to work for ten hours a day now, thanks to the new Factory Act. [Quarry Road ran up to the quarries near the top of the moor. It still does although the quarries have been disused for over a century. Caton Workhouse closed as a workhouse in 1866 and was converted to a residence, Moorgarth.]   Passing Tenters Farm [still there] and crossing Tarn Brook, views opened out over fields to the east. [They don’t today because Tarn Brook Plantation was planted some time between 1847 and 1891 (the date of the next OS map on-line). It looks a natural woodland now.] 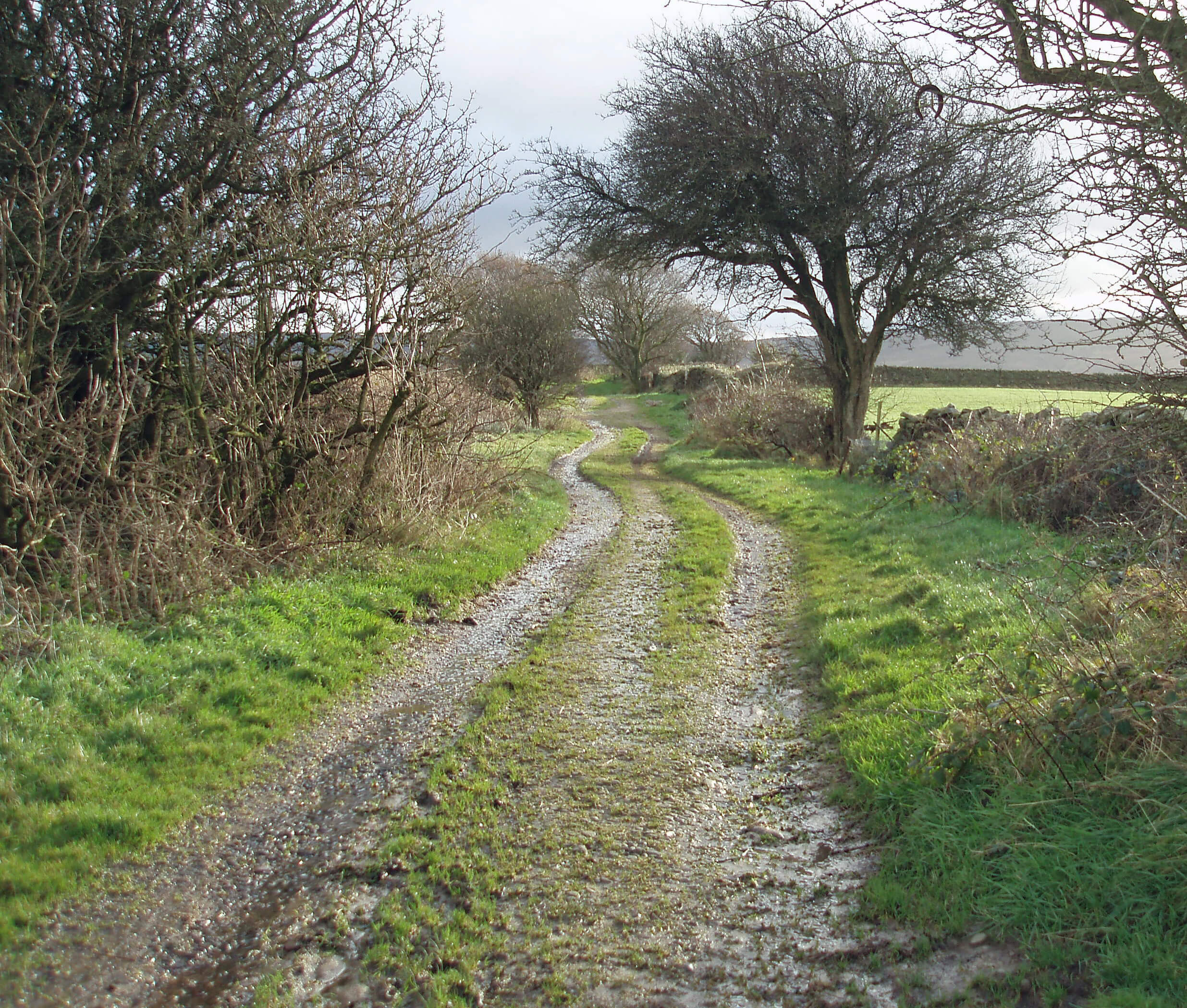 We turned left onto Littledale Road [although called a road on the 1847 map it was probably a rough track], ignoring the track straight ahead to Cransfield House [not named on the 1847 map, still there today], and passed two farms to the right, Stoven House and Hodgson’s [now called Stauvins Farm and Ravenscar Farm].   After a while, Roeburndale Road [another track then, no doubt] branched off to the left but we continued straight ahead over the rise of Littledale Road, pausing at the ancient Cross Stone at the highest point. [The main road now turns to the right. It was built between 1847 and 1891. The present track of the old Littledale Road (shown right) perhaps indicates the state of these ‘roads’ in 1847. I doubt that the cross was still there in 1847 but its stone base was. It’s there now.]

We then dropped down to pass the Crossgill Bobbin Mill [where the scout camp now is] and took the side track to Fostal Bridge over Foxdale Beck – Fostal presumably being a corruption of Foxdale. [New House Farm, on today's map, wasn’t there in 1847 but it was built before 1891 and so is new with respect to the other farms in the region. In 1847 the main track continued to the hamlet of Crossgill along what is now an overgrown avenue between trees. The continuation of the road to Crossgill wasn’t completed until some time between 1895 and 1913.] 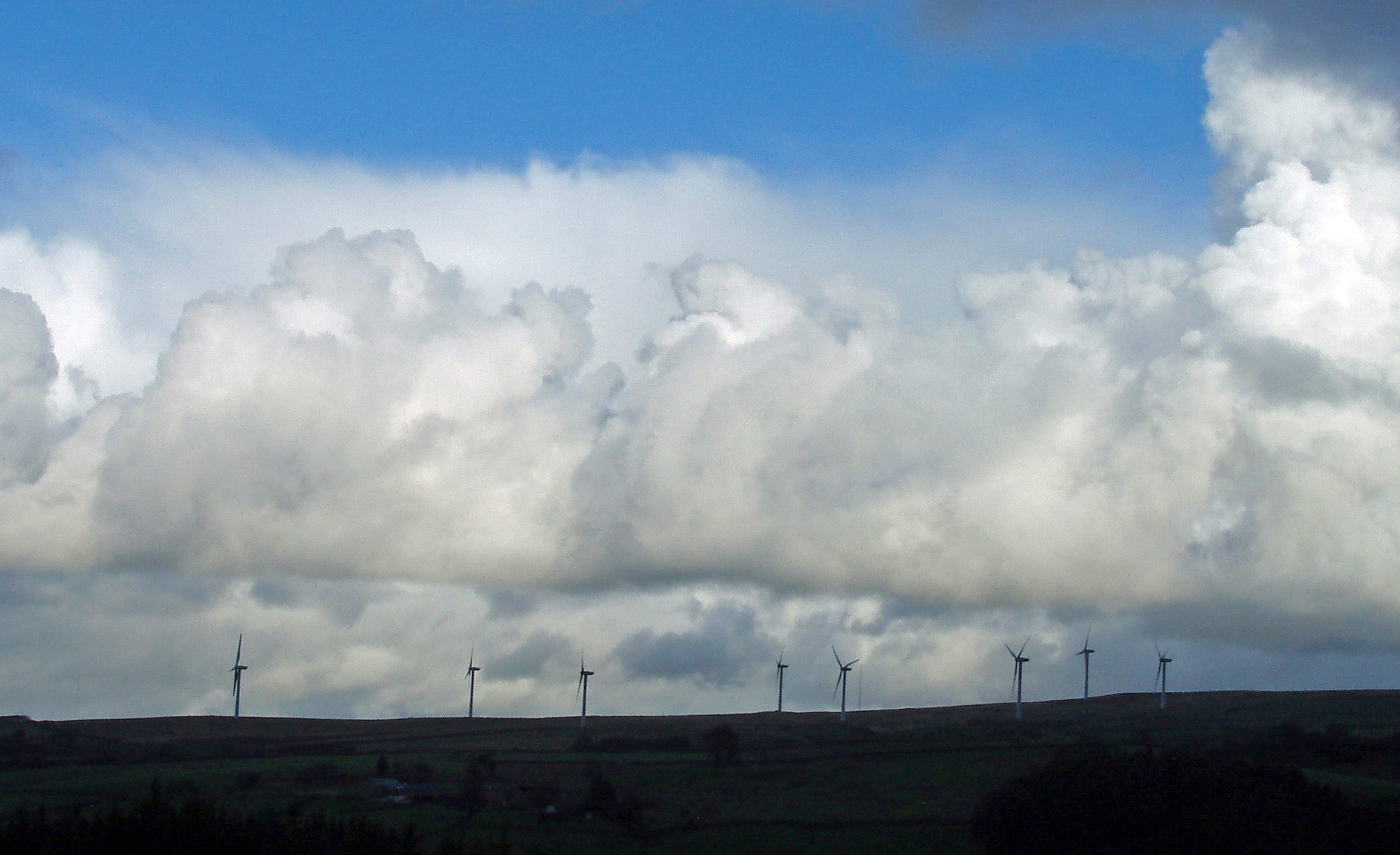 We then walked through a pleasant dell by Nicka Wood and Udale Beck rising to Bell Hill House, with views to the moor below Ward’s Stone. [Bellhill Farm now has a few new residences adjoining.]   We didn't continue as far as Dale Side but took the airy track east to Field Head which provided views over to Caton Moor. [Caton Moor was empty then. Now we have windmills - but only three or four working. Never mind the windmills - what about the clouds! Field Head is still a farm. Dale Side, built 1685, is marked on today's map, but is derelict, although maybe the barn is still in use. It is a listed building, as are many of the other buildings passed on this walk. The path to Field Head is a little less airy now as a number of plantations were added to the map between 1847 and 1891. Again, some of them look natural woodlands now although others have dense conifers. I don’t know if they would have been planted with conifers in the 19th century – or indeed why there was a spate of tree-planting at this time.]

From Field Head we walked across boggy fields, down through a wood, to cross Foxdale Beck and emerge at Tongue Moor. Ruth saw a white stoat (113) near here: I missed it. [The name Tongue Moor referred to a farm or house, not to the moor itself. It dated back to at least the 15th century but was demolished in the 1970s. The Littledale Hall that is now here is not on the 1847 map because it was built for the Rev. John Dodson who retired as Vicar of Cockerham in 1849. His isolated ‘free church’ a little further on bears a date of 1849. Littledale Hall is now a residential addiction treatment centre.]   Turning west, we walked past the quarry and coal pits and took a little detour to the hamlet of Crossgill, which is not much more than a farm, with a date of 1681, and the Crossgill Chapel, built in 1755. [The quarry and coal pits are now within a small plantation. The site of the old quarry is clear but not that of any coal pits. Crossgill is little bigger today than it was in 1847. The chapel was renamed as St Anne’s Church by 1891 before being converted to a residence in the 1990s.]

We then struggled up the steep track passing Haws House [still there], turned west on the Roeburndale Road, crossing Crossgill Beck and walked on, with wide views over Morecambe Bay and to the Lake District hills. [The Brookhouse Brickworks near Crossgill Beck came and went between 1847 and now.]   After passing Berry’s Plantation, we re-joined the Littledale Road and walked home, our feet beginning to feel a little sore. It’s time someone made some stout walking shoes. How old Wordsworth manages to wander about his hills I don’t know. [Berry’s Plantation (called the Roeburndale Road Plantation today) looks a natural woodland to me. Nearly all the woodlands on the 1847 map are called ‘Wood’s – and I assume these are more natural than the Plantations. Why would anyone plant such a Plantation before 1847? Perhaps ‘Plantation’ doesn’t necessarily mean that trees were planted?]

[The overall conclusion from this walk is that anyone who lived in this region in 1847 would have little difficulty in finding their way around today. Most of the tracks (called roads then) have become tarmacked roads. The only new (between 1847 and 1891) road is the one avoiding the steep rise over the Cross Stone hill. The fields, fences and walls are all pretty much in the same place. All the farm buildings (except the derelict Dale Side and demolished Tongue Moor) are still there (modernised, of course) and most are still farms. It’s likely that some have the same families within them. Only one farm (New House) has been added to the set since 1847. It’s rather reassuring that in this rapidly changing world some things change hardly at all.]

[P.S. Our walkers had no camera in 1847, so I’ve re-used some photos taken a few years ago. Nothing much has changed since then.]


&nbsp121.   The Phantom Hills of Mallowdale Pike, High Stephen's Head and Gallows Hill
&nbsp119.   Silence, Serenity and Solitude
A list of all Saunterings so far