The region south of Hellifield is neither Dales nor Bowland. The map shows a number of hamlets – Swinden, Nappa, Newsholme, Paythorne and Halton West – but I can’t say that I had heard of any of them. The map also indicates many flattish fields, fine for sheep but dull for walkers. I read what little I could find about the region – and came across Paythorne’s Salmon Sunday (the third Sunday of November), when villagers gathered at the bridge to celebrate the salmon spawning in the Ribble. The custom has, of course, lapsed. Whether the villagers or the salmon lapsed first, I don’t know. Anyway, I set out, with little optimism, to look for salmon in the Ribble.

I walked first to Hellifield Peel, built as a tower house in the 15th century. Twenty years ago English Heritage produced a list of graded buildings that were at risk, that is, of being or becoming derelict. Hellifield Peel was on the list but it is one of the few that has since been revived, its restoration featuring on Channel 4’s Grand Designs.

After walking past some strangely empty farm buildings at Swinden, I continued to the Ribble for my first study of it. I waited for a while – but saw no salmon. Two footpaths meet here at the river but the OS map seems to indicate that the paths do not cross the Ribble. They clearly don’t in practice. However, the path at Nappa Ford, which I proceeded to next, is marked by the OS as crossing the river. If I were foolishly to trust the OS and attempt to cross would my widow be able to sue the OS for providing false information?

As I walked towards Nappa Ford I passed two women chatting at a gate. They looked at me quizzically. They knew – and I suspected – that there was no way across the river. At the so-called ford I paused again but saw no salmon. As I returned past the women I commented that it must be many years since anyone had used that ford. I was told that it may be possible to paddle over in a dry summer. But this was a wet autumn. The older woman then said “there used to be islands in the river”. “What happened to them?” I asked. “Oh, they removed them, to stop flooding, or something.” “Really?” I asked, “When did they do that?” “In the fifties” she said, as if it were yesterday. (I have since found a website giving some information about this ford, including the claim that it was used by the Romans.)

From Nappa I walked south on what seemed to be an old track called Needless Hall Lane. Needless to say, there is no such hall on the map today. I disturbed a roe deer and two hares. It was reassuring to see that there is still some wildlife about. I then had to tackle a second stretch of the A682. I should emphasise here that I am reporting on this walk for the edification of any readers, not to encourage anyone to follow in my footsteps. The A682 is sometimes said to be Britain’s most dangerous road. I expect that they mean for drivers. It is even more dangerous for walkers. 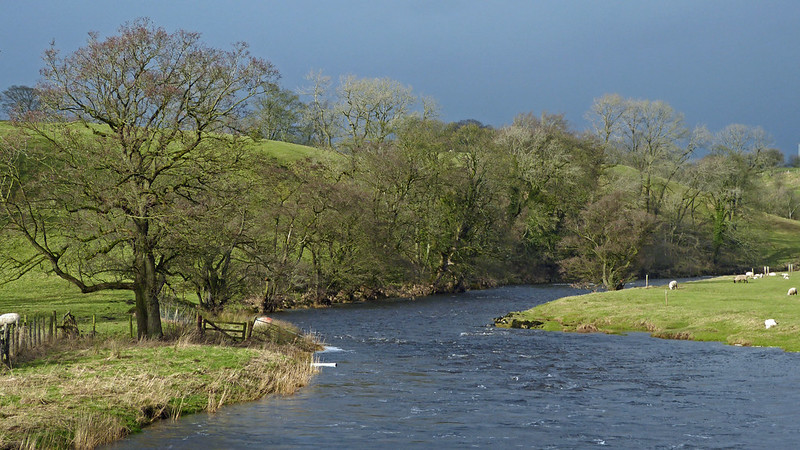 Left: The Ribble from Paythorne Bridge.

I reached Paythorne Bridge and settled with my sandwiches to look out for salmon. I saw none. I am not an expert salmon-spotter but I am sure that there are fewer salmon today than there were in the days of Salmon Sunday. The Environment Agency (EA) produces voluminous data on the numbers of salmon in British rivers. For example, its 2017 Ribble report shows (on pages 7 and 10) the numbers of salmon caught by nets and by rods for the years 1951 to 2015. It averages about 1,500 fish a year, although in the last three years, 2013 to 2015, it was less than half that number.

However, we need to look further back. The 1993 Ribble report says that “In 1867, the combined catch from the nets and rods was 15,100 salmon, yet by the end of the century the fishery had declined to such a degree that no salmon were caught in 1899 or 1900 by either the nets or rods”. From 1930 to the 1950s the Ribble was restocked with Scottish fry. The numbers of salmon have obviously increased from zero but they are still only a tenth of what they were in 1867. Who knows, there may have been even more salmon before then.

As I walked up to the small village of Paythorne I noticed a large number of cars parked and then saw a woman waiting to close the chapel door for the 2pm service. She hoped that I was a last-minute worshipper but I shook my head. I was devoted to my muddy fields. I contrived to lose the path but it didn’t matter. One field was much like another, and I could see a row of houses that had to be Halton West ahead. I eventually reached the wide, low-lying Halton Bridge, where I paused again. No salmon.

Many reasons have been given for the decrease of salmon: pollution, weirs and other obstructions, salmon disease, climate change affecting predators and prey at sea, salmon farms spreading parasitic sea lice, over-fishing, and so on. Over-fishing certainly but what about fishing? The EA reports read as if the EA is part of the angling industry rather than an independent body. It analyses the angler-supplied figures, when there could be many factors affecting catch numbers that have nothing to do with the salmon themselves, whereas it skims over the more objective, neutral, scientific data about the fish passing through the counter near Clitheroe. This is about 1,250 (according to page 16 of the 2017 Ribble report), which is of the same order as the number of salmon caught. Of course, the same silly salmon may be caught over and over but I think we can conclude that a high proportion of the salmon are caught. I think this is what the EA means by the ‘exploitation rate’ – a term that confirms a mind-set that the salmon are only there to be exploited, that is, caught, by us. It is estimated at 20% by the EA. Does catching the salmon do them any harm? Studies show that salmon have memories, form mental maps, and avoid ‘stressful’ situations. I’d imagine that being hoisted out of a river by a hook in the mouth is stressful.

Many solutions to the salmon problem are offered too. In 2014 angling associations wrote to the government “to demand urgent implementation of a five-point action plan”. In brief, we should: remove or bypass barriers; maintain adequate flows in all rivers; ensure that farmers follow best practice; increase funding for river restoration; and limit stock taken on north-east coast net fisheries. That leaves anglers to carry on as usual. I suppose the salmon problem is, like climate change, one where everybody has to contribute for a solution. Everybody else, that is.


&nbsp67.   The Consolation of Arant Haw
&nbsp65.   Grisedale and Another Tarn
A list of all Saunterings so far