141. &nbspIn and Out of the Lake District, in the Ennerdale Region

The Lake District National Park was designated in 1951 only after a thorough scrutiny of the terrain to determine what should be inside and outside the park. In the south, for example, Millom, Barrow, Ulverston and Grange-over-Sands, those notorious dens of inequity, squalor and industry, were carefully excluded. To the north, the northernmost lake, Bassenthwaite, was necessarily included but the actual northern border of the park was drawn some miles further north, for some reason. I am not so familiar with the north-western border ñ it is, after all, on the other side of the park for me and why would anyone head there, passing the more attractive landscapes on the way? We did, to have a look at those north-western borders.

The A66 west from Bassenthwaite Lake is within the National Park until it nears Cockermouth. Then the border veers south on a seemingly haphazard path across ordinary-looking fields. It then turns south-west through Ennerdale Bridge before swinging south-east to resume its southerly direction. We paused within this bulge at the Low Cock How riding stables. Ruth's ankle (which starred in 140) did not yet allow long, rough or steep walks but I was not so inhibited, so I left her at the stables and headed for the highest hill nearby, Blakeley Raise (389 metres).

I immediately became bogged down in Blakeley Moss, which is best left to the snipe, about half a dozen of which I disturbed. After retreating to the road, I passed the Kinniside Stone Circle, which is pointedly not in antique font on the OS map because it is of dubious authenticity, having been recently constructed where an ancient circle is thought to have been. Blakeley Raise is within the National Park but has few of the characteristics of a typical Lake District hill. It is smooth and grassy with only a few scattered rocks, none of which needs to be walked upon. From the top the view east is over the unexciting grassy expanses of Kinniside Common and the view west is over the Cumbrian coast, which is not in the National Park, to the Irish Sea.

From Blakeley Raise I headed east to drop down to Nannycatch Gate and then walk up Flat Fell but I was thwarted at Sillathwaite, where I could find no footpath signs. Ordinarily I would have marched through where the map says the path should be but I had no guarantee that thereíd be no further problems ahead and I had to get back to the stables on time. I was frustrated because I had hoped to take the path in the gully between Flat Fell (272 metres) and Dent (352 metres) to see why the former but not the latter is deemed worthy of inclusion in the National Park. If there is a rational explanation then it eludes me.

Dent and Flat Fell from the slopes of Blakeley Raise

Being so close to Ennerdale Water, we thought it opportune to return to Ennerdale Bridge for a stroll along the western edge of the lake. As far as we could recall, we had only been to lower Ennerdale once before, parking at the other car park near Bowness Knott, and on that occasion it was under cloud. This time we had a magnificent view along the 2Ω mile length of the lake, with the hills of Bowness Knott to the north and Anglersí Crag to the south framing the distant peaks, in particular Pillar and Steeple. Ennerdale Water is the only one of the sixteen lakes not to have a road along its length. The serenity of the scene is also enhanced by boating not being allowed on the lake. Swimming is not allowed either but there were three swimmers, one of whom was a dog.

After decades of criticism that the regimented lines of conifer plantations had ruined the valley, Ennerdale is now well into a ërewilding programmeí. This topic is perhaps better considered in these pages when we (or I) have been able to walk further up the valley. For now, I need only say that the Ennerdale slopes looked perfectly natural from this vantage point. In fact, Iíd say that this view from the foot of Ennerdale is the best of all the views from the feet of the Lake District lakes. The usual view of Wasdale, voted Englandís No 1 view, is actually not from the foot but from half-way up the northern side, in order to include the Scafells. Most of the other lakes are either not straight enough to see in all their glory or they have their best peaks off to the side or they are cluttered with human intrusions. 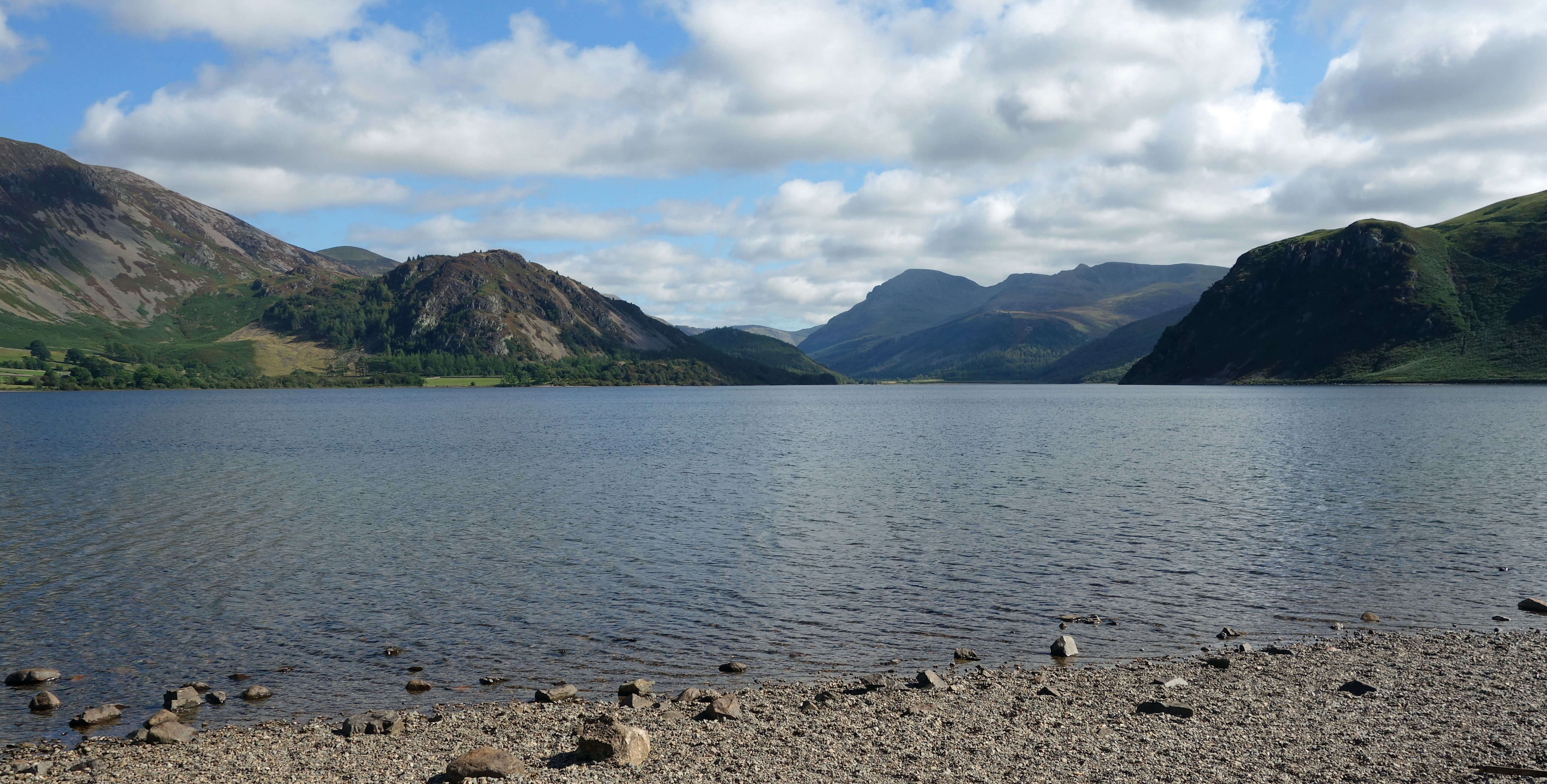 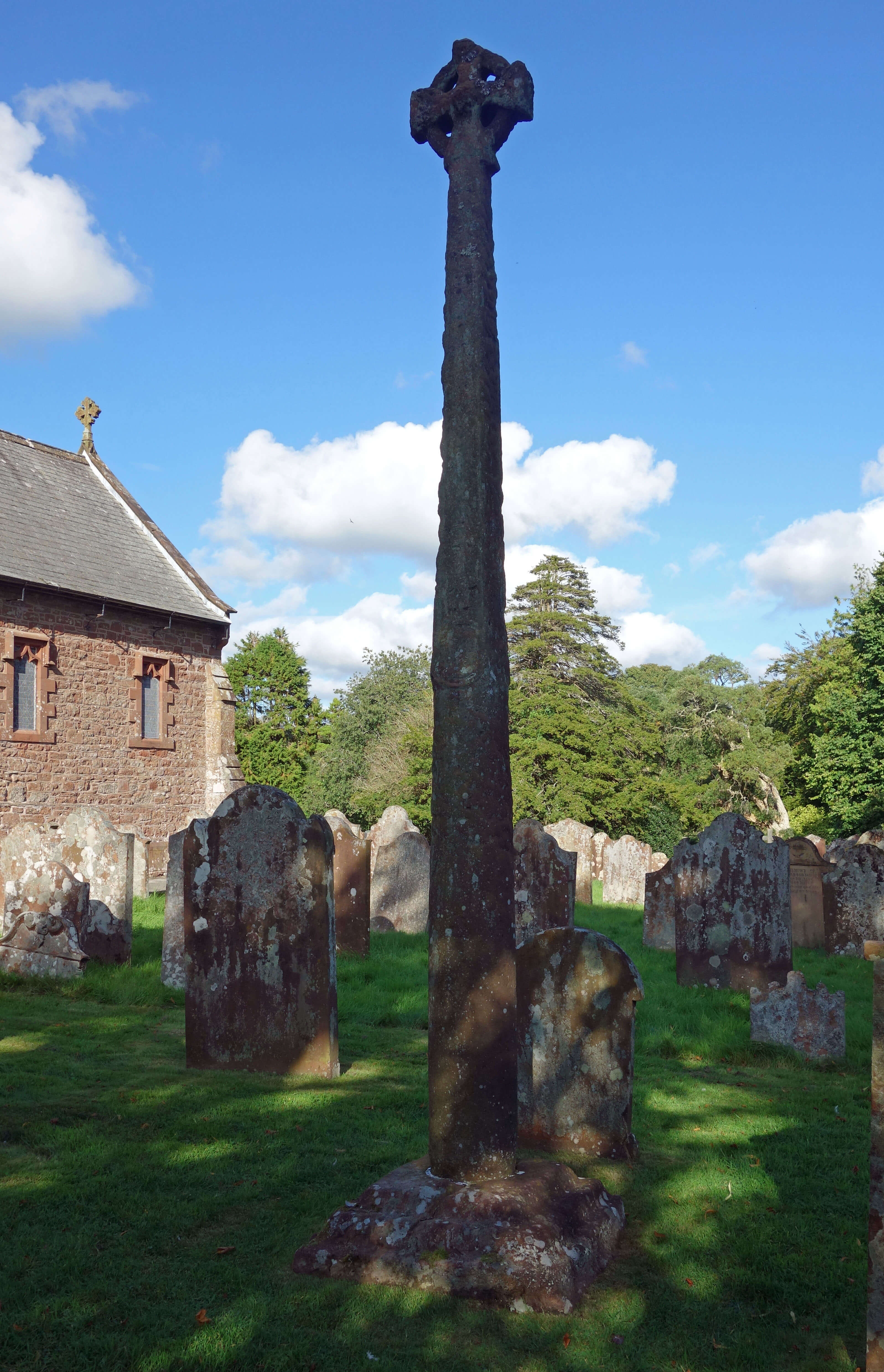 We drove west to take the A595 south through Cleator Moor and Egremont, two small towns that are not within the National Park, and we could see why. In appearance, they are quite unlike the towns and villages of central Lake District. The sturdy white terraces are distinguished by the solid, wide frames of every window and door, painted a different colour on each house. Cleator Moor was created in the 19th century as an iron-mining community, with Egremont being a market town that had been the centre of the local iron industry since medieval times. The iron industry had ended by the 1930s and it would take more than a zip through on the A595 to notice signs of it today.

At Calder Bridge the A595 becomes the National Park border, so Gosforth, where we were staying, just east of the A595 is within the Lake District National Park, although youíd never know it from its appearance. We walked along the main road (which is not designed for walkers) to the most remarked upon feature of Gosforth, the 10th century cross at St Maryís church. The cross stands tall among a packed army of high gravestones and is decorated with scenes from Norse mythology. One side of the column, for example, apparently shows the Norse god Loki bound, with his wife Sigyn catching the venom of the serpent who drips poison into his eyes until the coming of Ragnarok. It is amazing what experts are able to read into such weather-worn carvings.

And then we settled down for a meal at the only pub we know with a 'pony park' (not that we had a pony to park) and to spend our first night in the Lake District (just) since 2018.