I haven't taken our usual route, the A591, into central Lakeland for eighteen months (since travelling to Grasmere to walk to Grisedale Tarn, in 65). We didnít take it on this occasion either, stopping instead to walk around the limestone escarpment of Scout Scar, west of Kendal. We werenít entirely sure whether central Lakeland was quite ready to welcome us yet.

We walked north above Cunswick Scar. It was a warm, sunny, windless day that made it too hazy for us to recognise many of our long-neglected hills. The Whinfell ridge could be identified but the aerials on it were almost invisible. The Howgills stood like distant velvet curtains, with no discernible detail. On this occasion, therefore, we would have to forget the long-distance views for which Scout Scar is known and focus instead on what is nearby.

Taking the steep diagonal path, we dropped down to pass Cunswick Tarn. Reeds prevented a good view of the tarn, which is, I understand, an entirely natural tarn (and not one created for the nearby Cunswick Hall) that sits upon an impermeable slate layer below the limestone cliffs. Past the hall we reached the ancient Gamblesmire Lane, a delightful lane that has retained a fair smattering of wild flowers in its hedges ñ bluebells, celandines, daffodils, trefoils, violets, wood anemones. It was silent apart from a noisy green woodpecker. 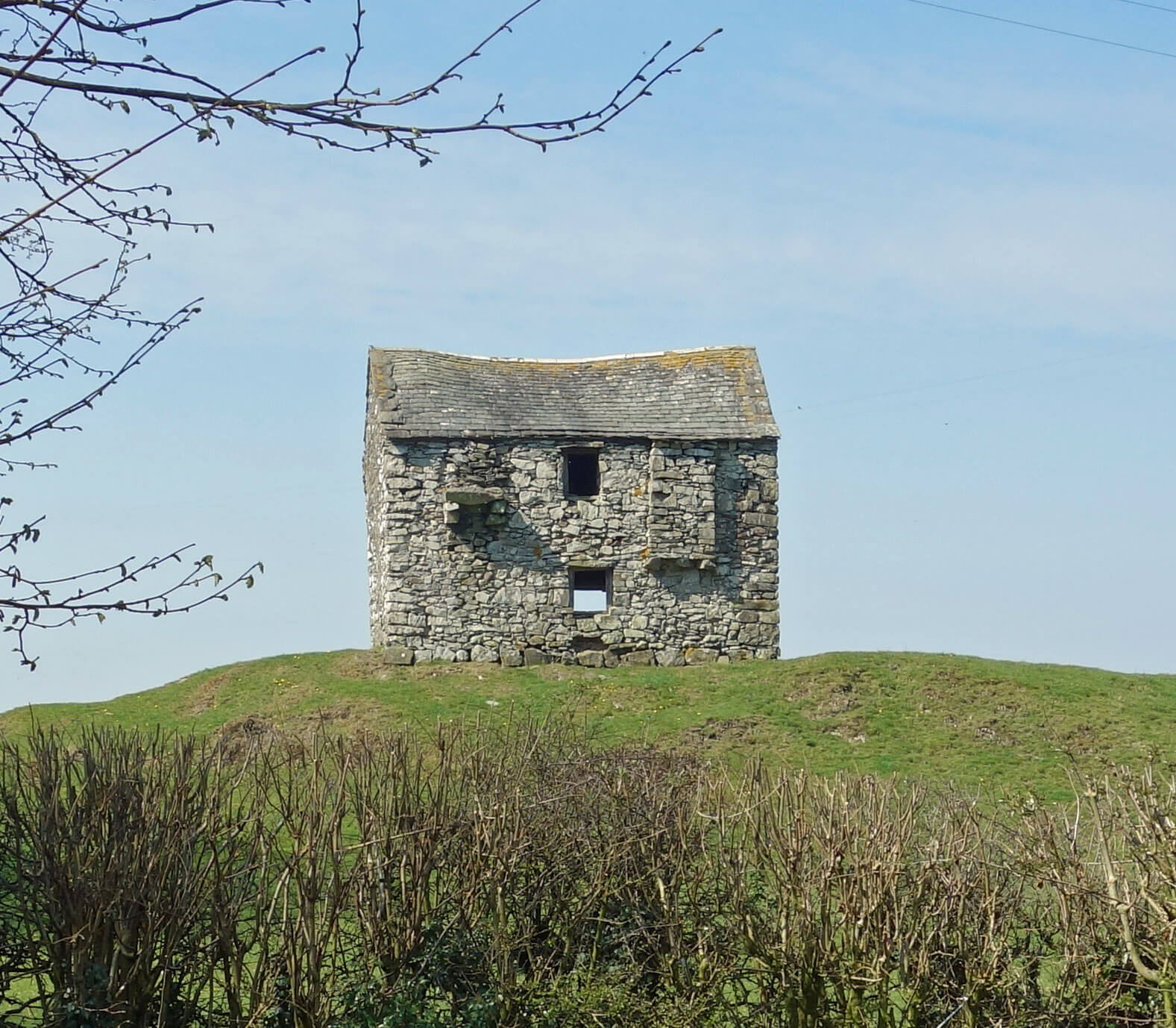 Turning south from the lane we passed some rocky ridges in the fields. I wonít pretend to be competent enough to identify the species of rock ñ but I am confident that it isnít limestone. The limestone cliffs towered to the left and the green Lyth Valley spread to the right, whilst we walked past flowering gorse bushes and through fields of lambs with their mothers. Garth Row Lane was another quiet lane, which we left to walk through the woodland of Barrowfield Lot, where there was much less wood than there used to be because of recent felling. A buzzard circled lazily above. I had read in Jan Wiltshireís excellent little book About Scout Scar (Wiltshire, 2008) that thereís April blossom in Barrowfieldís damson orchard. However, what we assumed to be the orchard had only two damson trees. Perhaps damsons are less valued nowadays. In any case, the damson blossom was nothing compared to the exuberant blackthorn elsewhere. Still, Barrowfield has an enviable location, sheltered within woodland below the cliffs of Scout Scar.

We continued south around the foot of Scout Scar into the enclosed area managed by the National Trust, where it feels more like parkland, with mature trees, than on the open fell. We came hoping to find some of the flora and fauna described in Wiltshireís book. The book is organised as a diary, over several years. The trouble is that these selected entries give the impression that the flora and fauna are rampantly abundant all the time. Judging by the number of mentions, we are, for example, in April bound to hear wheatear singing everywhere. Sadly, in the whole mile along the limestone ridge we hardly saw or heard a single bird. It wasnít that we couldnít identify the birds (as is usually the case): we couldnít see or hear any birds to identify. The scar was silent. This normally suits me fine but here it seemed unnatural, as if there was something amiss with the world. This scar really should not be devoid of birds. Perhaps the unaccustomed warmth had led them to siesta. Perhaps the stillness had eliminated their insects from the air. Perhaps there are too many walkers on this ridge for birds.

We fared no better with the flora. Of course, the scrubby ash, hawthorn and juniper couldnít be missed but we did miss the early purple orchids and rue-leaved saxifrages mentioned in the April entries. The recent lack of rain had made the area so parched that it was hard to imagine that any flowers would flourish. The only dash of colour we saw was from a few plants that gave passable imitations of dandelions. Perhaps they were dandelions.

Scout and Cunswick Scars has been designated a Site of Special Scientific Interest for its flora and fauna, although we saw little of it. We saw little of the surrounding hills either because of the haziness ñ for example, we could only just make out the distinctive shape of the Langdale Pikes. At the ëmushroomí, the shelter that provides a panoramic view of the surrounding hills, we looked inside the roof of the shelter to study the fine toposcope that shows, to all points of the compass, the hills that may be seen. But the toposcope had been removed, so we couldn't even see which hills we couldn't see. We didnít mind: it had been a good, varied, not too strenuous walk around the scar.


&nbsp129.   From the Delights of Downham to the Heights of Pendle
&nbsp127.   To Calf Top Top
A list of all Saunterings so far