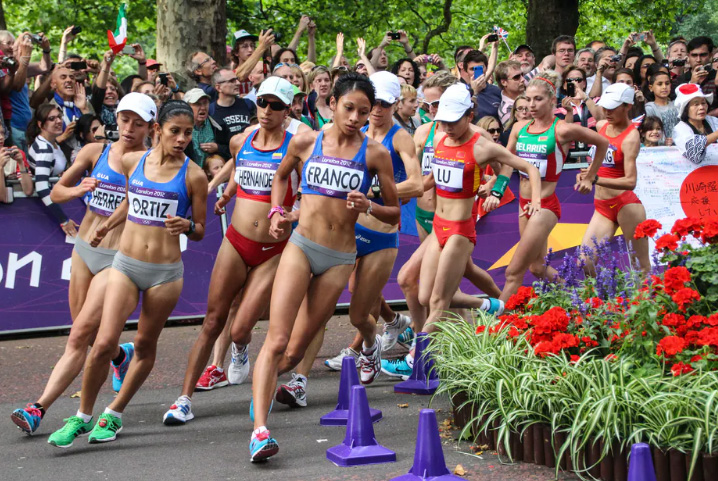 “Walking is not a sport” is the very first sentence of Frédéric Gros’s book A Philosophy of Walking (Gros, 2014). Gros should inform the International Olympics Committee. It has been awarding medals for walking since 1908 (the photo right is of the women’s 20 km walk at the 2012 London Olympics).

Wittgenstein famously wrote about the concept of a ‘game’, concluding that it was impossible to give a precise definition of the concept, since there is no one feature that formed a common element of all games. Instead, there is a complicated network of similarities and relationships, overlapping and criss-crossing. Gros is no Wittgenstein. He asserts that “sport is a matter of techniques and rules, scores and competition, necessitating lengthy training … and also obviously means cultivation of endurance, of a taste for effort, for discipline”. Walking is not a sport, he says, because “putting one foot in front of the other is child’s play”.

Maybe something has been lost in translation but this seems extraordinarily simplistic for a philosopher. I’d be more inclined to say that most sports are child’s play, or at least are derived from child’s play: running, swimming, jumping, kicking a ball, cycling, wrestling, and so on. Consider, for example, swimming. Most people can swim. Very few people swim competitively. When people go to their local swimming pool they usually go for exercise, for their mental and physical well-being, and maybe for camaraderie, but not for competition. Is swimming a sport? Is a swimming pool a sports facility?

Is walking less of a sport than swimming? If so, in what way? Some say that competitive walking looks weird – but at least there’s only one way to do it, as defined by the rules. There are several weird ways to do competitive swimming. Is there any other sport that you can do backwards? And ‘butterfly’, what’s that all about? Perhaps, to become recognised as a real sport, walking needs Olympics events for silly walks, as in the Ministry thereof. Even for ‘serious sports’ there’s a lot of silliness or childishness. I find it hard not to laugh at a rugby scrum, especially when it keeps collapsing. However, as the activity becomes more serious it becomes less sport. How often do we hear, usually about football, that “it’s not a game anymore; it’s a business”? Sport is a frivolous activity that is taken seriously but not too seriously. It occupies the space in the spectrum between pastime and business.

The second chapter of the venerable Baddeley (1880, 1922) guide to the Lake District is entitled “Sport in Lakeland”. It describes climbing (in 187 lines – I’m giving the number of lines to indicate the relative importance of the sport, according to Baddeley), angling (164 lines), fell-walking (56 lines), fox-hunting, beagles and otter hounds (38 lines), golf (28 lines), ice and snow sports (16 lines), yachting and boating (9 lines), tennis and bowls (5 lines) and swimming (0 lines). How many of those have the rules, scores and competition that Gros requires of a sport?

The entry on fell-walking is not as you might expect. It is not concerned at all with walks such as an amble up Loughrigg Fell. It is entirely about very long ‘walks’ up many fells. Fell-walking seems to have been included in the chapter on sport because a few people pursued extreme versions of it, which is odd because none of the other sections are concerned with extreme versions of the activity. The latest entry in the fell-walking section of my 1922 edition is a ‘walk’ of 21 hours 25 minutes over 19 named summits, covering 90 miles and involving a total ascent of 22,500 feet. Nobody can walk that distance over mountains in that time. It was a run, at least partly. It was clearly a competitive activity – to get to more tops or to get to them quicker. Today, there are fell-races and long-distance challenges and, of course, the activity of peak-bagging but most people on the fells are there, like those swimmers in the pool, river, sea or lake, for exercise, for their mental and physical well-being, and maybe for camaraderie.

Does it matter whether walking is a sport? Not really, except that I notice that the government’s roadmap out of lockdown says that, all being well (or at least a sufficient proportion of all being well), on March 29th “outdoor sports facilities such as tennis and basketball courts, and open-air swimming pools, will ... be allowed to reopen, and people will be able to take part in formally organised outdoor sports” and “the ‘stay at home’ rule will end”. People will be able to travel to swimming pools and then mingle with other people when using the changing rooms, showers, pools, and so on. Whether or not walking counts as an outdoor sport, it is surely safer for me to travel alone (or with Ruth), to mingle with nobody, to touch nothing, and to use as my ‘sports facility’ the natural world.

&nbspDate: March 27th 2021
&nbspStart: home;  &nbspRoute: various;  &nbspDistance: not far (but far enough to see that the herons (85) are nesting again and the sand martins (79) haven't arrived yet);  &nbspAscent: not much


&nbsp126.   Return to Roeburndale
&nbsp124.   The Most Prominent Hills of North-West England
A list of all Saunterings so far