The imminent presidential election has prompted me to re-read the article 'Walking' by the pioneering American environmentalist and philosopher of pedestrianism, Henry David Thoreau (1817-1862). Halfway through the piece Thoreau commented on his difficulty in deciding in which direction to walk from the doorstep of his home:

“I turn round and round irresolute sometimes for a quarter of an hour, until I decide, for a thousandth time, that I will walk into the southwest or west. Eastward I go only by force; but westward I go free.”

Walking westward is, he believed, the “prevailing tendency”, a natural inclination or instinct, like being drawn to a magnet of the west.

I am not a ditherer like Thoreau. I know where I'm going before I even get to the doorstep. You'd think that with this natural attraction to the west Thoreau would be off like a shot. However, I am walking all wrong. Whenever I walk from home I tend somehow to finish up back at home and although my geography is ropey I think this means that I have walked as far eastward as westward. To get the most from the Thoreau Theory that ‘west is best’ I need to walk on a line as straight as possible westward. So, rather than walk from home to Lancaster (as I did in 72), I asked Ruth to tip me out at Lowgill so that I could walk westward home. In this way, I would enjoy a walk in harmony with my westward instinct rather than be befuddled as with my usual circular walks.

The village of Lowgill lies along the line of the Roman road that runs from Ribchester over the Bowland hills. We (Ruth joined me until I reached the moor) headed west from the corner where the Roman road continued southward, walking down and up wooded slopes, through the autumn leaves, with a great deal of brown water in the Hindburn River, the becks and across the lane. My original intention was to walk across Goodber Common to Roeburndale. However, the map shows nothing at all on the common apart from miles of marsh with a worrying number of light blue squiggles that, after all the recent rain, would be dark and deep. It would be Thoreauly silly to walk due west and disappear into a quagmire. The moor was in cloud anyway and so was I, more or less.

Under cloud, with the Dales hills to the right and, in the distance, the Lakes hills, in sunshine

So instead I continued on the lofty, lonely, long lane all the way to Wray. Through the drizzle I could see the hills of the Lake District and Yorkshire Dales, the former in sunshine, the latter cloud-topped. As I walked along, the Dales clouds lifted and the Lakes sunshine approached across Morecambe Bay, so I was optimistic that I wouldn't be wet for long, and so it proved. It was uneventful but pleasant enough, looking over the Hindburn valley to the autumn colours of this well-treed region, passing deep green fields for sheep and the red-brown grasses of the untamed moor. In Wray I called in at the garden centre where I found a woman spending gaily (Ruth) and sat in the sun eating my sandwiches.

Thoreau proceeded to elaborate his ‘west is best’ Theory over several pages. It doesn’t apply only to walkers - whole nations are on the march westward:

“That way the nation is moving, and I may say that mankind progress from east to west. We go eastward to realize history and study the works of art and literature, retracing the steps of the race; we go westward as into the future, with a spirit of enterprise and adventure.”

The east is the past; the west is the future. He dismissed the contemporary counterexample of Australia because “the moral and physical character of the first generation of Australians has not yet proved a successful experiment”. Thoreau never felt a need or desire to visit Australia – or anywhere else outside North America.

Anybody walking westward from Wray on the B6480 will be thinking of the future only to the extent of wondering if they will have one. It is a busy road, scarcely wide enough for two lanes of traffic and certainly not for a walker as well. The road-side hedges are not welcoming either. I avoided the first part by walking along the muddy Back Lane but couldn't avoid the rest of the B6480 to the A683. The A683 was no better: wider but with faster traffic and again nowhere for walkers. How have we come to accept that roads are not for walkers? I escaped the A683 for a while by walking through Farleton, a village that, rather oddly, is a cul-de-sac and therefore has no through traffic.

The partially flooded Lune valley towards Hornby from Farleton

As for the causes of the Thoreau Theory of ‘west is best’, he offered two explanations. First, that it is the consequence of “something akin to the migratory instinct in birds and quadrupeds”. Quite why our instinct should be east-west when most migrations are north-south was not explained. Secondly, that we are inclined to follow the sun, which he seemed to consider to be a male deity: “He appears to migrate westward daily, and tempt us to follow him. He is the Great Western Pioneer whom the nations follow.” Unfortunately the sun was beginning to hide behind cloud over Claughton Moor but Thoreau may have a point here. Walkers do prefer to have the sun on their face. However, if we walked towards the sun we would not walk westward. We would walk in a graceful curve that mathematicians could prove to be a parabola, or hyperbola, or what? 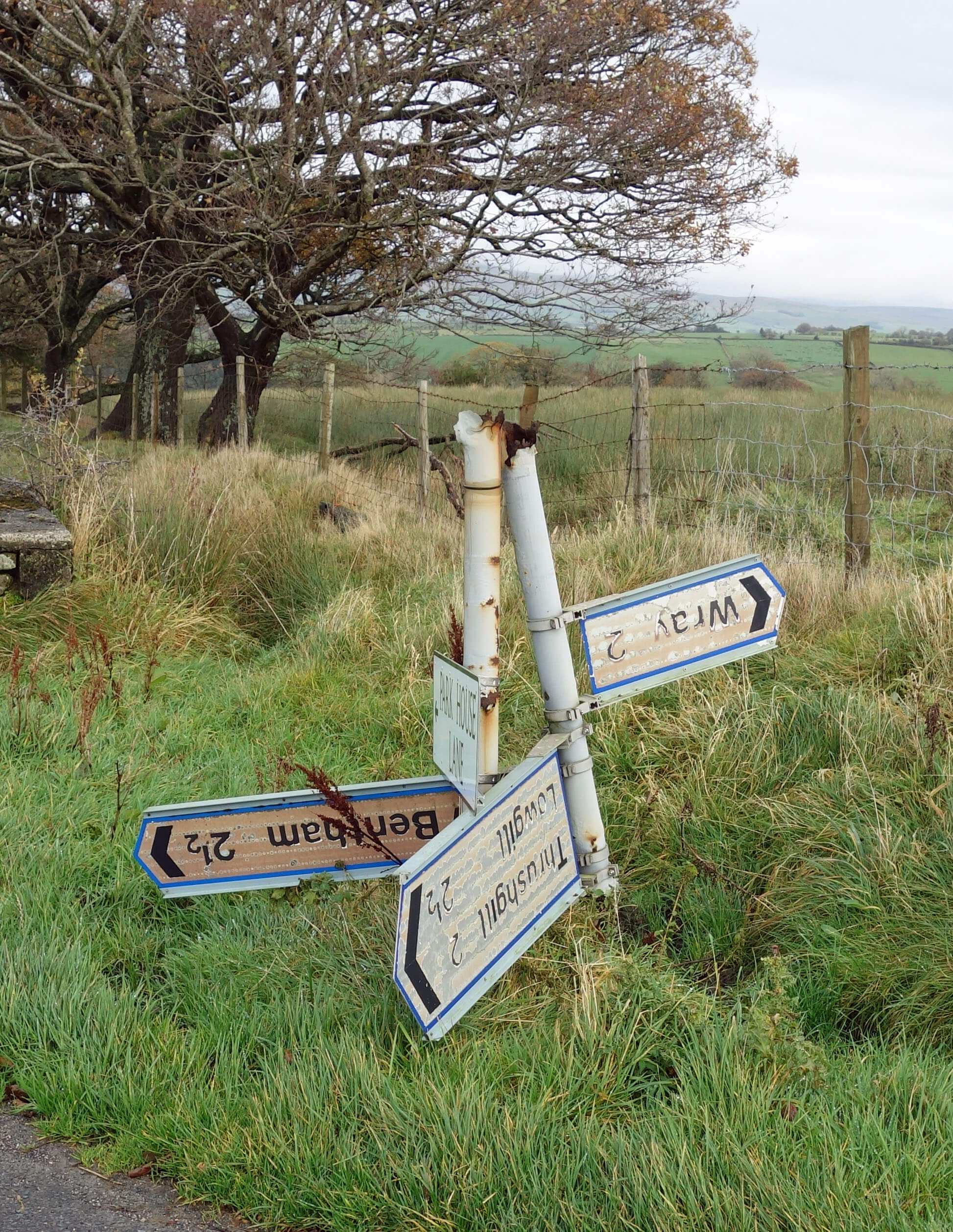 Left: A signpost that didn't help me walk westward.

Having established his ‘west is best’ Theory, Thoreau went on to consider its geopolitical implications. He said that:

“Columbus felt the westward tendency more strongly than any before. He obeyed it, and found a New World … Where on the globe can there be found an area of equal extent with that occupied by the bulk of our States, so fertile and so rich and varied in its productions? ... From this western impulse coming in contact with the barrier of the Atlantic sprang the commerce and enterprise of modern times ... If the heavens of America appear infinitely higher, and the stars brighter, I trust that these facts are symbolical of the height to which the philosophy and poetry and religion of her inhabitants may one day soar ... Else to what end does the world go on, and why was America discovered?”

Why indeed? The soaring heights of Americana are everything that make life worth living – John Dewey, Ezra Pound, Mike Pence, Ernest Hummingbird, Madonna ... But I need to brush up on my history. How do the civilisations of China, India, Africa, and elsewhere, including those of the old ‘New World’ (the Aztec, Inca and so on), as well as the Industrial Revolution, fit in? And why in our inexorable walk westward should we stop in America? We surely must walk on, westward, westward, across the Bering Strait ...

Having been borne aloft – or westward – on this exhilarating ‘west is best’ Theory, the reader is suddenly whisked in a different direction by Thoreau:

“The West of which I speak is but another name for the Wild; and what I have been preparing to say is, that in Wildness is the preservation of the World ... I would have every man so much like a wild antelope, so much a part and parcel of nature.”

Can the Earth support eight billion antelopes? Perhaps he meant ants. North America may have the 'Wild West' but it is something of an over-generalisation to equate 'west' and 'wild' everywhere. Given all this nonsense about the West, why should anyone take what Thoreau has to say about the Wild seriously? But some people do, presumably from feeling regret at a perceived loss of wildness rather than from the wisdom of Thoreau's words.

I had another two or three miles to walk along the A683 and the road through Caton Green. Overall, my walk did not support the Thoreau Theory of 'west is best' (of course). I felt no natural westward tendency. It is natural to walk home, but I'd feel that from whatever direction I approached it. Thoreau may have set off westward a thousand times but I am certain that I will walk westward home from Lowgill no more than once.

Most readers today will not persevere through Thoreau’s sanctimonious pretentiousness but they may wonder why a philosopher writing in 1862, ostensibly about walking, felt it appropriate to argue that ‘west is best’ and to include a paean to American greatness and superiority. Did his American readers at the time lap up this kind of thing? If so, perhaps it should be no surprise that today the United States follows the enhanced, sophisticated, 21st century political doctrine: ‘west is best, stuff the rest’. Will it after November 3rd?


&nbsp109.   Fair Snape: the Fairest Fell of Bowland
&nbsp107.   Along the Sands from Millom to Silecroft
A list of all Saunterings so far